New Congresswoman Who Dropped the MF Bomb When Calling for Trump's Impeachment Just Responded to Her Detractors, and She Has No F***s to Give

She is not backing down. 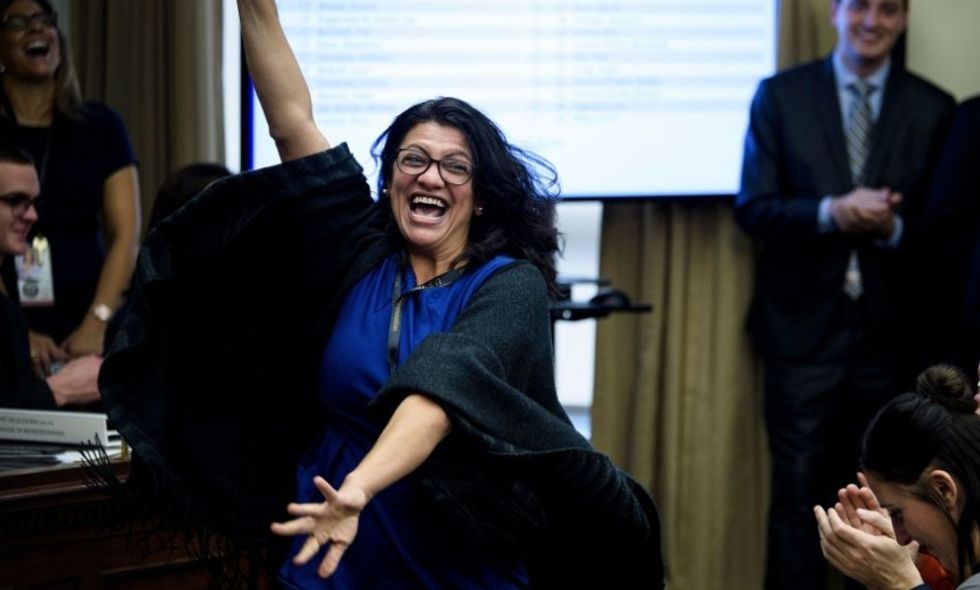 Democrats everywhere had a triumphant day after their party officially regained control of the House of Representatives with the most diverse congress in history.

Freshman Congresswoman Rashida Tlaib (D-MI) wasn't shy about her invigoration when speaking to supporters at an event on the night of her swearing in.

"when your son looks at you and says ‘mama, look you won, bullies don’t win.’ And I say ‘baby, they don’t’ because we’re gonna go in there and we’re gonna impeach the motherf***er.”

Congresswoman Tlaib was met with cheers in the room, but the reception online was mixed. Some said that her words were an inadvertent gift to President Donald Trump. Others reminded them that the President was elected only days after a tape of him bragging about grabbing women by their private parts without consent leaked online. In addition, Tlaib is one of the first Muslim women elected to Congress. Her election and swearing in have come during a presidency that has targeted Muslims at home and abroad.

For Tlaib's part, she's not backing down.

This is not just about Donald Trump. This is about all of us. In the face of this constitutional crisis, we must rise.
— Rashida Tlaib (@Rashida Tlaib) 1546612066.0

The reaction was again mixed. Some insisted that her words paled in comparison to the atrocities committed during the tenure of the Trump administration. Not to mention, Trump used the same word when discussing China.

As have other notable Republicans.

Many praised her for standing by her statement.

Other Democrats agreed with her words but implored her to put them more palatably.

@RashidaTlaib Please do not get caught up in the vitriol! Just di a good job and the rest will follow!
— Sharon Coleman (@Sharon Coleman) 1546615516.0

@RashidaTlaib Please stop the talks of impeachment. It only makes his base stronger. Sit tight and see what happens… https://t.co/abiqkqQO6T
— TheRealSethW (@TheRealSethW) 1546615441.0

@RashidaTlaib I dont appreciate the hypocrites attacking you and not calling out POTUS for far worse. But you shoul… https://t.co/8WK5GyOeoW
— Tara Saia (@Tara Saia) 1546614000.0

Believe it or not, Republicans were divided as well.

Some Republicans were thanking her.

@RealKyleMorris This is actually great to see. Thank you @RashidaTlaib I have a feeling that Democrats conduct over… https://t.co/yCsFtuCNoR
— Kemba (@Kemba) 1546580383.0

@RashidaTlaib We are in a Constitutional crisis because as a newcomer, you make it that way. @realDonaldTrump is yo… https://t.co/gmijq9FT7G
— Karen H Turner (@Karen H Turner) 1546617722.0

But while Republicans were chastising her for disrespect, there was no shortage of Islamophobic rhetoric from the right.

@RashidaTlaib Your a Loser and your heart is not right. President Donald Trump has the Lord Almighty (the God of Ab… https://t.co/DvQIzXitrt
— Lady Bird Rose (@Lady Bird Rose) 1546619042.0

With hatred like this finding its mouthpiece in the Oval Office, maybe an F-bomb isn't the most atrocious thing plaguing the United States.