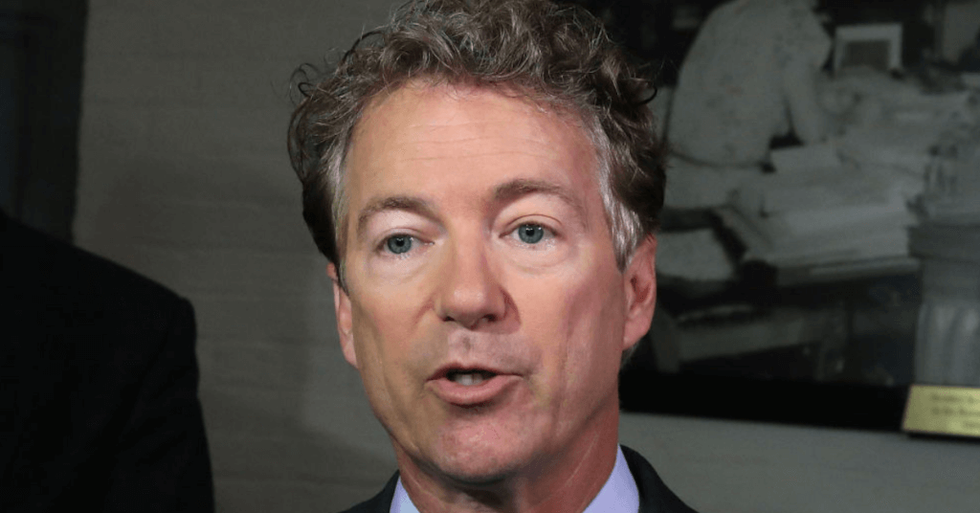 The Trump administration has performed victory laps since the Mueller report––or shall we say Attorney General William Barr’s summary of the Mueller report––was released. The Mueller report, according to a letter penned by Barr on Friday, found insufficient evidence that President Donald Trump or members of his campaign “conspired or coordinated with the Russian government in its election interference activities."

The battle to release the full report is well underway, but this hasn't stopped prominent Republicans, like commentator Kimberly Guilfoyle, the girlfriend of Donald Trump Jr., from suggesting that the matter is settled and that Congress must investigate those who propagated the "Russia hoax."

Guilfoyle has an even more prominent supporter in Senator Rand Paul (R-KY), who concurred with an assessment she penned for The Daily Caller. In fact, he suggested Congress should begin by investigating former President Barack Obama.

"What did President Obama know and when? How did this hoax go on for so long unabated?" he wrote.

I agree with @kimguilfoyle Time for Congress to investigate. What did President Obama know and when? How did this h… https://t.co/utWH5rymk7
— Senator Rand Paul (@Senator Rand Paul) 1553698280.0

Paul was immediately savaged by critics. As others pointed out, Mitch McConnell, the Senate Majority Leader, has already blocked two resolutions to release the full Mueller report.

@RandPaul @kimguilfoyle Great, so yet another elected official taking marching orders from a Fox News personality.… https://t.co/nZUimU4Gk5
— Commit to Vote (@Commit to Vote) 1553704552.0

In 2016, the FBI informed Obama that the bureau was investigating Russian attempts to interfere in the presidential election. Senator Mitch McConnell warned Obama against going public with the news, and said he would consider any attempt by the Obama administration to challenge the Russians publicly a partisan act.

Other Republicans who attended the briefing expressed concerns about going public with the allegations in the final stages of an election, arguing that they would only strike a blow to already shaken public confidence and give Moscow the upper hand.

Tim Murtaugh, the Trump campaign’s Director of Communications, sent a memo to television producers blasting Democrats and television networks for “lying to the American people by vigorously and repeatedly claiming there was evidence of collusion" and included a list of Trump critics, including Senator Richard Blumenthal (CT) and Representative Adam Schiff (CA), who should be scrutinized.

Sanders asked her following to answer which of the president’s “angry and hysterical haters got it most embarrassingly wrong?”

Mueller Madness! Which of the angry and hysterical @realDonaldTrump haters got it most embarrassingly wrong?… https://t.co/ne49uph9XH
— Stephanie Grisham (@Stephanie Grisham) 1553563087.0

The president, meanwhile, has continued to assail the media and regularly tweets analysis from Fox News pundits.

Senator Dianne Feinstein (CA), the top Democrat on the Judiciary Committee and a member of the Intelligence Committee, managed to get unanimous support to release the Mueller report in the House, but McConnell blocked her efforts in the Senate.

"The fact is that a four-page summary cannot possibly illuminate what this thorough of an investigation uncovered. I find it so disappointing that so many are rushing to judgement without being able to see the full report or all of the underlying facts," Feinstein said.

McConnell objected, saying Barr is currently working with Mueller to determine what to redact from the report in the interest of national security.

"I have consistently supported the proposition that his report ought to be released to the greatest extent possible, consistent with the law. … I think we should be consistent in letting the special counsel actually finish his work and not just when we think it may be politically advantageous to one side or the other," he said.