People Can't Stop Calling Rand Paul a Hypocrite for Planning to Go to Canada for an Operation, and His Office Just Responded 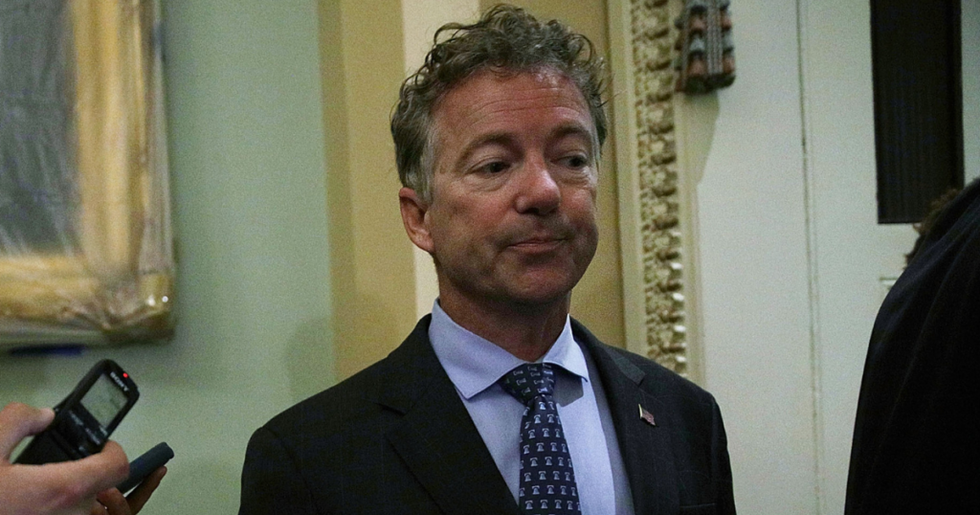 WASHINGTON, DC - MAY 09: U.S. Sen. Rand Paul (R-KY) (R) is approached by members of the media as he arrives at the weekly Senate Republican Policy Luncheon at the Capitol May 9, 2017 in Washington, DC. Senate Republican held a policy luncheon to discuss GOP agenda. (Photo by Alex Wong/Getty Images)

Senator Rand Paul (R-KY), who opposes socialized medicine and the concept of health care as a fundamental human right, will travel to Canada for surgery later this month.

Paul was attacked by a neighbor in 2017 while mowing his lawn, resulting in six broken ribs and a bruised lung.

The Courier Journal reported on Monday that Paul will be receiving treatment at Shouldice Hernia Hospital in Thornhill, Ontario, which tout itself as "the global leader in non-mesh hernia repair," late next week."

"While Shouldice Hernia Hospital is privately owned -" the Courier Journal wrote, "like many Canadian hospitals — it receives a majority of its funding from the Ontario government and accepts the Ontario’s Hospital Insurance Plan."

Paul has equated universal health care to "slavery," among other things.

“With regard to the idea whether or not you have a right to health care ... It means you believe in slavery," Paul said in 2011. "You are going to enslave not only me but the janitor at my hospital, the person who cleans my office, the assistants, the nurses. … You are basically saying you believe in slavery.”

“This is more fake news on a story that has been terribly reported from day one — this is a private, world-renowned hospital separate from any system and people come from around the world to pay cash for their services."

@fawfulfan Don't believe his spin about it being a private hospital either, OHIP (Ontario's health insurance plan)… https://t.co/EZn6yqYAr5
— Jackie (@Jackie) 1547492000.0

So much for Paul's fears about socialized medicine.

@fawfulfan Oh, but what about those scary long cues you were warning Americans about in Canada Rand Paul? When push… https://t.co/U2iTBIBdRW
— Woman Voter (@Woman Voter) 1547495616.0

@krassenstein Reminds me of Ted Cruz signing up for Obamacare when he was running for president since his wife stop… https://t.co/p2vQPiv7VN
— Eileen Ellis (@Eileen Ellis) 1547489857.0

The irony is rich.

What does this say about our for-profit health care system, which Paul so vehemently defends?

Prior to his election to the Senate, Paul was an opthamologist, so this comment takes the crown:

Shocked, I tell you. Shocked.