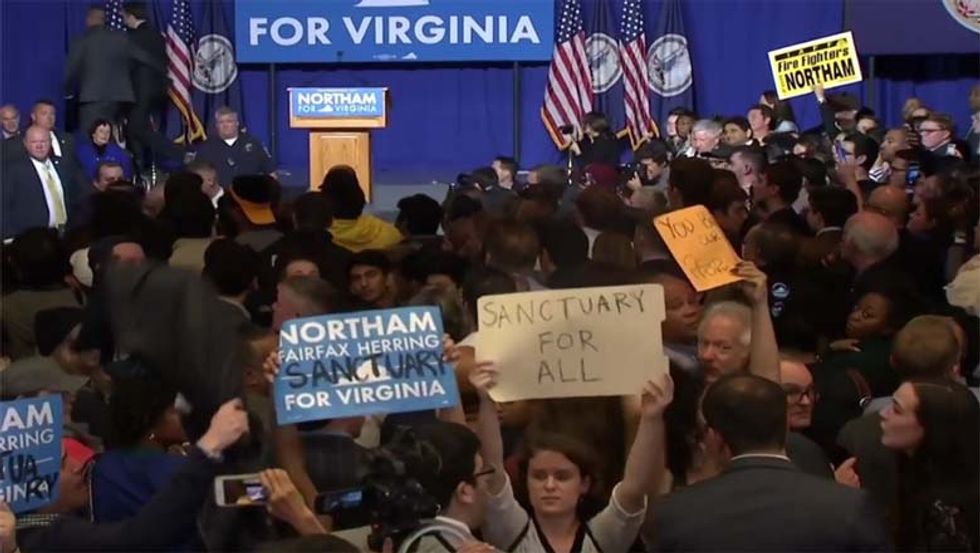 Tonight, prior to Democrat Ralph Northam's victory speech, protesters holding signs about sanctuary interrupted the celebration in Virginia. The signs were about immigration, which Northam has been noticeably ambivalent about. According to The Daily Caller, "Northam has proven unwilling to adopt a definitive stance on the question of whether illegal immigrants should be allowed to remain in the country."

Weeks prior to tonight's election, Republican Ed Gillespie opponent took an alternate side, calling Northam weak on immigration, reports The Washington Times. The exchange happened at a final debate between the two men.

However, immigration may be the key to Northam's win, particularly in the northern area of the state. The New York Times writes, "With its thriving technology sector and data centers that sprout up like the crops that preceded them on one-time farmland, Northern Virginia is the economic engine of the state, attracting a diverse, highly skilled and well-paid work force, many of them immigrants."

Despite his unclear immigration stance, prior to tonight's results, Trump has been vehemently against Northam. This morning, Trump tweeted about Northam, saying, "Ralph Northam will allow crime to be rampant in Virginia. He’s weak on crime, weak on our GREAT VETS, Anti-Second Amendment, and has been horrible on Virginia economy."

Trump has since commented on Northam's win:

In 2016, Hillary Clinton won Virginia by 5.4%, leading many to believe that the governor's race was Northam's to lose. But Gillespie has kept it close by running on divisive cultural issues Donald Trump has used to instill fear and exploit divisions, such as the Colombian MS 13 gang, the Confederate monuments, and the NFL's national anthem protests. The Washington Post editorial board went so far as to condemn Gillespie's campaign for these tactics.