We Now Know Whose Job in the Trump Administration Scott Pruitt Really Wants, and It Explains a Lot 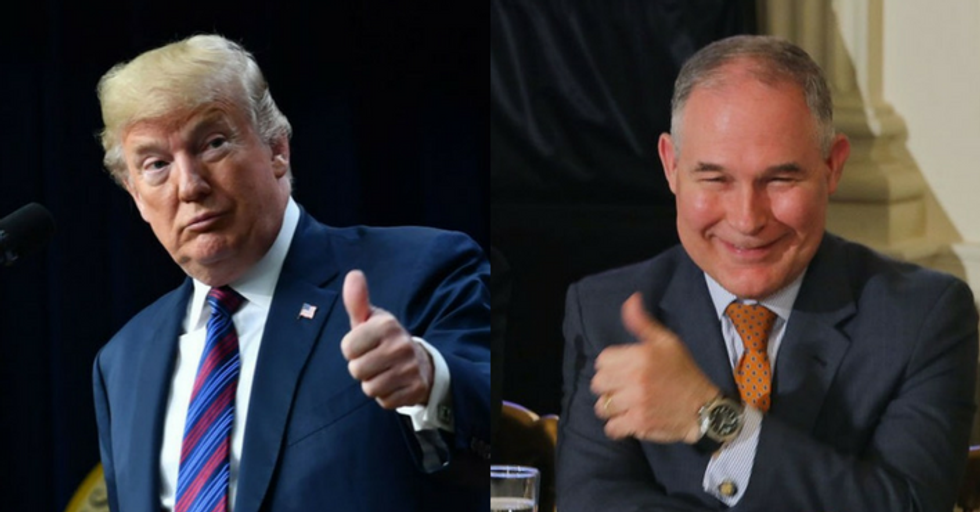 Trump's head of the Environmental Protection Agency (EPA), Scott Pruitt, has a career in government plagued by scandal. His woes began even before he was appointed to federal office by President Donald Trump.

During his time as Attorney General of Oklahoma, Pruitt faced numerous allegations of conflict of interest due to his close dealings with private industry. Several of the relationships proved profitable for Pruitt.

In February 2017, Pruitt was ordered by the Oklahoma District Court to release thousands of email communications with fossil fuel industry representatives. The documents showed that while serving as Oklahoma attorney general, Pruitt "acted in close concert with oil and gas companies to challenge environmental regulations, even putting his letterhead to a complaint filed by one firm."

Since joining the Trump administration, at least 170 members of congress, including Republicans, asked for Pruitt to resign in a resolution signed in April 2018.

In case the Trump news cycle distracted you: Scott Pruitt is one of the most corrupt Cabinet officials in history.… https://t.co/jLvlyTZPLm
— Tina Smith (@Tina Smith) 1530633530.0

And at least one member of the general public, featured in a now viral video, asked Pruitt directly to "do the right thing" and resign as well.

Allegations of out of control spending, bizarre used mattress requests, below cost Washington DC housing provided by a lobbyist and use of a non-government email server (but his emails) are only a few of the troubling stories to come out of Pruitt's tenure with the EPA.

So what better job for Pruitt than head of the agency that investigates corruption and illegal activities?

No, not the EPA, the Department of Justice. Turns out Scott Pruitt, despite vowing for years to destroy the EPA, really wants another job in the Trump administration.

That job is currently occupied by Jeff Sessions. Scandal ridden Scott Pruitt, currently facing at least 14 federal probes into his activities, thinks he's just the right man to be Attorney General of the United States of America.

According to a new report, Pruitt directly asked the president to fire Jeff Sessions from his position as head of the Department of Justice so he can take over the job of Attorney General. To sweeten the deal, Pruitt vowed he'd only remain in the position for 210 days under the Vacancies Reform Act (VRA) then return to Oklahoma to run for an unnamed office.

The VRA allows a president to appoint an acting agency head for up to 210 days without congressional hearings or confirmation being required. It was intended to fill vacancies in the case of emergencies, not to subvert the congressional vetting process.

To date, Trump has relied on the VRA more than any president before him.

Trump remains highly critical of the Department of Justice for investigating his campaign, his family members, his lawyer and Russia. The president frequently states that Sessions should not have recused himself from the Mueller Russia investigation or allowed any of the other investigations into his concerns currently being conducted by the DoJ.

However, as evidenced by Sessions retention of the office of Attorney General and Pruitt still head of the EPA, the president was not persuaded to make the change.

When Trump was asked in June if he planned to fire Pruitt, he declined to answer, but noted the "fantastic job" Pruitt has done.

"I'm not happy about certain things, I'll be honest," Trump remarked without elaboration.

The EPA's own spokesperson, when asked about the Pruitt job request, would only say the agency "will not be commenting on anonymous sources who are working to distract Americans from the Trump Administration's accomplishments on regulatory certainty and environmental stewardship."

For now at least, it looks as though all the players in the Trump cabinet will remain where they are.