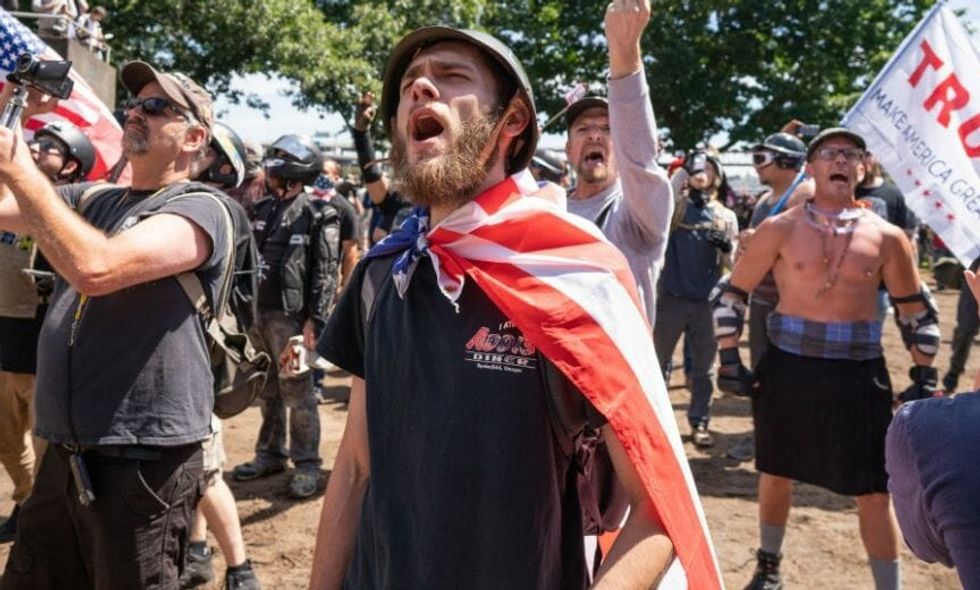 The far-right neo-fascist group Proud Boys describes its members as "western chauvinists." The group paints itself as a Conservative fraternal organization, and its racist, homophobic members frequently incite violence at their demonstrations.

This Saturday, the Proud Boys will descend upon Portland, Oregon to protest antifascists, or Antifa. Fears are mounting that the pro-fascist organizers promoting white supremacy in the streets will lead to violent clashes, as happened last year at a similar events between the two in Portland.

Now activist group network Popular Mobilization (PopMob) is teaming up with Oregon-based immigrants' rights organization Causa to use the pro-fascist presence to raise money for immigrants.

Supporters of the cause are pledging a certain amount of money for each fascist that shows up to spread his hate. If 10 supporters pledge a dollar per fascist and 300 fascists show up, that's $3000 raised for immigrants rights thanks to the presence of shameless Proud Boys.

“Every one of the fascists that shows up is raising money for a cause that they hate.”

And people are digging the idea.

The current total according to PopMob is $52.85 per fascist. Last year's rally attendance was put at "a few hundred" by local news outlets, so the Proud Boys will likely be doing a huge service to immigrants' rights for once.

As PopMob notes, a similar effort was done to great success in Germany when Nazis marched in the streets. Residents pledged a certain amount per meter the Nazis walked and ended up raising over 100,000 Euros.

After last year's bloody rally, people are already gearing up for violence—and preparing for right wing groups to paint Antifa as instigators.

One of the event's organizers, Joe Biggs, recently received a visit from the FBI after Facebook posts promoting violence against Antifa at the event. He then called for his supporters to tone down the rhetoric.

You can donate to Causa here. You can also make a pledge in the replies to PopMob's tweet.