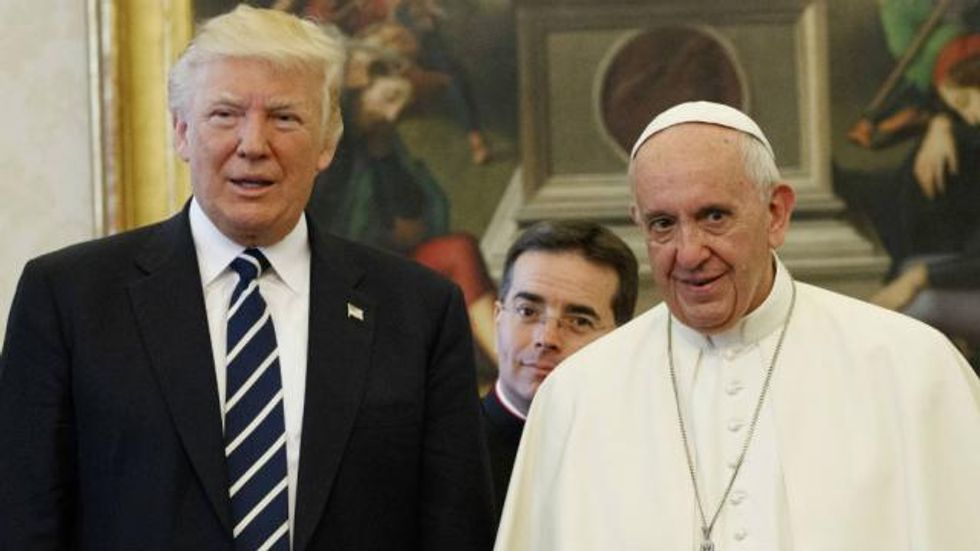 While en route from Colombia to Rome, Pope Francis shared with journalists a passage from Psalms about the stubbornness of man as they flew over the devastation of Hurricane Irma in the Caribbean:

The pope was speaking pointedly of those who continue to deny the effects of climate change, including President Trump. “Those who deny climate change need to go to scientists and ask them,” he said. He went on to say that the science and evidence linking human activity to storms such as Irma is clear and precise, and that we all have a moral responsibility to confront climate change.

I encourage world leaders to set aside partisan and ideological interests and seek together the common good of all humanity.
— Pope Francis (@Pope Francis) 1505215800.0

Back in May, Pope Francis gave Trump a copy of his 2015 encyclical letter on climate change, which called for a human response to turn the tides of global warming. Trump has been a longtime skeptic, pulling out of the Paris Agreement earlier this year, and his administration has been no different.

While climate scientists are adamantly saying that storms such as Harvey and Irma were made worse by climate change, Trump’s appointed head of the Environment Protection Agency Scott Pruitt said last week that “to have any kind of focus on the cause and effect of the storm, versus helping people, or actually facing the effect of the storm, is misplaced.”

On the same flight Pope Francis also appealed to Trump to reverse his decision to end President Obama’s Deferred Action for Children Program, known as DACA. “I hope they rethink it a bit,” the pope said regarding Trump.

“Because I heard the U.S. president speak. He presents himself as a man who is pro-life. If he is a good pro-life believer he must understand that family is the cradle of life and one must defend its unity.”

Previously, the pope has said that advocates and supporters of Trump’s border wall between the United States and Mexico to keep out migrants were “not Christian.”