Trump's Homeland Security Chief Made a Questionable Claim About Immigration From Central America, and Politifact Just Clapped Back 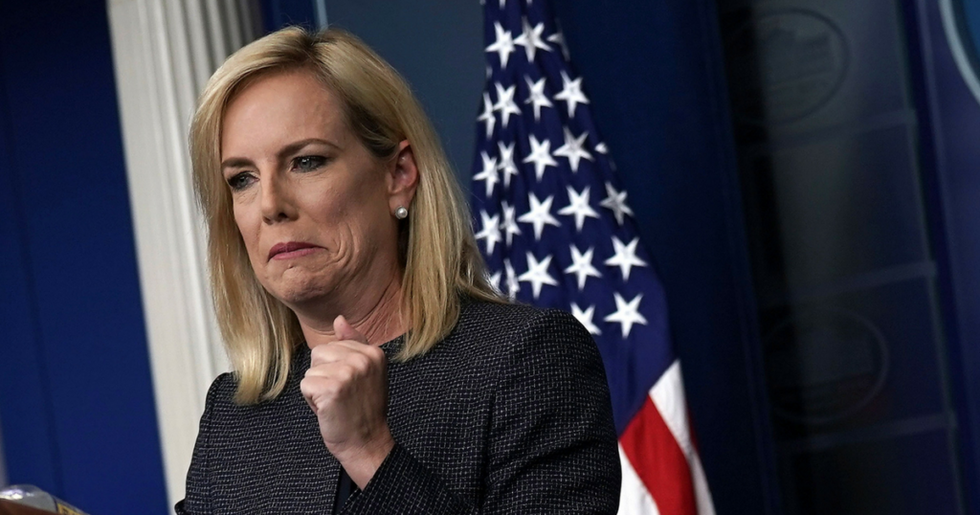 Last Thursday, Homeland Security Secretary Kirstjen Nielsen claimed that billboards in Central America were encouraging those looking to emigrate to the United States to do so illegally.

"There are billboards in Central America in the Northern Triangle countries advertising how to grab a kid to get into the United States illegally. Because that loophole is so big," Nielsen said, citing a Department of Health & Human Services statistic that "10,000 unaccompanied children are in DHHS care."

That's 10,000 children whose parents sent them on this journey without any parental supervision; with smugglers, with traffickers, with other adults.

On Monday, the fact-checking website Politifact rated Nielsen's claim as "false," noting there is no evidence that such billboards exist.

"PolitiFact was unable to find any evidence of the billboards Nielsen described," Politifact wrote. The group said it reached out to Nielsen's office asking for documentation of the billboards the secretary was describing, but have not received a response.

Politifact stated that experts familiar with the regions from which people are trying to get into the United States, specifically El Salvador, Honduras, and Guatemala, "have traveled to Central America told us they have never heard of or seen such billboards."

You can watch the full interview here:

In fact, as Politifact pointed out, the only billboards that have been erected in the "Northern Triangle" were put in place by the Obama administration, "but their goal was to deter illegal immigration, not encourage it." The billboards were actually implemented to discourage people from coming to the United States from El Salvador, Honduras, and Guatemala.

Poverty and violence are the primary reasons people flee those countries, according to Politifact.

Politifact also corrected Nielsen's claim that immigrants "grab a kid to get into the United States illegally." American immigration law does not determine entry based on whether or not an immigrant is traveling with a child, Politifact said, adding: "the law allows parents and children to apply for asylum in the United States, even if they entered the country illegally."

"I did not see a single billboard related to migration, and definitely not promoting migration," Stephanie Leutert, director of the Mexico Security Initiative at the University of Texas at Austin, said. "The only thing I saw/heard while on the country's highways was an announcement on the bus radio warning would-be migrants of the dangers of traveling to the United States and how smugglers might abandon them in the desert."

Leutert recently returned from a three-week trek through Guatemala, wherein she gave no indication there were any billboards or notices giving instructions on how to enter the United States.

Leutert added that Guatemalans are under the assumption that asylum-seekers without children can be expected to be detained for the duration of their case, and that those will children may be released temporarily with an ankle monitor.

"However, this was 100 percent not due to any potential billboard, as this is not how people get their information related to U.S. migration policy," Leutert said. She noted that those looking to come to the United States hear about American border policy through social networks, friends, and family who have made the journey.

Twitter shared its thoughts on Nielsen's remarks, with users blasting the administration's "zero tolerance" policy that ripped children from their parents at the border. Voices on social media blasted Nielsen for what they see as more lies about Trump's treatment of immigrants.

@PolitiFact @SecNielsen Goodness @SecNielsen you're having difficulty telling the truth these days. Does ANYONE in… https://t.co/u9JfwPHfGK
— S Graham (@S Graham) 1532367872.0

Last month, a federal judge ordered the administration to reunite thousands of migrant children with their families, however, there was no plan in place to do so when Attorney General Jeff Sessions first announced the policy in April, and the majority of displaced minors remain in federal custody.

Nielsen also came under fire in June for tweeting: "We do not have a policy of separating families at the border. Period.”