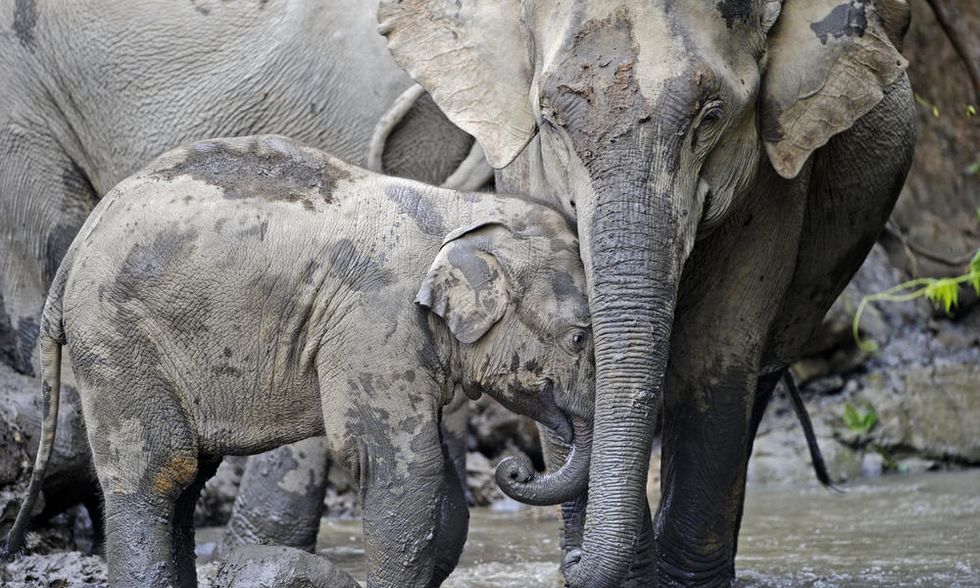 The 1,200 or so wild elephants remaining in Myanmar, on the border of China, are in danger. They are being ruthlessly poached, but not for their ivory tusks. Many of these elusive elephants don’t even have tusks. Instead, they are being hunted and killed for their skin.

The extent of the problem was starkly revealed earlier this year when 25 dead elephants were found in the Ayeyawady delta in southwestern Myanmar. Prior to this incident, experts believe that the killing of elephants for their skin was rare.

The poachers who killed the 25 elephants appear to have been surprised, leaving behind the skins. “They hung off the skin like laundry. Some bags were confiscated with raw hides still rolled up on pieces of wood and severed elephant trunks,” said Aung Myo Chit, the Smithsonian Institution’s Myanmar county coordinator. The elephants appeared to have been killed with poison darts, causing the elephants to die a slow and painful death.

Nilanga Jayasinghe, a senior program officer for Asian species with the World Wildlife Fund, called the elephant massacre “an alarm call,” signaling a growing trend in poaching skins in Myanmar and neighboring nations. At least six other elephants were found skinned in nearby regions. “This could spread very quickly,” warned Jayasinghe.

Klaus Reisinger, a filmmaker who works with Chit, believes the true number of elephants slaughtered to be much higher. “Whenever one dead elephant is reported, it means there are three more. The scale is unprecedented—I’ve never seen anything like it. We filmed a herd of 50 in the Ayeyawady region. Now they’re gone.”

Jayasinghe warns that if the elephant skin trade spreads, the results will be “devastating”—in particular because, unlike with ivory poachers, the female elephants will also be targets. (Only male elephants have tusks.) The polygamous elephants can survive with fewer males as long as the females are left alone. But if the females become targets, “that’s the surest way to drive a species to extinction very rapidly,” said Peter Leimgruber, a Smithsonian biologist.

The use of elephant skin for medicine in tribal areas is not new. It has been used in traditional medicines for eczema and various stomach ailments for some time. However, the use of skins for jewelry is. Traders cut small blocks of dried skin, run them through bead-cutting machines, and polish them. When polished, they look like a red amber.

The Bago Yoma forests, home to many Myanmar elephants that are in danger of being poached for their skin, has opene… https://t.co/VWfgaJdkv6
— Visit Myanmar (@Visit Myanmar) 1513309337.0

The redder the beads, the more desirable. Even poor-quality bead necklaces are selling for more than $100.  Raw elephant skin is selling for $29 a pound—up ten-fold from a decade ago. All told, the skin of one elephant can fetch about $30,000.

“That’s the worrying thing,” said Christy Williams, country director of the World Wildlife Fund’s Myanmar office. “When these things take off, they take off quickly.”