Someone Photoshopped Trump at His Golf Club's Breakfast Bar Onto the Photo of Obama's War Room During the bin Laden Raid, and People Are Disturbed 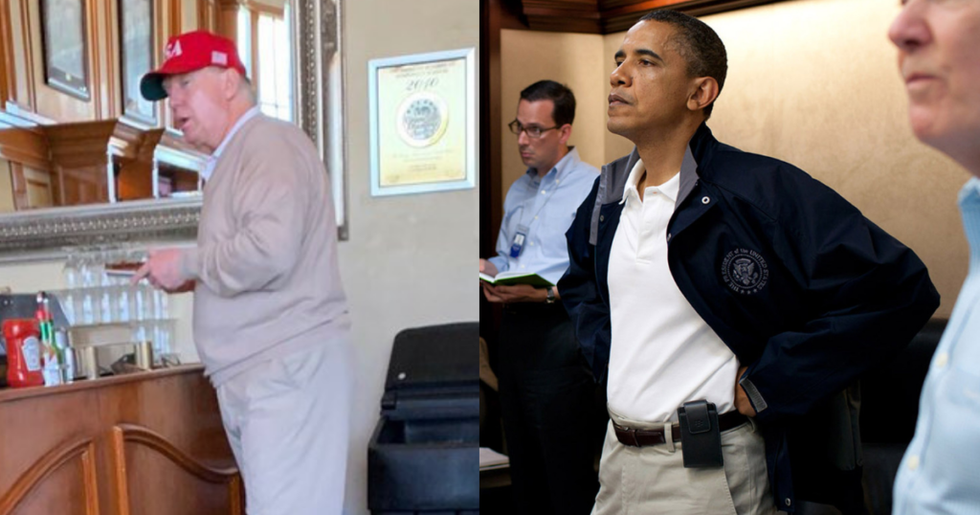 May 2, 2011: President Barack Obama and his national security team watch anxiously as Seal Team Six successfully storms a compound in Pakistan where Osama bin Laden, wanted for orchestrating the 9-11 attacks, is hiding.

After nearly a decade of hunting and angst, the Saudi billionaire terrorist is killed. The nightmare is over.

February 15, 2019: President Donald Trump declares a national emergency to reallocate government funds for a border wall that he promised Mexico would finance. Afterward, Trump traveled to Florida where he waited at an omelet bar at the Trump International Golf Club in West Palm Beach.

Experts and insiders agree there is no emergency at the southern border, and unlike Obama, Trump routinely rejects the findings of his intelligence officials.

So when one Twitter hero, @WardQNormal, decided to Photoshop the two images of the 44th and 45th presidents responding their respective crises, it was a study in contrasts for the ages.

The creator's husband is proud, as he should be.

If you missed it, my husband @WardQNormal is an evil Photoshopping genius. https://t.co/lfGI3nISWR
— Steve Silberman (@Steve Silberman) 1550430514.0

People were so here for it.

One person made a fantastic revision.

Look closely at Trump... and who is next to him.

How did we get here?

@nikbroduff @jentaub This is brilliant I even know the image, if memory serves me correctly is from the Bin laden operation
— GlynisMJenkins (@GlynisMJenkins) 1550510494.0

Also, take note of Trump's outfit; remember when Republicans assailed Obama for wearing a tan suit? Imagine if he had whisked himself away to play golf after trying to bypass Congress and its power to spend money while wearing beige.