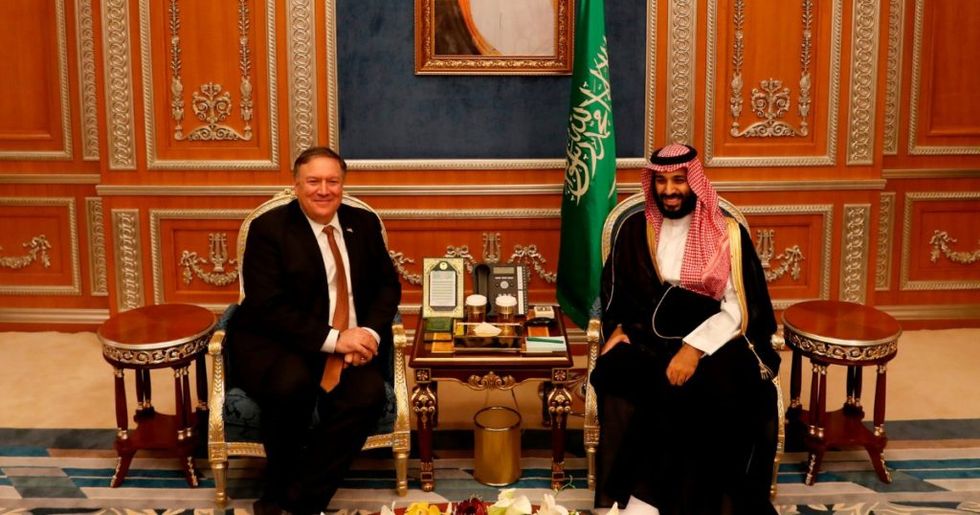 US Secretary of State Mike Pompeo (L) meets with Saudi Crown Prince Mohammed bin Salman in Riyadh, on October 16, 2018. - Pompeo held talks with Saudi King Salman seeking answers about the disappearance of journalist Jamal Khashoggi, amid US media reports the kingdom may be mulling an admission he died during a botched interrogation. (Photo by LEAH MILLIS/AFP/Getty Images)

Pompeo traveled to Riyadh at the behest of President Donald Trump to get answers on Khashoggi's death as Trump tries to salvage a $110 billion arms deal with the Saudis.

The United States and Saudi Arabia are "strong and old allies. We face our challenges together -- the past, the day of tomorrow," MBS told reporters after meeting with Pompeo.

But the smiley, jovial images coming out of the meeting are sending a message that one man's life is less valuable than the sale of weapons to a country known for its funding of terrorist activity.

Republican strategist and vocal Trump critic Ana Navarro tweeted that the Saudis "just chopped-up a journalist who was a US Permanent Resident. He lived in the US. He worked at a US company. What in the hell is there to smile about? Disgusting."

Activist Leah McElrath had a much harsher take on the photo-op.

"Pompeo met with MBS in Saudi Arabia today. This photo op was a choice," she tweeted. "A choice that sends a signal to the world: 'Assassinate perceived dissidents with impunity. This administration will smile by your side.'"

Washington Post columnist Jennifer Rubin, a colleague of Khashoggi, said that the "suckuppery" to Saudi Arabia was "nauseating."

Trump has boasted that the sale of weapons to Saudi Arabia would create hundreds of thousands of American jobs and that it's better for the world if the Saudis purchase American-made weapons of war, rather than those of China or Russia.

This is fueling a firestorm of dissent on social media.

@ananavarro @SecPompeo Same disgusting smile as when they were locking up children in cages, voting in a sexual ass… https://t.co/B9Vx8Mqgdv
— Heather Garrison (@Heather Garrison) 1539696154.0

Business as usual is not sitting well with the viewing public.

@ananavarro @SecPompeo Normalising murder to protect big businesses in arms sales not to mention his boss who is in hock to MBS et al.
— MAC (@MAC) 1539694659.0

@leahmcelrath Absolutely disgusting!! Is he still going to Turkey after this to help with the coverup story? Ther… https://t.co/9241NdsAEb
— Bruce MacDonald (@Bruce MacDonald) 1539694799.0

@leahmcelrath Pompeo works for a man who routinely insists that journalists are the enemy of the people. Trump _wis… https://t.co/fY8uC545B7
— Stan Trujillo (@Stan Trujillo) 1539696157.0

The optics for the United States have been far from stellar.

Trump has suggested without evidence that "rogue killers" could be responsible for Khashoggi's death despite audio and video recordings of the murder claimed to be in possession of Turkish officials and an evolving cover story being pushed by the Saudis.

The Saudi government is reportedly preparing to announce that Khashoggi, who was interrogated, tortured and murdered in the Saudi Consulate in Istanbul October 2, was killed by accident during a botched interrogation.

"Two sources close to the kingdom confirmed to CBS News later on Monday that the Saudi government was planning to admit he was killed, but call it an accident," Tucker Reals reported on Tuesday.

It won't be so easy, however, to write off the 15 Saudi operatives lying in wait inside the Saudi Consulate for Khashoggi's arrival with a bone saw in hand as an accident.

Following his meeting with MBS and other high-ranking Saudi officials, Pompeo "thanked the King for Saudi Arabia's strong partnership with the United States," and for "his commitment to supporting a thorough, transparent, and timely investigation of Jamal Khashoggi's disappearance."