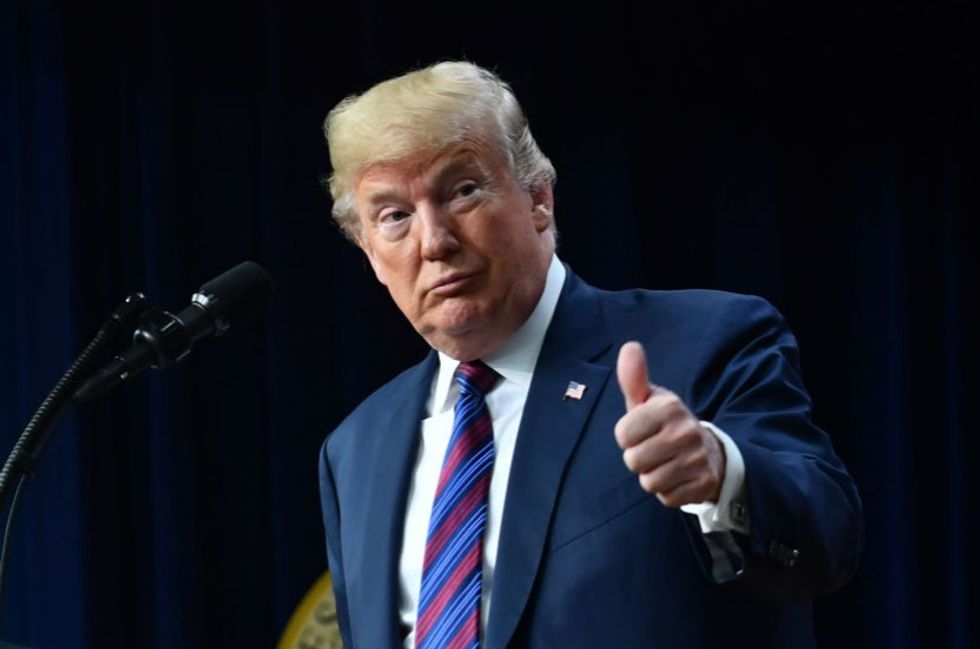 US President Donald Trump at the White House in Washington, DC, on May 30, 2018. (Photo by NICHOLAS KAMM/AFP/Getty Images)

Sports is a major part of life in the United States. Our athletic heroes are so important they're invited to the home of the head of the United States government after major accomplishments.

And few sports are bigger, or more American, than football. From peewee leagues of kids barely big enough to hold the ball to the professional players of the National Football League (NFL), football is intertwined with American life.

So it goes without saying that the winner of the Super Bowl, the most important game in all of football each year, gets an invitation to the White House to meet with the president. Until now.

President Donald Trump invited this year's Super Bowl winners, the Philadelphia Eagles, to the White House to meet him and recognize their victory. But Trump revoked that invitation less than 24 hours before the team was set to arrive. According to the official White House statement:

The Philadelphia Eagles are unable to come to the White House with their full team to be celebrated tomorrow. They disagree with their President because he insists that they proudly stand for the National Anthem, hand on heart, in honor of the great men and women of our military and the people of our country."

The Eagles wanted to send a smaller delegation, but the 1,000 fans planning to attend the event deserve better. These fans are still invited to the White House to be part of a different type of ceremony — one that will honor our great country, pay tribute to the heroes who fight to protect it, and loudly and proudly play the National Anthem. I will be there at 3:00 p.m. with the United States Marine Band and the United States Army Chorus to celebrate America."

So instead of recognizing the winners of the Super Bowl, the president will host a celebration of himself and a display of his idea of patriotism. That didn't sit well with fans of both football and the city of Philadelphia, especially when Trump's anthem claim is false.

Jim Kenney, the mayor of Philadelphia, was particularly pointed in his response.

There's no one more disrespectful to this country than the President...the guy talks about being patriotic, he avoided the draft five times in Vietnam."

In a statement of his own, Kenney responded to Trump's claim of the patriotic higher ground, pointing out that the city of Philadelphia holds a unique place in the history of the United States. He called the president's last minute disinviting of the team proof Trump is not a true patriot.

Kenney's statement is one of many responses from Pennsylvania politicians.

The mayor's Chief of Staff, Jane Slusser, also pointed out that the Philadelphia Eagles had no issues drawing a crowd, unlike Trump during his inauguration.

Pennsylvania Senator Bob Casey referred to Trump's retooled celebration as a political stunt and invited the Eagles to visit congress.

Representative Brendan Boyle, who represents Philadelphia, had some harsh words for the president as well in an interview with NBC News.

You even make a championship team visiting the White House all about you. What is wrong with you? Seriously, what condition do you have?"

Boyle also invited the Eagles to come visit him at the capitol building.

The Attorney General of Pennsylvania, Josh Shapiro, extended his own invitation as well. He got in a jab at Trump by stating the players would be free to discuss any issues on their minds when meeting with him.

We'll find out at 3:00pm if football fans hoping to see the Philadelphia Eagles show up for that "better" display they deserve with just President Trump. This could prove to be an embarrassing afternoon.