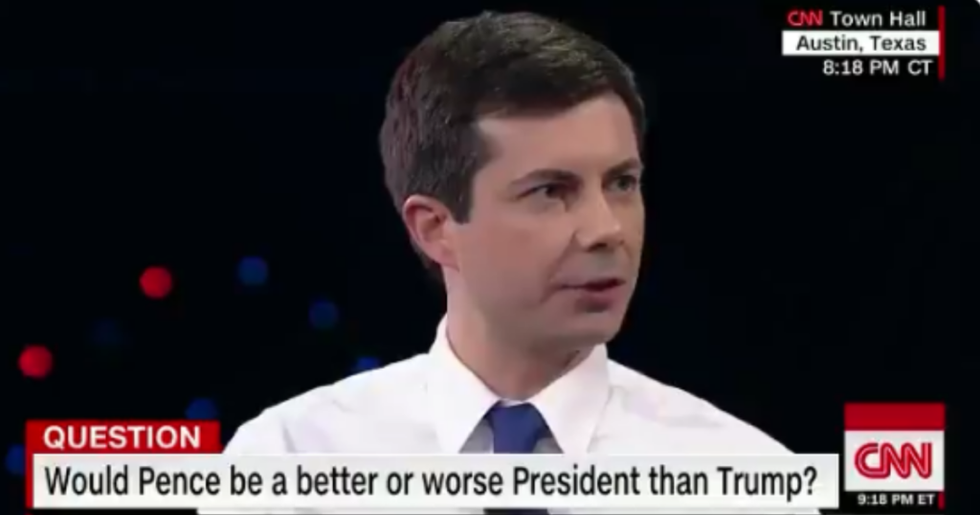 Buttigieg, the openly gay mayor of South Bend, Indiana and the only millennial seeking the nation's highest office, told Jake Tapper that he used to think Pence "believed in our institutions and was not personally corrupt."

But this changed when Pence decided to join Trump's presidential ticket, becoming one of Trump's most faithful footsoldiers.

Buttigieg contrasted his own beliefs with Pence's fundamentalist "interpretation of scripture," the basis of Pence's opposition to topics like gay rights and pre/extramarital sex:

"My understanding of scripture is that it is about protecting the stranger, and the prisoner, and the poor person... has a lot more to do with sexuality and a certain degree of rectitude."

What a perfect dig at Pence.

Buttigieg may not yet be a household name, but his town hall on Sunday certainly made a splash.

People are taking him seriously as a presidential contender.

@kylegriffin1 @rkrosalyn31 Pete Buttigieg has surprised me. I get good vibes from this man, he’s thoughtful, articu… https://t.co/xInylu9qUb
— RiverCate (@RiverCate) 1552306602.0

@kylegriffin1 I would love nothing more than for a smart person to be president. I don't think he has a great chanc… https://t.co/jmZA2X1sRw
— Erik Halverson (@Erik Halverson) 1552278554.0

Could Buttigieg be a dark horse candidate?

Buttigieg's shade mirrors a piece in The Atlantic from last year in which the vice president is taken to task for his religious hypocrisy.

"No many can serve two masters, the Bible teaches, but Mike Pence is giving it his all," wrote McKay Coppins. "In Pence, Trump has found an obedient deputy whose willingness to suffer indignity and humiliation at the pleasure of the president appears boundless."