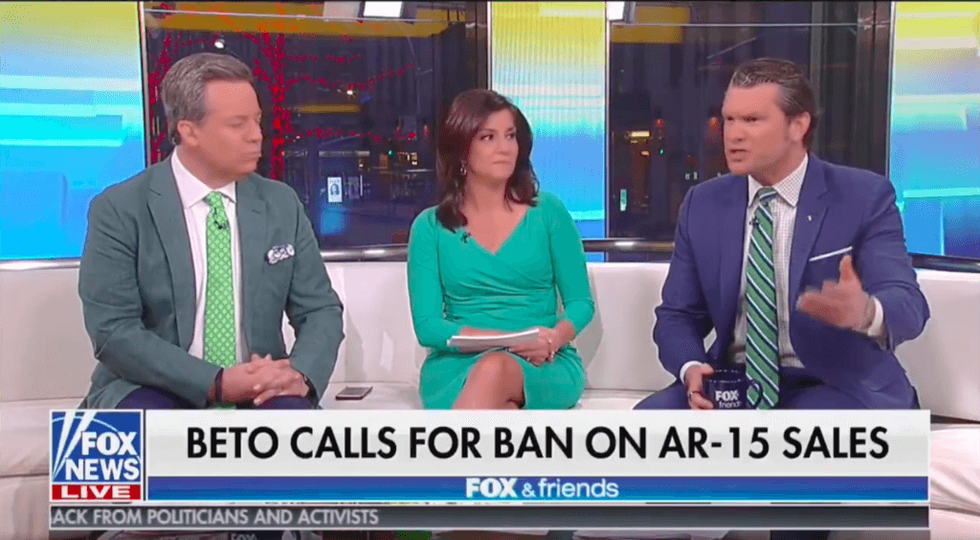 “Now if you own an AR-15, keep it. Continue to use it responsibly and safely. I just don’t think that we need to sell any more weapons of war into this public,” O'Rourke said in remarks that are not at all dissimilar to what he's claimed since his race for Senate in 2018.

“Such easy, loose rhetoric of the left,” Hegseth said. "If I own an AR-15, stocks of gun companies probably will go up after things like this. Responsible gun owners recognize their right to own rifles like that. You can use 'weapons of war' or 'assault ban' all you want."

"This will appeal to his base: young people who are uninformed about the difference between an automatic and semiautomatic rifle. But go out and get your second AR-15 today. Maybe it's a good reason to do so."

What responsibility will this yahoo host Pete Hegseth have if a deranged indiividual acts on his suggestion of buyi… https://t.co/DEo3KZieWd
— #Stand4HumanRights (@#Stand4HumanRights) 1552888248.0

@PeteHegseth Because someone suggests ordinary folks don't need weapons of war, you suggest to your viewers to buy… https://t.co/gFx9cAWJtx
— Vip Malixi (@Vip Malixi) 1552872778.0

@PeteHegseth Shame on you !As a southerner, whose family comes from a long line of fun collectors and NRA lifetime… https://t.co/xLfWrkMBQL
— Gina Alday Wooten (@Gina Alday Wooten) 1552893413.0

According to a study conducted by researchers at Brigham and Women’s Hospital (BWH) that analyzed around 200 active shooting incidents in America, active shooters who use semi-automatic rifles will double their chances of wounding and killing victims, in comparison to another type of gun.

O’Rourke claimed that the AR-15 was “designed, engineered and sold to the United States military for the express purpose of killing people as effectively as possible, in as greater number as possible.”

He added that an AR-15 would “blow a hole in your back the size of an orange" due to "high-impact" and "high-velocity" rounds. He noted that a wounded individual would "bleed to death” before anyone can get to them “because that is exactly what it was designed to do.”

“As a cabinet, we were absolutely unified and very clear. The terrorist attack in Christchurch on Friday was the worst act of terrorism on our shores,” Ardern said. “It has exposed a range of weaknesses in New Zealand’s gun laws. The clear lesson from history around the world is that, to make our community safe, the time to act is now.”

“Within 10 days of this horrific act of terrorism, we will have announced reforms which will, I believe, make our community safer,” she added.

The death toll in the mosque shootings exceeds New Zealand's annual homicide rate. There were 35 homicides in New Zealand in 2017, the last year for which figures are available.