Donald Trump Just Got $1 Billion Toward His Border Wall From the Pentagon, and Democrats Are Crying Foul 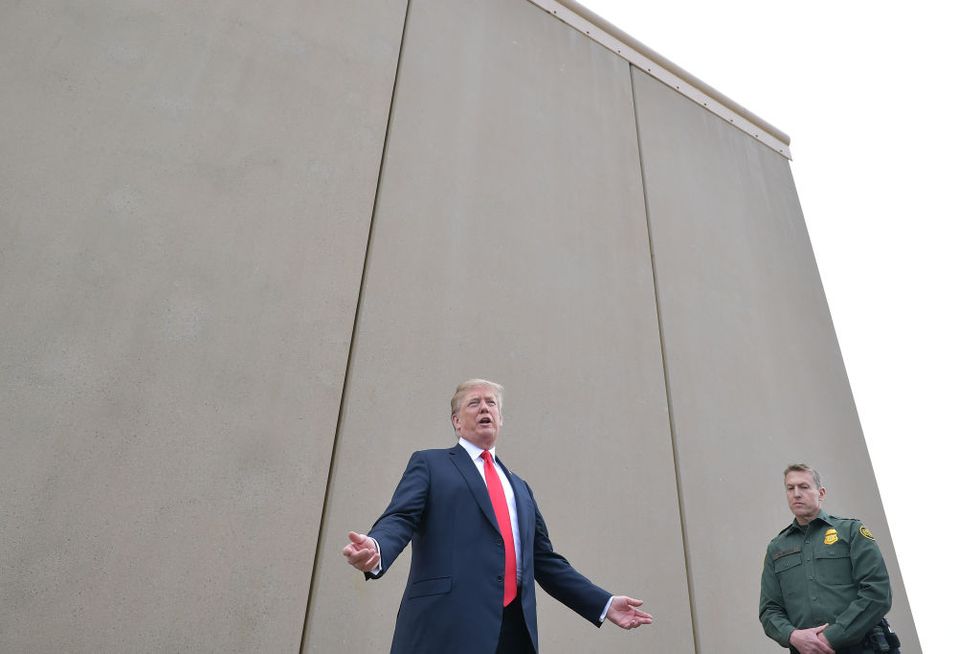 The memo noted that the Department of Defense authorized the Army Corp of Engineers to begin planning and construction on 57 miles of fencing along the southern border, as well as improving roads in Yuma, Arizona, and El Paso, Texas.

The $1 billion in funding would help “block drug-smuggling corridors across international boundaries of the United States in support of counter-narcotic activities of Federal law enforcement agencies,” the Pentagon said.

The Pentagon cites its legal authority "to construct roads and fences and to install lighting to block drug-smuggli… https://t.co/m8hfd5wYYX
— Vera Bergengruen (@Vera Bergengruen) 1553567071.0

Democratic senators led by Patrick Leahy (VT) and Richard Durbin (IL) condemned the move in a letter addressed to Shanahan.

“We strongly object to both the substance of the funding transfer, and to the Department implementing the transfer without seeking the approval of the congressional defense committees and in violation of provisions in the defense appropriation itself,” the senators wrote. “As a result, we have serious concerns that the Department has allowed political interference and pet projects to come ahead of many near-term, critical readiness issues facing our military.”

"The 1 billion programming that the Department is implementing without Congressional approval constitutes a dollar-for-dollar theft from other readiness needs of our Armed Forces. As you are aware, each year, the military Services request billions in mid-year transfers to address unexpected shortfalls in paying for our troops, providing, training, maintaining their equipment, and accelerating new technologies."

The rejection, however, doesn't amount to much, as the Pentagon is permitted to continue the transfer as it sees fit.

Others also criticized the move.

To pull the Army Corps of Engineers off crucial projects that benefit troops, their families and our communities, t… https://t.co/tuOXOyagwy
— VoteVets (@VoteVets) 1553576091.0

The Pentagon's move comes a week after it disclosed the list of projects President Trump wants to divert funding from to pay for his proposed border wall along the U.S.-Mexico border. According to the list, which the Defense Department provided to Congress on March 18, the military would take the biggest hits, with dozens, possibly hundreds, of military construction projects at risk of delay or cancellation as a result of the national emergency the president declared last month.

Speaking to CNN, Lieutenant Colonel Joe Buccino, a spokesman for the Pentagon, said should acting Secretary of Defense Patrick Shanahan “determine that construction along the southwest border is necessary to aid the mission of military personnel supporting the Department of Homeland Security, some projects within this pool may be used to fund up to $3.6B in barrier construction.”

The list includes projects valued at $12.9 billion that are “unobligated.” This means that construction projects have yet to be awarded. Among the projects at risk of being slashed are $41 million for repairs to a heating system at Eielson Air Force Base outside Fairbanks, Alaska, and $17 million for a crash rescue station at Tyndall Air Force Base in Panama City, Florida. The Pentagon has provided minimal guidance as to which of these projects would be cut, however.

President Trump declared a national emergency last month, a move which allows him to access billions of dollars to construct a wall at the U.S.-Mexico border after Congress denied his requests for funding.

Multiple lawsuits have been filed in an effort to halt the president’s national emergency declaration. Last week, Congress passed a bipartisan measure blocking the declaration, but Trump vetoed the measure on March 15. It was the first veto of his presidency. Although the Democrat-led House is scheduled to vote today on overriding the president's veto, their efforts are not expected to succeed. Only 13 Republicans sided with Democrats during the original vote, which left the veto intact.