A Republican State Lawmaker Asked Christ For Forgiveness Before a Muslim Democrat Was Sworn Into Office, and People Are Not OK 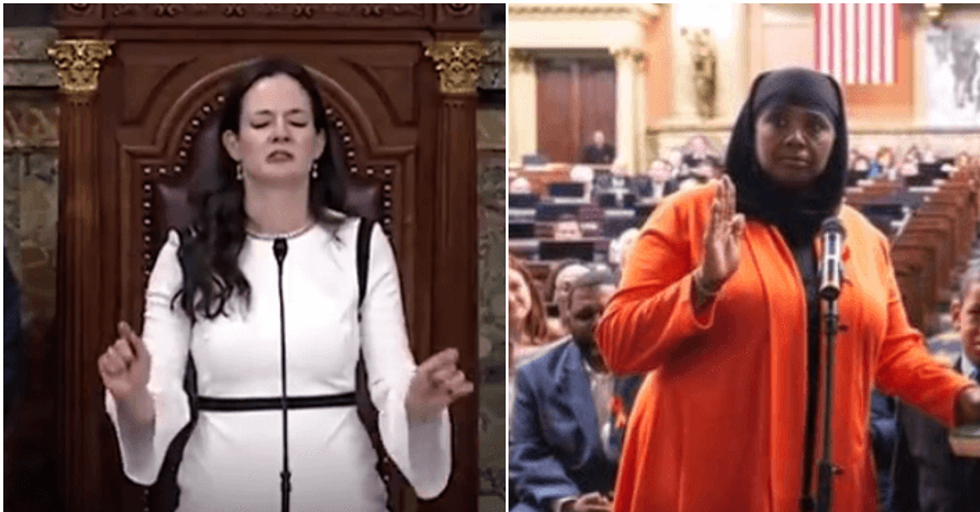 Republican Representative Stephanie Borowicz of the Pennsylvania state legislature addressed her colleagues from the podium shortly before the swearing in of Democratic Representative Movita Johnson-Harrell. Borowicz was to deliver the invocation.

Johnson-Harrell is Muslim and was to become the first Muslim woman in the Pennsylvania House once sworn in.

Why does her religion matter?

Borowicz stated before the state legislature:

"God forgive us—Jesus—we’ve lost sight of you, we’ve forgotten you, God, in our country, and we’re asking you to forgive us."

Borowicz ended her address with:

"I claim all these things in the powerful, mighty name of Jesus, the one who, at the name of Jesus, every knee will bow, and every tongue will confess, Jesus, that you are Lord, in Jesus’ name."

Jesus was uttered 13 times, Lord and God six times each during her less than 1.5 minute remarks before the legislature. She also mentioned President Donald Trump and Israel.

Observers stated other House members appeared visibly uncomfortable as Borowicz spoke. At least one person shouted an objection, prompting her fellow Republican, House Speaker Mike Turzai, to prompt her to wrap up her remarks.

"It blatantly represented the Islamophobia that exists among some leaders—leaders that are supposed to represent the people."

"I came to the Capitol to help build bipartisanship and collaborations regardless of race or religion to enhance the quality of life for everyone in the Commonwealth."

After the invocation, the Republican members of the House walked out, skipping the swearing in ceremony.

Representative Jordan Harris, the Democratic Minority Whip, condemned his colleague's remarks as an attempt to "weaponize religion." Harris called Borowicz's address before the legislature "deeply disrespectful" and "meant to intimidate" Johnson-Harrell and her family.

People agreed fully with Harris' take on the incident.

At a minimum, most people found the remarks insensitive.

While some concurred that the choice of words was deliberately Islamaphobic as well as targeting Jews, atheists and other non-Christians.

My state's majority in the House of Representatives just prayed to Jesus to thank Trump for his support for Israel… https://t.co/D6YIbIaFx5
— 𝓜𝓪𝓽𝓽 𝓡𝓾𝓫𝓲𝓷 (@𝓜𝓪𝓽𝓽 𝓡𝓾𝓫𝓲𝓷) 1553549159.0

I am disgusted by any and every Jewish institution that remains silent about this. I am disgusted.
— 𝓜𝓪𝓽𝓽 𝓡𝓾𝓫𝓲𝓷 (@𝓜𝓪𝓽𝓽 𝓡𝓾𝓫𝓲𝓷) 1553549161.0

The only choice for the Jewish community is to seek our safety through solidarity with all oppressed peoples.
— 𝓜𝓪𝓽𝓽 𝓡𝓾𝓫𝓲𝓷 (@𝓜𝓪𝓽𝓽 𝓡𝓾𝓫𝓲𝓷) 1553549161.0

Pennsylvania suffered an anti-Semitic hate crime in October when a gunman murdered 11 people at the Tree of Life synagogue. The shooter identified as a White nationalist.