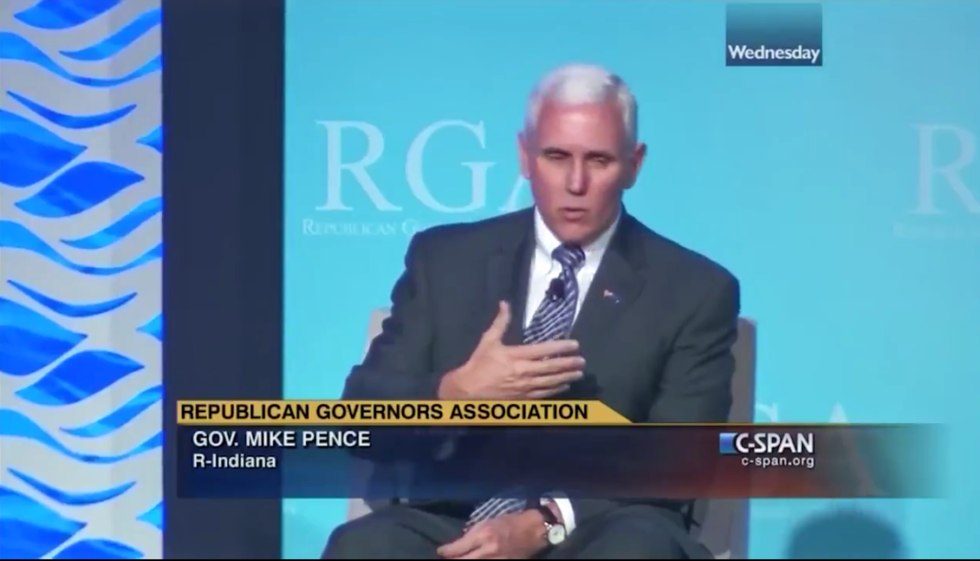 For the latest "Always a Tweet" Vice President's edition, C-SPAN footage of then Indiana Governor Mike Pence resurfaced on Twitter Thursday. Always a tweet refers to President Donald Trump or other members of the Trump administration condemning their own future actions in past Twitter posts.

For those who did not use Twitter as their primary form of communication for years—such as Vice President Pence—there is always a quote from videos and print interviews.

"I think it would be a profound mistake for the President of the United States to overturn American immigration law with the stroke of a pen."

"Issues of this magnitude should always be resolved with the consent of the governed. Signing an executive order, giving a speech, barnstorming around the country defending that executive order is not leadership."

People across the political spectrum call out the hypocrisy of Trump, his family members and administration. This time, conservative pundit Bill Kristol—Director of Defending Democracy Together and member of Rule of Law Republicans—called out Pence's support of Trump's national emergency ploy and continuous "barnstorming around the country" by sharing the C-SPAN video.

Watch an excerpt of Pence's remarks about Obama and executive orders at the Republican Governors Association November 2014 conference here.

@BillKristol Pence now has that bizarre look in his eye. In this video, his facial expressions seem normal, neut… https://t.co/C2NCP7ZC69
— ☇RiotWomenn☇ (@☇RiotWomenn☇) 1550197943.0

In each case of always a tweet, the President, his VP or members of his cabinet or staff strongly condemned an action by a Democratic leader or in most cases President Barack Obama. However they now endorse and embrace the same action when President Trump or a GOP leader does it.

Frequently, they condemned an exaggerated or false representation of the actions of Obama—like his vacation time, golf trips, executive orders or endless rallies—then endorse or ignore Trump doing what Obama was accused of. President Trump just held another Make America Great Again rally in El Paso, Texas to bolster support for his border wall.

The Republican Governors in attendance that year, many of whom stumped for or joined the Trump administration like Chris Christie and Rick Perry, denounced President Obama's plan to address the lack of promised immigration reform—after being mired in Congress for decades—with an executive order.

@BillKristol Pious Mike, The “voice of assured morality” who is for sale to the highest bidder
— fuqthegop (@fuqthegop) 1550196365.0

However Obama's executive order planned to address creating a path to legal citizenship for childhood arrivals, leading to the Delayed Action for Childhood Arrivals or DACA. It was not an attempt to pull appropriated funds set aside for specific purposes by Congress to another Obama pet project.

Trump intends to use a national emergency declaration—with no discernible emergency to support it—to divert 8 billion dollars to his border wall. But even a Republican controlled Congress refused to fund Trump's wall and the majority of voters in the United States have never supported the "most expensive and least effective" form of border security.

"I think it would be a profound mistake for the President of the United States to overturn American immigration law with the stroke of a pen."

He then added a comment about true leadership when he said:

"I would implore the President to reconsider this path and to demonstrate the kind of leadership that the American people long to see. And that this administration would sit down with this newly-minted Republican Congress and find genuine common ground on border security."

Pence continued his push for presidential cooperation with an opposing Congress when he said:

"There’s a series of piece by piece reforms that I believe that could be advanced in this Congress that would be in the longterm interest of the American people on this issue."

While no one knows what is said in private, Pence gives no such public admonitions about Trump's refusal to sit down with a newly minted Democratic House and negotiate border security and immigration law reforms.

From the outside looking in on the Trump administration, it appears something is only a bad thing if the other guy does it.