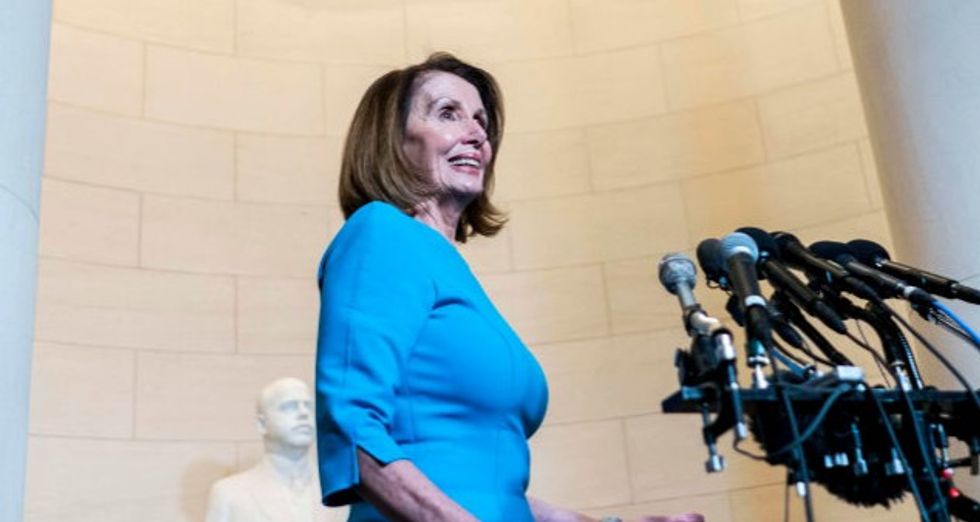 House Minority Leader Nancy Pelosi approaches the microphones to speak to journalists after her caucus announced that she has been nominated by the House Democrats to be the next Speaker of the House of the 116th Congress on Capitol Hill in Washington, DC on Wednesday November 28, 2018.(Photo by Melina Mara/The Washington Post via Getty Images)

As news of the Democratic Party regaining the majority in the House of Representatives spread, so did calls to replace the woman who lead the victory. But the criticism was not coming from new progressive first time winners in the House.

Backed all existing leadership... except for the woman at the top.

The discrepancy did not go unnoticed, especially after the group leading the charge released a letter signed by 14 men and two women. The House veterans on the letter were mainly comprised of members of the Blue Dog Coalition of conservatives within the Democratic Party.

But the double standard of House members unequivocally supporting male existing leadership while calling for Nancy Pelosi to step aside for "new blood" is not the only double standard at play. Nor the only one getting called on their appearance of sexism.

Media coverage has also been slanted. And The New York Times just got called out for it.

David Nir, political director at the Daily Kos posted The New York Times coverage for Paul Ryan's nomination to be Speaker versus their coverage of Nancy Pelosi's Wednesday nomination.

Nir was not the only one. And eventually The New York Times adjusted their headline and their intro for their article.

So what was the issue? Rachel Maddow broke it down on her show.

When Paul Ryan was nominated for the Speaker position by the GOP, he got fewer yes votes—200—and more no votes—43. But The New York Times touted Ryan as he "won overwhelming support of his colleagues."

Meanwhile, Pelosi's 203 to 32 vote was couched in a disclaimer that she fell well short of the votes needed to become House Speaker. So why such different coverage by The New York Times?

And it is not a red versus blue issue.

People wanted answers from The New York Times about their "media bias."

The final vote for Speaker of the House will take place in January when the 116th Congress convenes.