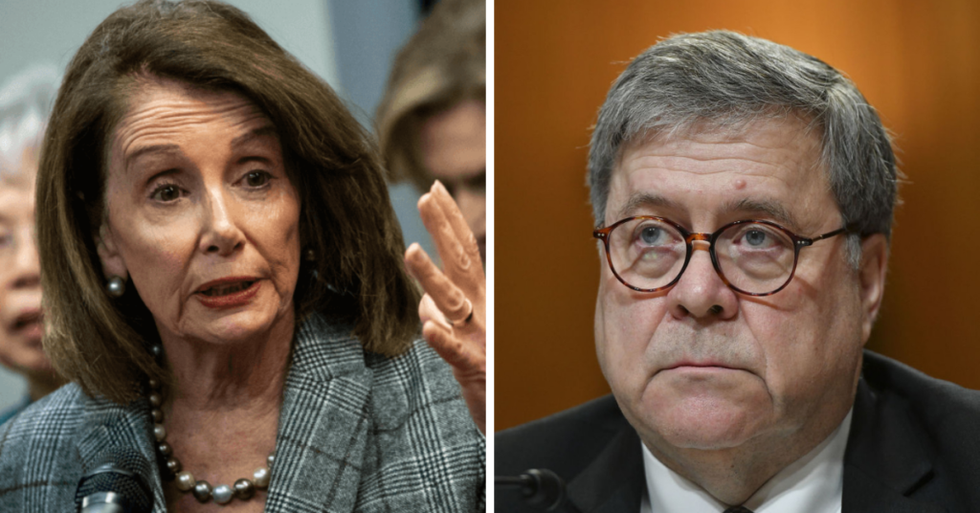 Attorney General William Barr had a rather awkward moment after he approached House Speaker Nancy Pelosi (D-CA) at a Memorial Day event outside the Capitol, shook her hand, and asked her, "Madam Speaker, did you bring your handcuffs?"

Barr's question came as Pelosi prepares to schedule the contempt vote against Barr before the full House. According to a bystander who spoke to NBC News, she smiled and gestured in the direction of the House sergeant-at-arms, who makes arrests should the House deem them necessary.

The two shared a laugh over the incident, but observers say it underscores inflamed tensions in Washington, a sign that the Trump administration is making a mockery of Congressional investigations as Democrats weigh impeaching President Donald Trump and continue their probes into Russian interference.

Barr did not attend the second day of his hearing before the Committee. His first appearance came less than 24 hours after it emerged that Mueller had pushed Barr twice to release more of his report’s investigative findings, saying Barr’s initial summary “did not fully capture the context, nature, and substance of this Office’s work and conclusions.” The news sparked outrage among Democrats who’ve accused Barr of misrepresenting the probe’s findings since March 24, when Barr released his summary.

Barr told the committee that Mueller was unhappy with the media coverage surrounding his report, saying that he and Mueller spoke by phone after Mueller submitted his letter. Barr says Mueller was “very clear with me that he was not suggesting that we had misrepresented his report.” These statements have increased public pressure for Democrats to call Mueller in to testify.

The hearing became embroiled in further controversy after Barr maintained that President Trump ordering his associates to lie to the special counsel did not meet the definition of obstruction of justice. Pelosi accused him of lying to Congress.