We feel her frustration. 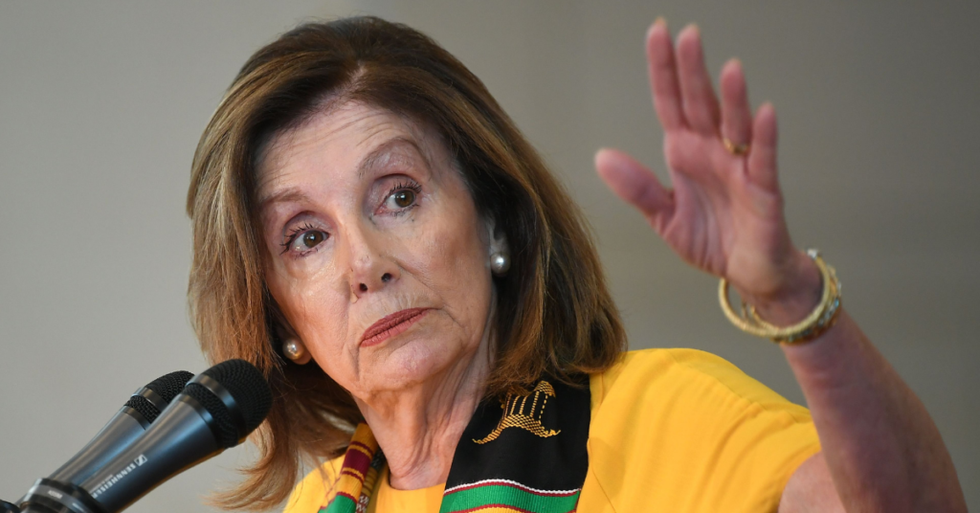 US Speaker of the House Nancy Pelosi speaks at the Congressional Black Caucus (CBC) ceremony to commemorate the 400th anniversary of the first recorded forced arrival of enslaved Africans in the Emancipation Hall of the US Capitol in Washington, DC on September 10, 2019. (Photo by Mandel Ngan/AFP/Getty Images)

The Speaker of the House, Democrat Nancy Pelosi of California, put credit where it was due when asked about the lack of gun control legislation passed through Congress.

When a reporter asked Pelosi if she had regrets about not calling the House back from recess early to tackle gun control in the wake of more mass shootings and acts of White nationalist domestic terrorism she put the reporter in her place reminding her that the House has in fact passed gun control legislation and that her question was better asked of Senate Majority Leader McConnell.

"Members [of Congress] had events all over the country [during the recess] to ask [the Senate] to bring up the bill. Don’t ask me what we haven’t done. We have done it."

"And if you are annoyed with my impatience, it’s because people are dying because Sen. McConnell hasn’t acted. Why don’t you go ask him if he has any regrets for all the people who died because he hasn’t?"

McConnell, of course, has claimed his failure to bring any legislation forward was not due to obstruction, as he has often bragged of in the past with President Barack Obama, but rather because he intends only to advance legislation that President Donald Trump will sign.

However, the Constitution is not designed to have the executive branch pre-approve legislation.

@frankthorp @costareports "all of this" being one domestic terrorist attack after another.
— Jay Robertson (@Jay Robertson) 1568141619.0

Under the US Constitution, the legislative branch creates legislation as they decide it is needed regardless of presidential approval. If the President refuses to sign it—vetoes it, Congress can override his veto.

McConnell's model of the Senate as a body which only considers or approves bills given the green light by Trump effectively puts Trump in charge of all legislation. McConnell's model destroys the checks and balances set forth in the Constitution between the legislative and executive branches.

With McConnell's obstruction of all court nominees by President Obama and his push to get all of Trump's picks approved, some would say McConnell also worked to destroy the balance with the judicial branch as well. The Kentucky Republican boasted of his ability to obstruct anything President Obama proposed, most famously the Supreme Court nomination of Merrick Garland.

People agreed with Pelosi's assessment of why the lack of effective gun control legislation rested solely with McConnell.

@minhtngo Nancy’s 💯correct these reporters are a pain in the ass asking all of these ridiculous dumb questions that… https://t.co/HLARi7Wwml
— Berman Patterson (@Berman Patterson) 1568211693.0

Trump and McConnell's ties to the National Rifle Association were also a bone of contention with many. In 2018, financial disclosures put NRA donations to McConnell's coffers at $1,261,874.

The top 75 recipients of NRA funds were all members of the GOP. The first Democrat on the list received only $49,496 compared to the millions given to Republicans.

The fact the GOP controls the Senate and refused to pass gun control was not lost on the public.

Think it's time to ditch Mitch? This shirt is available here.