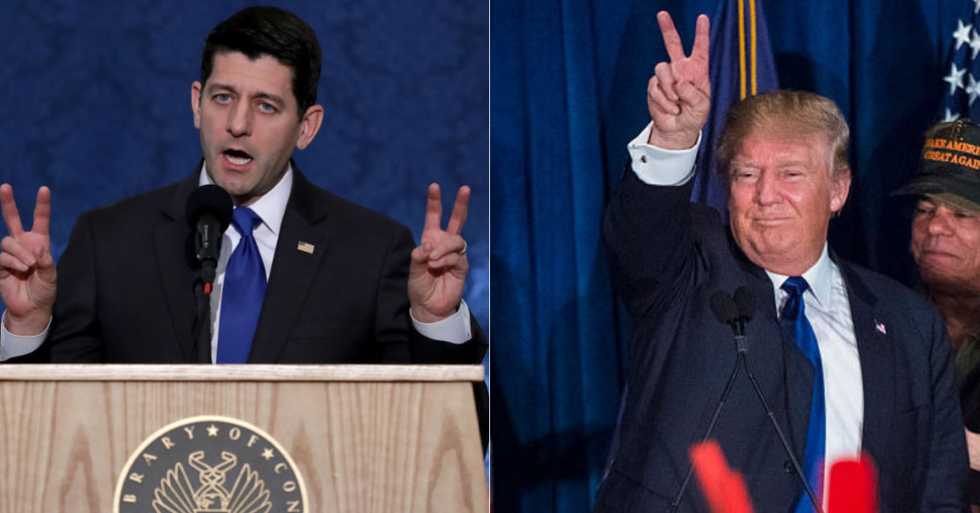 Paul Ryan, former Republican Representative from Wisconsin and former Speaker of the House, decided to retire from politics and not seek reelection in 2018. But that does not mean he will not step forward publicly, or step in it, as the case may be.

When Ryan recently decided to extol the virtues of President Donald Trump in an interview with PBS Newshour's Judy  Woodruff, his remarks got more backlash than backing.

"[Trump]’s not taking any crap. I mean, he’s taking on political correctness; he’s taking fights that a lot of people want to see fought."

"The forgotten man that he speaks to is a person that finally feels like they’re being taken seriously, they’re being paid attention to. And he’s concerned about their issues."

"That is the guttural core of what I would call the party base right now, the Trump base."

People had theories on who those forgotten men might be.

@washingtonpost Does he mean racists who’d been forgotten because they were hiding?
— Nic Harcourt (@Nic Harcourt) 1561434305.0

@washingtonpost Uh huh. The sociopaths of the nation. An underappreciated segment given Trump's adoration for them.
— karen munro (@karen munro) 1561410782.0

Some offered suggestions of people Ryan and Trump might have forgotten to remember.

While others felt Trump's base of "forgotten men" were hardly forgotten.

Trump's demographic is literally the one democraphic that is never, ever, ever forgotten in any election ever. Sho… https://t.co/noy7bslRld
— Matthew Chapman (@Matthew Chapman) 1561412716.0

@washingtonpost O come gather 'round, you male sufferers of reverse racism and the brain dead women who love them. 🙄
— In the Loop Lisa (@In the Loop Lisa) 1561414435.0

@washingtonpost How can we ever forget old, rich white men? I think about them and how they are controlling the pol… https://t.co/PF6bpZUQox
— Scott Bond (@Scott Bond) 1561412146.0

A few questioned if the interview was a joke.

People also questioned Ryan's motives for making such statements now that he is retired from politics.

And while Ryan failed to elaborate what issues unite Trump and the "forgotten man," people offered suggestions.

As for the "forgotten man" rhetoric that Ryan revived, President Richard Nixon used the same line in his presidential campaign. It is not intended to appeal to anyone new, but rather to speak to those core supporters, letting them know they are the real victims.

But hatred, fear and self-pity are strong motivators. Especially at the ballot box.

"C.K. Justice was born in Midwest America to hard working blue collar workers. After living with racism at his public school and several jobs, he finally found his calling and joined the military in 2008. Currently working as a military instructor in the West, CK enjoys working with soldiers and Marines every day. CK's goal is to share his knowledge and skills to help make the world a better place for his kids."

"For many people, the rise of white supremacy is a recent phenomenon, but for those who are deeply familiar with U.S. history, it is not new. Quite the contrary. In this new book, David R. Morse, details how the "whiteness" of America came about and how it has become more prevalent from time to time, beginning with the founding of Jamestown to the current administration of Donald Trump."