Paul Ryan Complained that Alexandria Ocasio-Cortez 'Didn't Listen to a Word He Said' When He Gave Her Advice, and Everyone's Making the Same Joke 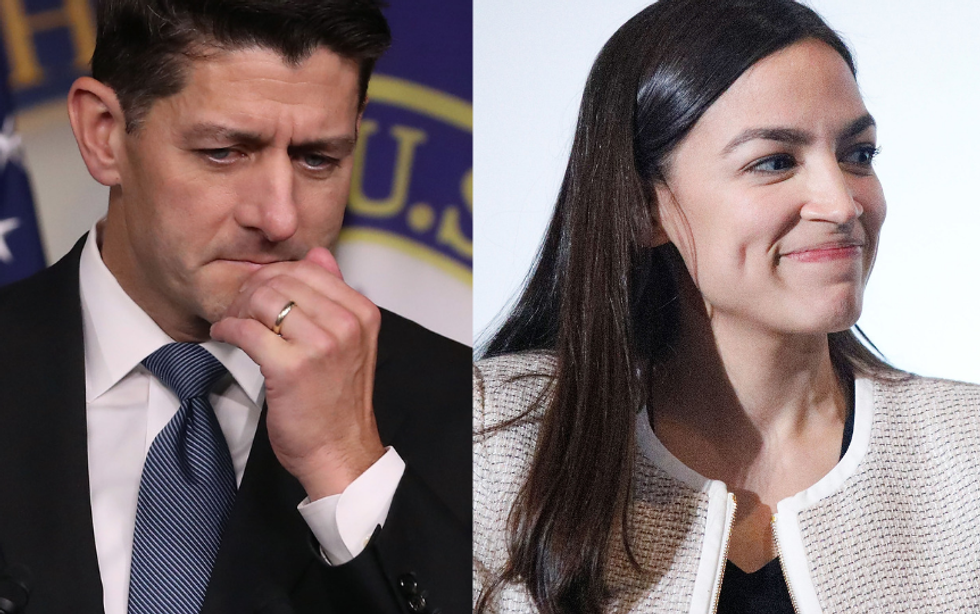 Poor Paul Ryan. The former Speaker of the House retired from politics this past January, with many saying good riddance.

The Republican and 2012 Vice Presidential nominee was deemed spineless by Democrats for frequently criticizing President Donald Trump's rhetoric while supporting his causes. Many on the right saw him as a Republican in name only. To top it off, the policies he championed left the economy worse for wear.

So it may not come as a surprise that when he tried to offer advice to freshman Congresswoman Alexandria Ocasio-Cortez (D-NY), she wasn't exactly eager to heed it.

"I don’t think she really listened to a thing I said," quipped Ryan at the annual Forward Janesville dinner in his hometown of Janesville, Wisconsin.

The wisdom Ryan was trying to impart? "Just take it easy, just watch things for a while."

As many have learned, that's simply not Ocasio-Cortez's style. To applause and detraction, the Congresswoman has sponsored one of the most controversial resolutions of the session so far, as well as proving to be extremely effective in committee hearings, much to Conservatives' chagrin.

The internet didn't blame her for ignoring Ryan's advice.

Paul Ryan spent 20 years in Congress, four of them as Speaker of the House. It's traditional for the outgoing Congress member to share tips with new arrivals. Alexandria Ocasio-Cortez, however, is more interested in progress than in tradition.

To be fair, Ryan's heart was in the right place: he was the second-youngest member of the House when he was elected, and AOC - "everybody calls her AOC," Ryan said - is the current youngest member.

"Just watch things for a while"? Nope. She definitely didn't take his advice.