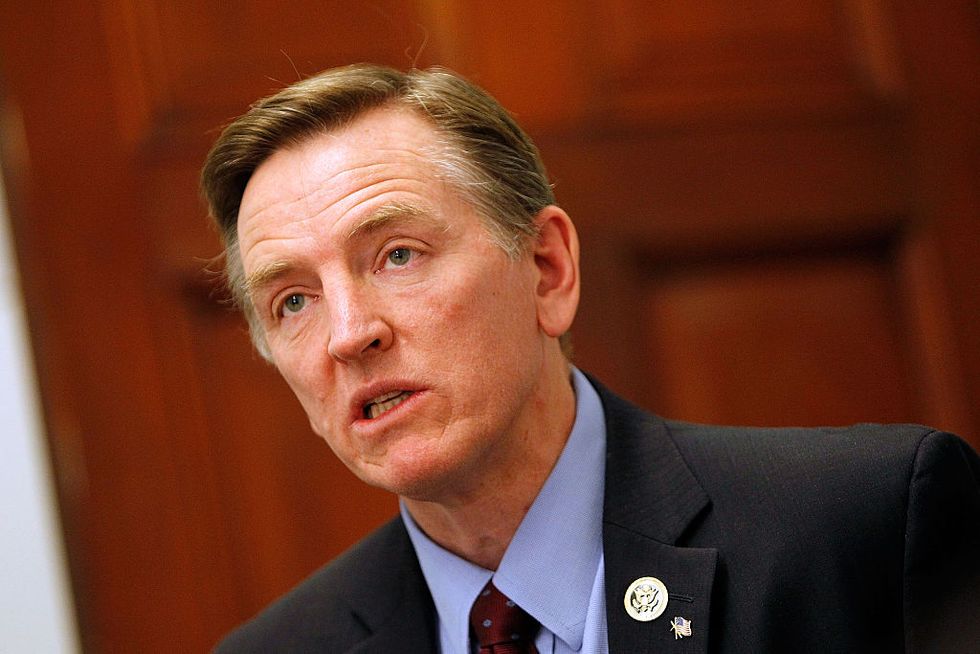 WASHINGTON, DC - JANUARY 07: Representative Paul Gosar (R-AZ) speaks at a news conference to discuss legislation to revoke comedian Bill CosbyÕs Presidental Medal Of Freedom at the Cannon House Office Building on January 7, 2016 in Washington DC. Cosby, who has been accused of sexual assault by more than 50 women, was awarded his Medal of Freedom in 2002 by President George W. Bush. (Photo by Paul Morigi/WireImage)

In a statement, Republican Representative Paul Gosar criticized Dr. David Brill, his Democratic opponent, for capitalizing on "family political differences" after his opponent launched a series of campaign ads featuring six of Gosar's siblings urging people not to vote for him in the upcoming midterm elections.

"Those of my siblings who chose to film ads against me are all liberal Democrats who hate President Trump," Gosar, an immigration hardliner who first won election in 2010 with the support of the Tea Party, told CNN in a statement. "These disgruntled Hillary suppporters [sic] are related by blood to me but like leftists everywhere, they put political ideology before family. Lenin, Mao and Kim Jung Un (sic) would be proud."

"You can't pick your family. We all have crazy aunts and relatives etc and my family is no different. I hope they find peace in their hearts and let go all the hate," Gosar continued. "To the six angry Democrat Gosars -- see you at Mom and Dad's house!"

Gosar expressed similar sentiments on social media, saying that "Stalin would be proud" of his siblings' political leanings.

My siblings who chose to film ads against me are all liberal Democrats who hate President Trump. These disgruntled… https://t.co/GllhhrhJh1
— Paul Gosar (@Paul Gosar) 1537640663.0

Gosar later shared a New York Times article which quoted Bernadette Gosar, the siblings’ 85-year-old mother, saying that she was "shocked" and "crushed" by the ads.

“I share the same philosophy and policies that Paul does,” she said. “He’s done a hell of a job for Arizona, and they love him.”

"I guess I really am Mom's favorite!" Gosar, the oldest of nine siblings, six of whom are Democrats, said.

Gosar's statements prompted many to fire back, criticizing him for supporting many of President Donald Trump's most harmful policies while acknowledging his familial rift.

@DrPaulGosar How awful do you have to be for your entire family to campaign against you? I guess we’ve found out.
— Reverend Hexar (@Reverend Hexar) 1537753494.0

@DrPaulGosar I think they like each other, they are just not fond of you and your politics. You are the odd man out… https://t.co/fUkgIsFNUd
— amyjojohannson (@amyjojohannson) 1537743420.0

@DrPaulGosar @JohnRiche Yeah. Crazy aunts, etc. But your own brothers and sisters? In public? Against you in a political campaign? 😂
— Peter F. Jackson (@Peter F. Jackson) 1537664671.0

This isn't the first time Gosar's siblings have spoken out against him so publicly. Seven brothers and sisters had previously written a letter to Arizona newspaper The Kingman Daily Miner criticizing Gosar after he claimed that the 2017 "Unite the Right" white nationalist rally in Charlottesville, Virginia, was backed by George Soros, a billionaire liberal donor whom many conspiracy theorists is in cahoots with Hillary Clinton to usurp the current world order.

"This is a matter of right and wrong, not politics.  We are aghast that Paul has sunk so low that he now spews the most despicable slander against an 87-year-old man without a shred of proof, and then doesn’t even have the guts or decency to apologize?" Joan, Dave, Tim, Grace, Gaston, Pete and Jennifer Gosar wrote at the time.

Our parents are 87 and 83 and we would be outraged if some sleaze did to them what Paul shamelessly did to Mr. Soros.  First, Paul confabulated horrendous lies about Soros as a young boy who survived the Holocaust, and followed it with invented notions that Soros was behind the Charlottesville Nazis.  Paul’s deceit was uttered without a shred of evidence.

Those aren’t our family values or the values of the small Wyoming town we grew up in. Character assassination wasn’t revered. Lies and distortions do reveal much about the character of the congressman of Arizona’s 4th congressional district, however.

David Gosar told the New York Times that the last time he personally spoke to his brother was when he decided to run for Congress and expressed his belief that then-President Barack Obama was born outside of the country. (President Trump and many of his supporters have embraced the "birther" conspiracy theory and Trump himself was perhaps its biggest propagator for years before he announced his candidacy for the 2016 election.)