Why Patagonia Says It Will Sue Trump over National Monuments 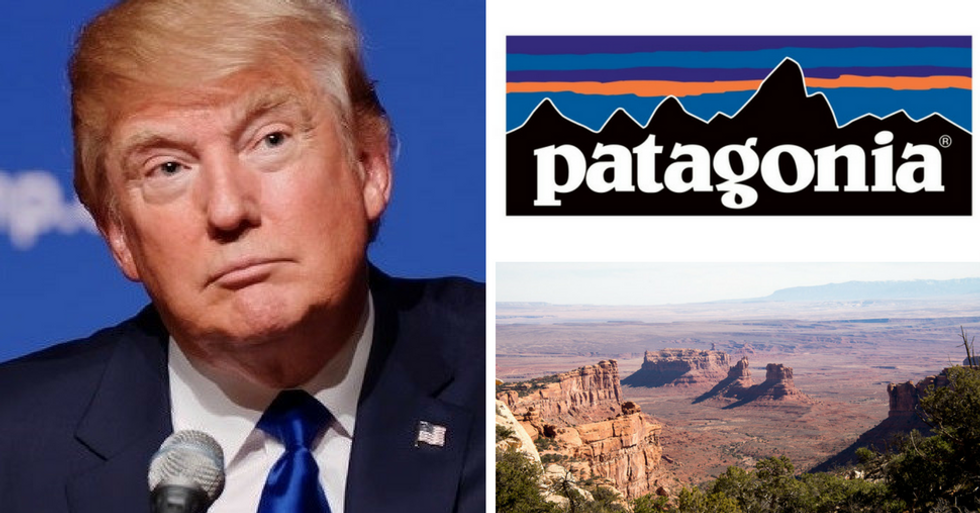 Patagonia slammed the president, saying that he lacks the authority to rescind designations made by his predecessors.

"A president does not have the authority to rescind a National Monument. An attempt to change the boundaries ignores the review process of cultural and historical characteristics and the public input,” Patagonia CEO Rose Marcario said in a statement. “We’re watching the Trump administration’s actions very closely and preparing to take every step necessary, including legal action, to defend our most treasured public landscapes from coast to coast.”

Trump framed his order as a way to return power back to the states and individuals. Referring to the Antiquities Act, the 1906 law which grants the president authority to designate national monuments and protect cultural, historic, or natural resources that come under threat, Trump said the statute "does not give the federal government unlimited power to lock up millions of acres of land and water, and it’s time that we ended this abusive practice."

“I’ve spoken with many state and local leaders, a number of them here today, who care very much about preserving our land and who are gravely concerned about this massive federal land grab,” Trump continued. “And now we’re going to free it up, which is what should have happened in the first place. . . . And tremendously positive things are going to happen on that incredible land, the likes of which there is nothing more beautiful anywhere in the world.”

Ryan Zinke, the Secretary of the Interior. (Credit: Source.)

"We take this as a sign that Trump and his team prefer to cater to fossil fuel interests and state land grabs for unsustainable development, rather than preserve a vital part of our nation's heritage for future generations by protecting federal lands owned by every citizen," the company's statement continued. "As stewards of America’s federal public lands, the Trump administration has an obligation to protect these most special wild places. Unfortunately, it seems clear they intend to do the opposite."

No presidentially designated monuments have been removed by later presidents under the Antiquities Act. While the statute does not explicitly bar presidents from altering a predecessor's designation, it does not say a president can reinstate a monument and appears to be one-directional.

In a statement, Theresa Pierno, president of the National Parks Conservation Association, said any attempt from the administration to undo or alter an existing monument “isn’t just undermining a century-old law, it’s a betrayal of the people who fought so hard for them and the land and history we’ve all spent generations safeguarding.”

Trump's executive order is part of a larger battle regarding the future of public lands.

After former President Barack Obama invoked the act to preserve both the Bears Ears area in southwest Utah, 1.35 million acres of the American West, and the Gold Butte National Monument, more than 300,000 acres in northern Nevada, House Republicans likened the move to a federal land grab, arguing that cutting the land off from development would damage the state economy. In January, the GOP voted to make it easier to sell off public lands, reevaluating the way the federal government calculates the cost of transferring those parcels to states or private developers. The change put 3.3 million acres of land up for auction.

“Allowing communities to actually manage and use these lands will generate not only state and local income tax, but also federal income tax revenues” House Natural Resources Committee spokeswoman Molly Block said in a statement at the time. She advocated for a reduction in federally supported payments, noting that “in many cases federal lands create a significant burden for the surrounding communities,” because they cannot be taxed and can be “in disrepair.”

Patagonia has long championed the protection of the environment. For example, in response to a Utah official's bid to revoke the designation of Bears Ears, Patagonia threatened to pull out of Salt Lake City’s biannual Outdoor Retailer Show, a trade show which brings $40 million in state revenue each year.

“We’re going to fight with everything that we have,” CEO Rose Marcario said at the time. “What we have is our economic power and the ability to withdraw from it if we need to.”

The retailer made national headlines in November after it generated a “record-breaking” $10 million in Black Friday sales––five times the amount it had initially projected––and promptly donated every cent of those profits to nonprofits focused on protecting and saving the environment.

According to Patagonia spokeswoman Corley Kenna, the idea for the fundraiser was the result of an internal brainstorming meeting following the outcome of the United States presidential election. The company, she said, decided to take action to showcase the importance of the environment and climate change. “We felt that these were issues that united us and I think this is a demonstration that people agree,” Kenna said. “Our customers agree.”