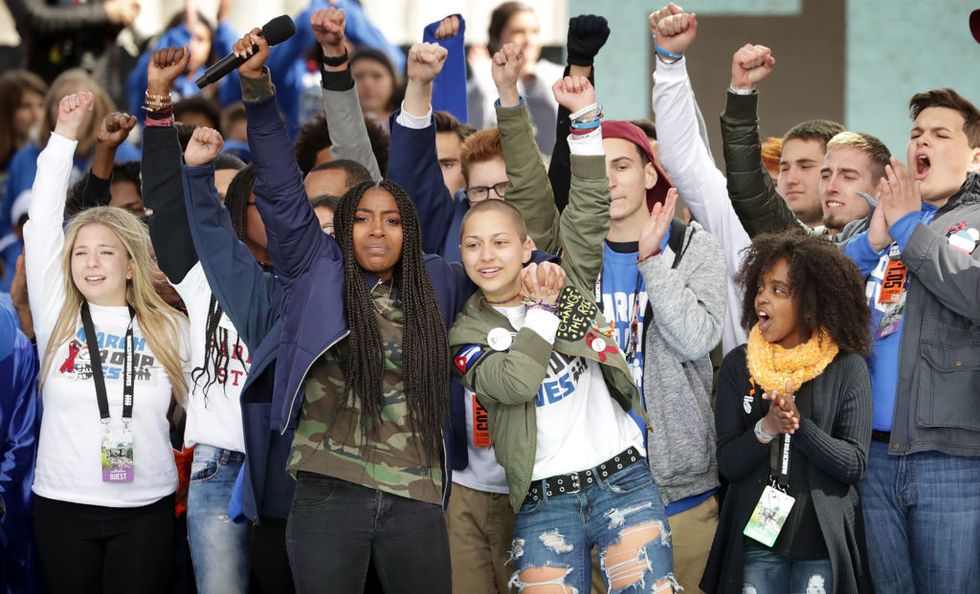 Students from Marjory Stoneman Douglas High School at the March for Our Lives rally on March 24, 2018 in Washington, DC. (Photo by Chip Somodevilla/Getty Images)

On March 21, Broward County School District announced changes to school policies at Marjory Stoneman Douglas High School in Parkland, Florida. Among those changes was requiring students to use only clear backpacks.

The move came as a security measure after the mass shooting that killed 17 people on February 14. The shooter was not a student at Stoneman Douglas.

Students immediately responded to the announcement with displeasure.

The Parkland students began spring break shortly after the announcement.  Many also attended March for Our Lives events on March 24.

This week they returned to school for the first time with their new requirements in place.

The students, who gained national attention for their organization of protests and calls for gun reform, were not silent about this change to their lives either.

Some merely commented on the change.

You know, I feel super safe now that the whole school can see my collection of tampons and pens.
— Delaney Tarr (@Delaney Tarr) 1522724820.0

Others went a more visual route.

Some took the opportunity to take Florida Republican Senator Marco Rubio to task.

Orange tags marked $1.05 refer to the money Rubio receives from the National Rifle Association (NRA) divided by the number of students in Florida. At the March for Our Lives, Stoneman Douglas junior Sarah Chadwick asked, “Is that all we’re worth to you?”

Students at Marjory Stoneman Douglas High School tag their new clear backpacks with $1.05 for the money Florida Senator Marco Rubio receives from the NRA divided by the number of students in Florida. (Twitter)

Others, including parents expressed general dissatisfaction with the new safety measure.

Student Cameron Kasky decided to show some solidarity with female students who expressed embarrassment over the contents of their backpacks being on public display.

In a Tweet he stated, "The students at MSD might have to take some steps in the wrong direction like those ineffective see-through backpacks, but let me make one thing clear-

We are too tough to go down. We won’t let the oppressive and corrupt people in power silence us. We will keep moving forward."

The students at MSD might have to take some steps in the wrong direction like those ineffective see-through backpac… https://t.co/PansSIlELf
— Cameron Kasky (@Cameron Kasky) 1522715948.0

The only positive about these backpacks is that maybe, hopefully, the stigma around periods will be removed. Also,… https://t.co/Me05GWJGgG
— Delaney Tarr (@Delaney Tarr) 1522759054.0

To those with questions about my tampon backpack- I only got lights. I didn’t know. Getting supers for tomorrow.… https://t.co/DskIHWbVfz
— Cameron Kasky (@Cameron Kasky) 1522758386.0

People outside of Parkland also weighed in.