Pardon Me? Trump Wonders How Far His Pardoning Power Extends 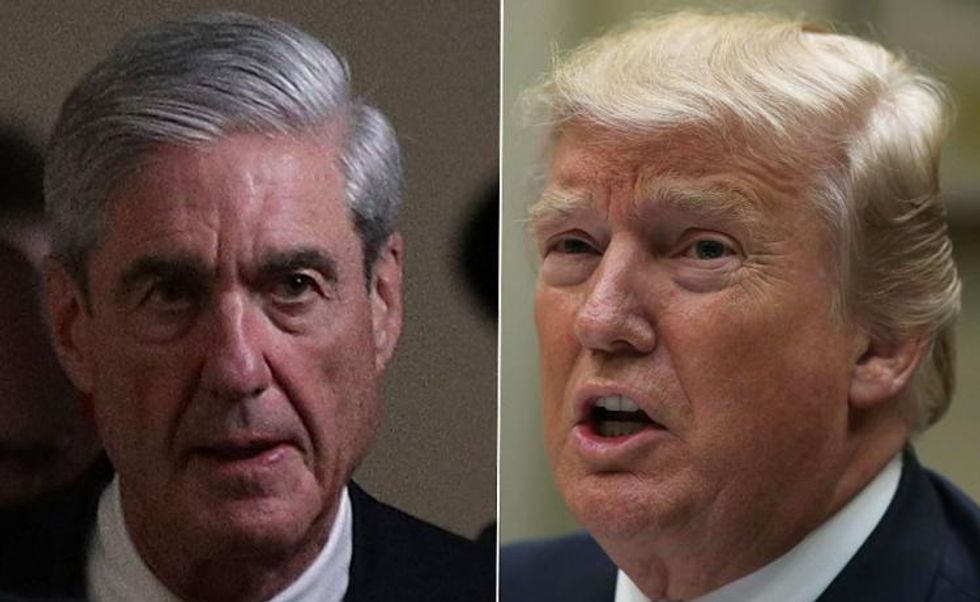 President Donald Trump reportedly has asked his legal team about his power to pardon his aides, his family, and even himself in an effort to undercut special counsel Robert Mueller's Russia probe, according to people familiar with his plans who spoke to reporters with The Washington Post. A second individual confirmed that Trump's lawyers have discussed the president's pardoning powers among themselves. The president has also pursued perceived conflicts of interest on Mueller’s team, which could potentially be cited by an attorney general and stymie his work. Justice Department regulations currently allow attorneys general to cite a conflict of interest as one of the possible grounds to remove a special counsel from office.

A close adviser to the president denied that Trump is pushing back against Mueller's investigation and that he simply made inquiries into the extent of his pardoning authority. “This is not in the context of, ‘I can’t wait to pardon myself,'” the adviser said.

The power to pardon is granted to the president in Article II, Section 2, of the Constitution, which gives the commander in chief the power to “grant Reprieves and Pardons for Offences against the United States, except in Cases of Impeachment.” That means pardon authority extends to federal criminal prosecution but not to state level or impeachment inquiries. No president has sought to pardon himself, so no courts have reviewed it.

Responding to the story earlier this morning, one of Trump's attorneys, John Dowd, said it was “not true” and “nonsense.”

“The President’s lawyers are cooperating with special counsel Robert Mueller on behalf of the President,” he said.

According to Jay Sekulow, one of the president’s private lawyers, Trump and his legal team simply wish to ensure that Meuller does not widen the probe outside the boundaries of his powers as special counsel.

“The fact is that the president is concerned about conflicts that exist within the special counsel’s office and any changes in the scope of the investigation,” Sekulow said, citing reports that Meuller is scrutinizing some of Trump's business dealings. “The scope is going to have to stay within his mandate. If there’s drifting, we’re going to object. They’re talking about real estate transactions in Palm Beach several years ago. In our view, this is far outside the scope of a legitimate investigation."

Trump has continuously dismissed, if not outright derided, the investigation into his campaign's possible collusion with the Russians as "a witch hunt." As the probe expands, he could find himself coming to blows with an investigative team with the ability to study any crime it examines as part of the investigation, including tax fraud, lying to federal agents and interference in the investigation.

The Washington Post report comes little more than a week after the president’s son, Donald Trump Jr., revealed that he met with a Russian lawyer during the presidential campaign. An intermediary for the lawyer promised damaging information about Hillary Clinton, the Democratic opponent. Trump Jr.’s emails contradict months of denials by the Trump administration of any collusion with Russian operatives.

Trump's son-in-law and close adviser Jared Kushner has also faced increased scrutiny after a report surfaced that he met with both Sergey Kislyak, the Russian ambassador to the United States, and Sergey Gorkov, the head of a state-owned Russian development bank, to discuss issues including sanctions. During his meeting with Kislyak, he purportedly suggested establishing a secure communications line between Trump officials and the Kremlin at a Russian diplomatic facility. The meeting occurred as Kushner’s company sought to finance its $1.8 billion purchase of an office building on Fifth Avenue in New York, and could, The Washington Post reports, “raise questions about whether Kushner’s personal financial interests were colliding with his impending role as a public official.” Last month, Meuller confirmed he will investigate Kushner’s business dealings as part of the larger probe into Russian interference.