Ivanka and Jared Used Personal Accounts to Do Government Business, and Now House Dems Are Going After Those Messages

Did somebody say emails? 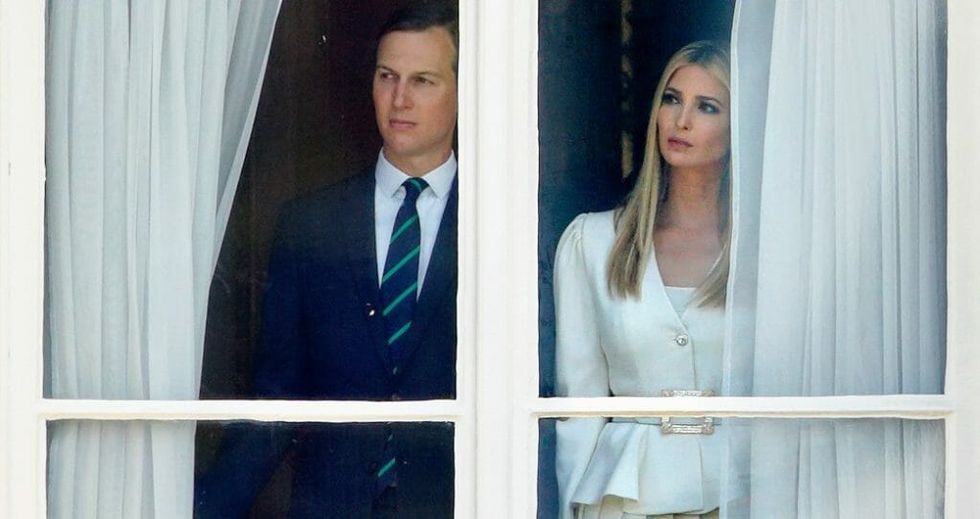 Jared Kushner and Ivanka Trump look out of a window of Buckingham Palace during the Ceremonial Welcome in the Buckingham Palace Garden for US President Donald Trump on day 1 of his State Visit to the UK on June 3, 2019 in London, England. (Photo by Max Mumby/Indigo/Getty Images)

Federal government officials with security clearances are expected to practice vigilance with their official files, records and correspondence. But since taking office, President Donald Trump's administration has been cited repeatedly for using personal devices, servers and commercial apps for official government business while failing to forward the correspondence to official email.

Secretary of State Hillary Clinton was cited for using a personal email server, but did comply with the legal requirement to forward messages which cleared her of violating federal law. But "lock her up" and Clinton's emails remain a talking point for Trump supporters years after the presidential campaign.

The House Oversight Committee voted Thursday to subpoena White House records including two top White House advisers, Ivanka Trump and Jared Kushner. Both have participated not just as advisers to the President but also in meetings and negotiations with foreign governments.

All White House officials are subject to the subpoena the House committee voted to authorize Thursday. But much of the emphasis is on Ivanka Trump using her private email and Kushner's use of WhatsApp for discussions with world leaders.

"I don’t know how to say this any differently: We have laws. And the laws say we keep official records."

Democrats raised concerns over a year ago that practices in the Trump White House violate the Presidential Records Act.

"It makes clear that White House records belong to the public—not the president."

The committee asked the White House to voluntarily turn over the records, but they refused which lead to Thursday's vote.

The vote authorized a subpoena for "all communications sent or received since President Donald Trump took office that were not forwarded to official email accounts within 20 days, as required by law, including text messages, phone-based message applications, or encryption software.”

The committee can also subpoena information regarding the presence of classified information in the unsecured and unforwarded messages. The House resolution specifically mentions acting White House chief of staff Mick Mulvaney who also serves as the Director of the Office of Management and Budget (OMB).

While the investigation actually began in 2017 when Republicans controlled the House and the Oversight Committee, Thursday's vote was split along party lines as evidenced by the Twitter posts by each side of the aisle.

The hearing was contentious.

@cspan No offense but the committee was better off without him
— MilkPublius (@MilkPublius) 1564076943.0

The prevailing question online was why Republicans—who began the inquiry—now do not want to know the answers regarding potential legal violations by the Trump White House.

@cspan This is the face of whining Republicans who do nothing to better our country, yet place blame with everyone else!
— Jeanette (@Jeanette) 1564077331.0

The White House has not yet commented if they will comply with any subsequent subpoenas. However their record indicates probably not.

"[Investigative journalist Vicky] Ward follows their trajectory from New Jersey and New York City to the White House, where the couple’s many forays into policy-making and national security have mocked long-standing U.S. policy and protocol. They have pursued an agenda that could increase their wealth while their actions have mostly gone unchecked."