This 5,000 Year Old 'Iceman' Found in the Alps in 1991 Continues to Reveal Clues About Life in the Copper Age 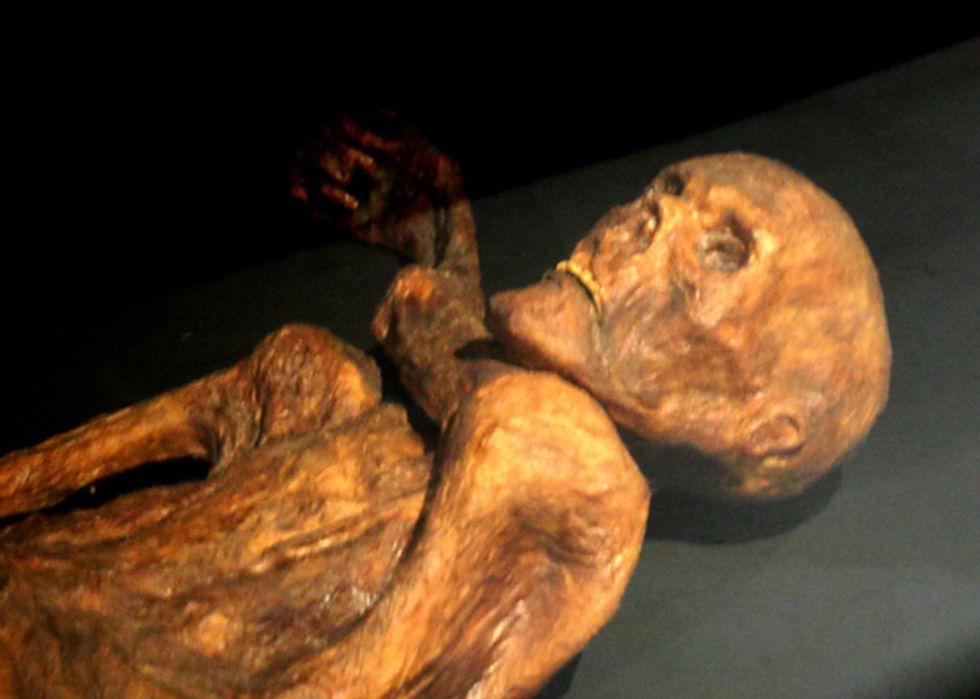 New research into the tools carried by the 5,300-year-old Italian mummy called Otzi offercompelling new details into his life and final days.

Otzi was discovered in 1991 by tourists hiking in the Italian Alps. Initially, he was treated as a suspicious death because no other mummy so well-preserved had ever been discovered in the region. Since he was carbon dated to between 3100 and 3370 BCE, Otzi has been yielding new discoveries regularly.

Using a high-powered microscope, the most recent research has determined that Otzi had very recently re-sharpened the weapons and tools that he carried with him. He was also in the process of making new weapons: an unfinished longbow and a quiver of arrows.

"Through analyzing the Iceman's toolkit from different viewpoints and reconstructing the entire life cycle of each instrument, we were able to gain insights into Otzi's cultural background, his individual history and his last hectic days," said study author and archaeologist, Ursula Wierer.

"The Iceman travelled with a compact lithic toolkit formed by few worn out, repeatedly resharpened tools, mostly used for cutting plants. Ötzi was a right-hander and had a quite good skill in pressure flaking by using his own functional retoucher.”

In 2001 — a full decade after his discovery — scientistsdiscovered Otzi’s cause of death. He was shot in the back with an arrow and the arrowhead tore through his left shoulder blade, puncturing his subclavian artery. This injury would have quickly proved fatal. The arrowhead still embedded in his shoulder is similar in shape and material to the arrowheads that Otzi wasmaking when he died.

His progress on the new longbow and arrowheads wasslowed by a significant injury to his right palm. This wound never had time to heal, so the conflict that caused it would have been less than three days prior to his death, and possibly just a few hours. Researchers now speculate that the two conflicts may have been connected; Otzi may have been building a new arsenal to replace what he’d lost in the first conflict when his attackers struck again.

Otzi’s other belongings have been on display atSouth Tyrol Museum of Archaeology in Bolzano, Italy since 1998. Previous research delved deeplyinto his clothing — made of hide, leather, and braided grass — because it’s the oldest set of preserved clothing ever discovered. He also carried a wooden backpack that contained birchbark boxes for his tools, fur boots, and a warm bearskin cap.

Perhaps most mysteriously, Otzi carried a copper ax of great value. Copper was one of the first metals humans smelted, and it lends its name tothe Copper Age when Otzi lived. Copper axes were owned by powerful men, and were buried with them. Otzi was about 42 years old when he died, which would have been a venerable age, so it’s unclear why he would have been killed and left unburied in the crevasse where he was found.

While a definitive timeline of Otzi’s last days is impossible, scientists will continue to study him for more clues about life during the Copper Age.