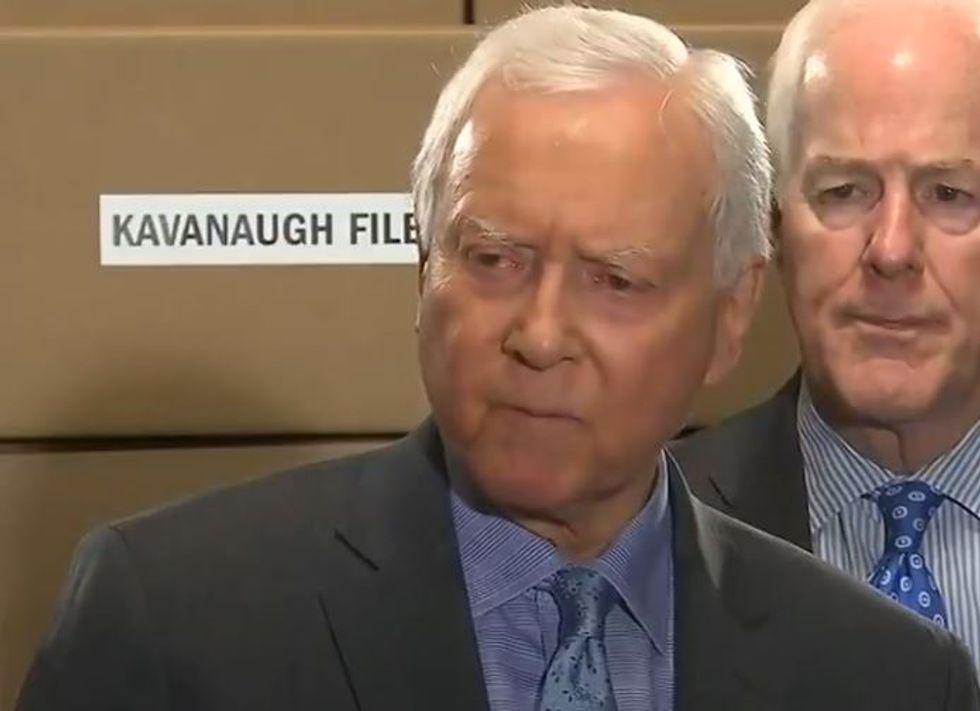 Senator Orrin Hatch (R-UT), flanked by other Republicans of the Senate Judiciary Committee, spoke to the press on Thursday.

Hatch criticized the "dumbass" partisanship that's come to characterize congress and United States political culture as a whole, particularly as it pertains to Democrats' attempts to oppose Brett Kavanaugh, Donald Trump's nominee for the Supreme Court.

"I'm tired of partisanship and frankly, we didn't treat their candidates for these positions the way they're treati… https://t.co/HDbWzflGw2
— POLITICO (@POLITICO) 1533227686.0

I want to really compliment the Democrats who have stood up and are willing to stand up for Judge Kavanaugh. We can't keep going down this partisan, picky, stupid, dumbass road that has happened around here for so long. I am sick and tired of it to be honest with you and I'm tired of the partisanship. Frankly, we didn't treat their candidates for these positions, the way they are treating ours. I would like to see us hopefully break through and change that.

Hatch is referring to complaints from senate Democrats that they haven't been supplied with enough documentation of Supreme Court nominee Brett Kavanaugh's time working for the Bush administration.

While Hatch is criticizing Democrats for partisanship, he seems to have forgotten that denying potential Supreme Court nominees put forth by Democratic presidents has become a specialty of Republicans over the past nine years. When President Barack Obama  nominated Elena Kagan in 2010, Republicans insisted on documenting an exhaustive paper trail.

Most infamously, when Obama attempted to nominate Merrick Garland in 2016, Senate Republicans--led by Senator Mitch McConnell (R-KY)--exercised their control over congress, refusing to even consider his nomination.

So Hatch seems correct in saying Republicans didn't treat candidates nominated by a Democrat with the same skepticism as Democrats are putting on Kavanaugh now. By refusing to even consider an Obama appointee, one could argue Republicans were more partisan.

Americans on social media seem to think so.

Someone tell Orrin Hatch we don’t need a lecture about “dumbass partisanship” from the man who led an egregious and… https://t.co/RIoFyH13j7
— Matt McDermott (@Matt McDermott) 1533228936.0

Unlike Democrats in 2016, Senate Republicans are in a much better position to ensure Kavanaugh's confirmation.

Despite a letter from the National Archives warning that they won't be able to provide all the records requested by the GOP until days before the midterm elections, Politico reports that the GOP intends to proceed with Kavanaugh's nomination regardless. This is thanks to the George W. Bush Presidential Library.

The original request to the National Archives is reported to be nearly one million pages of records. The George W. Bush library has begun lending its records and resources in hopes of expediting the nomination instead of risking a contentious senate battle right before the crucial 2018 midterms.

Democrats are insisting that no stone go unturned.

GOP is touting the # of docs being turned over to Congress - *BUT* they're still withholding a number of key docume… https://t.co/ZIu7fgMErQ
— Constance Boozer (@Constance Boozer) 1533217689.0

The stakes are only going to get higher as the senate battles out a confirmation that may well end up being the most lasting consequence of the Trump era.