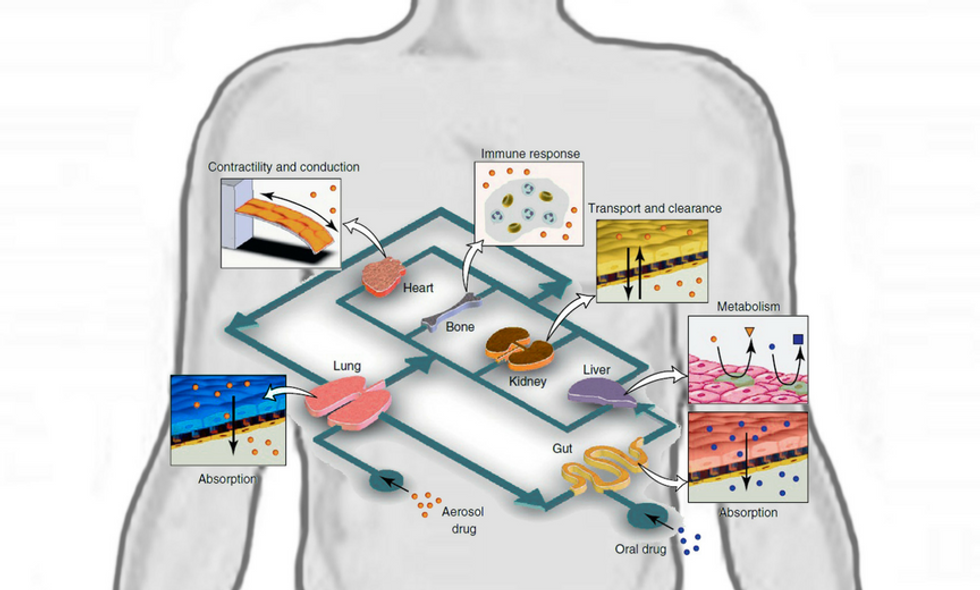 An untold number of drugs that could be toxic or ineffective on animals could actually be helpful to humans, but we have no way of knowing it. Humans and mice, rabbits, dogs, and primates have many things in common, but in the end, we are simply different animals. Which means drug testing on non-human animals has limited value. Fortunately, scientists have come up with a better plan — based on computers.

Tissue Chip, a joint initiative by the National Center for Advanced Translational Sciences, NIH Institutes and Centers, the Defense Advanced Research Projects Agency (DARPA) and the Food and Drug Administration (FDA), is developing a series of engineering microsystems that replicate the function of human organs on a transparent microchip. Based on a format familiar to the computer industry, Tissue Chip features living organ tissues lined by living cells and contain features designed to replicate the complex biological functions of the specific organs.

Chips can focus on a specific system or organ. These organs-on-a-chip, or OOCs, are less than two inches long yet can provide scientists with a wealth of information about the impact of various treatments on actual human systems — without actually testing it on a human. Plus, no animals are harmed.

“Some of these effects are really hard to predict from animal models because the situations that lead to them are idiosyncratic,” says Linda Griffith, the School of Engineering Professor of Teaching Innovation, a professor of biological engineering and mechanical engineering. “Animals do not represent people in all the facets that you need to develop drugs and understand disease.

That is becoming more and more apparent as we look across all kinds of drugs. With our chip, you can distribute a drug and then look for the effects on other tissues, and measure the exposure and how it is metabolized.”

To create an organ on a chip, scientists inject cells into chambers inside a plastic chip. Over a period of several days, the cells grow until they fill the chamber. The chambers on a chip mimic the three-dimensional shapes of critical organ parts and the way bodily fluids normally flow around the cells.

Unlike petri dish experiments, the chip model, which is based on microprocessor manufacturing, helps researchers grow cells in more life-like environments and study the way they interact with other structures and systems in a manner that replicates body systems. The stem cells come from humans, so the results are more directly applicable to human patients. The tissue chips also allowed the researchers to grow neurons and blood vessels together, which is impossible to do in petri dishes.

“I think for most people, the goal is to replace animal testing and to carry out personalized medicine in a more effective way,” said Donald Ingber, the founding director of the Wyss Institute for Biologically Inspired Engineering at Harvard University.

In theory, in addition to using the model to test new drugs, chip technology can be used to test chemicals and cosmetics, which typically are tested on animals.

The first priority is to study individual diseases. Griffith’s lab is developing a model system for Parkinson’s disease that includes brain, liver and gastrointestinal tissue, to investigate the hypothesis that gut bacteria found can influence the development of Parkinson’s disease.

The National Institutes of Health is using the model to create a spinal cord system to learn more about ALS. At MIT, scientists have linked a series of 10 organs on a chip to replicate the flow of blood through a system to test how tissues react and interact with one another when exposed to new drugs. The chip contains cells from the liver, lung, gut, endometrium, brain, heart, pancreas, kidney, skin and skeletal muscle.

Researchers at Imperial College London have usedorgans-on-chips to create an artificial liver to study hepatitis B infections. A heart-on-a-chip is being used to study the effect of new medications on cardiac tissue. A study at Penn’s School of Engineering is using a placenta-on-a-chip to better understand how drugs can cross the placental barrier. Tissue chips Biomedical engineers at Duke University have received more than $2 million to develop “tissue chips” that model atherosclerosis and muscle dysfunction in rheumatoid arthritis. The support is made possible through NIH’s National Center for Advancing Translational Sciences' (NCATS) Tissue Chip for Drug Screening program.

“The goal is for these tissue chips to provide more accurate platforms to understand diseases, and to be more predictive of the human response to drugs than current research models, thereby improving the success rate of candidate drugs in human clinical trials,” said NCATS Director Christopher P. Austin.

The hope is that chip technology will lead to better drugs. It could also lead to personalized drugs that are highly effective on the individual patient. Researchers at Cedars-Sinai and Emulate have launched a Patient-on-a-Chip program to help tailor treatments based on a patient’s genetic makeup and disease variant.

“The medical potential of a Patient-on-a-Chip is extraordinary,” said Clive Svendsen, director of the Cedars-Sinai Board of Governors Regenerative Medicine Institute. “As examples, scientists could use Organ-Chips to create a living model of a patient with Parkinson’s disease, amyotrophic lateral sclerosis or Crohn’s disease, a debilitating inflammatory bowel disorder linked to several gene mutations. By flowing drugs through Organ-Chips containing the patient’s own cells and tissue, we could predict which treatment is most beneficial for that patient.”

Organ-on-a-chip technology has tremendous potential to transform medicine. It is already transforming research. The ultimate hope is that it will save lives — for humans and animals.