A West Virginia town is just one example of overprescribing, a leading contributor to America’s ever-growing opioid epidemic. 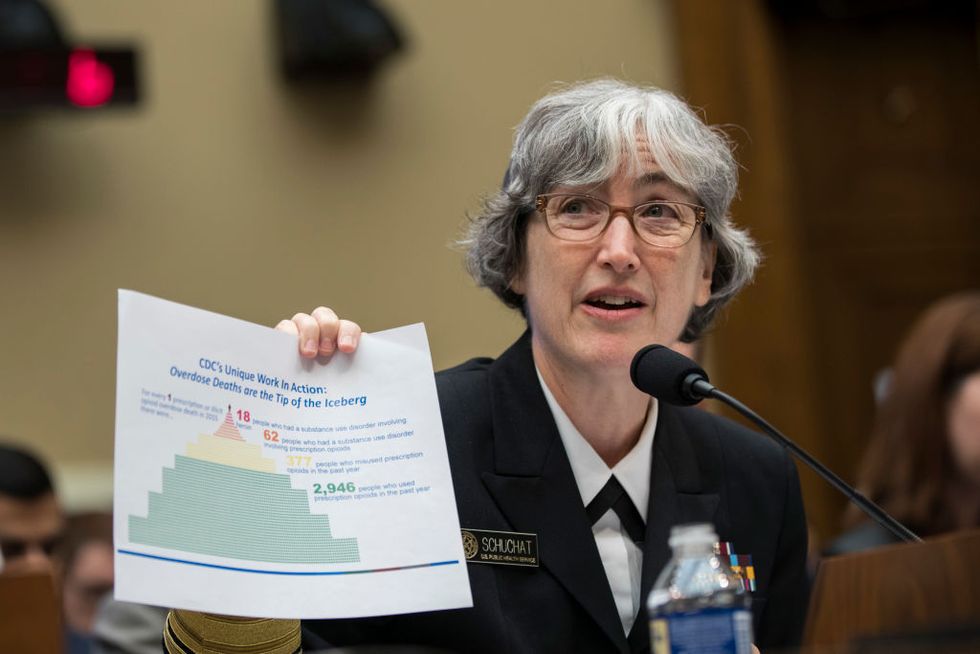 Dr. Anne Schuchat, deputy director at the Centers for Disease Control and Prevention (CDC), holds up a paper with statistics about the opioid crisis as she testifies during a House Energy and Commerce Committee hearing concerning federal efforts to combat the opioid crisis, October 25, 2017 in Washington, DC. Lawmakers on the committee threatened to subpoena information from the Drug Enforcement Agency (DEA) regarding their delayed responses about drug distributors that poured in millions of pain pills into West Virginia. (Drew Angerer/Getty Images)

A West Virginia town has become a hotbed of substance abuse and a significant example of the growing opioid epidemic. According to Beth Mole of Ars Technica, “Drug companies hosed tiny towns in West Virginia with a deluge of addictive and deadly opioid pills over the last decade, according to an ongoing investigation by the House Energy and Commerce Committee.”

She goes on to write that “drug companies collectively poured 20.8 million hydrocodone and oxycodone pills into the small city of Williamson, West Virginia, between 2006 and 2016, according to a set of letters the committee released Tuesday. Williamson’s population was just 3,191 in 2010, according to US Census data.”

In those letters, which were addressed to two drug manufacturers (Miami-Luken & HD Smith), it is apparent that an absurd amount of prescription narcotics were distributed to several West Virginia towns. There appears to have been very little concerning appropriate protocols that would have limited the number of pills distributed or that would have flagged suspicious orders.

Nearly 21 million opiate pills, over a decade, being funneled into a town of just 3,200 is a staggering, horrific statistic. A lack of proper education in many trained medical professionals as to the destructive nature of these medications, as well as the abusive nature of pharmaceutical companies, is mindblowing. According to a 2016 survey, “when American doctors give their patients narcotic painkillers, 99 percent of them hand out prescriptions that exceed the federally recommended three-day dosage limit.”

America is in the midst of an opiate epidemic that has ravaged the lives of so many people, regardless of race, religion, sexual orientation, socioeconomic status or gender. Addiction is a disease surrounded by immense stigma. Despite overwhelming medical evidence that substance use disorder is a verifiable and diagnosable disease, popular nomenclature still suggests that people become addicted as a result of a weak will or as a result of poor choices.

Addiction continues to accumulate a nearly unfathomable death toll. In 2016 alone, over 64,000 Americans died from drug overdoses. That is a higher number of deaths than the number of people killed in both the Vietnam and Iraq wars combined. The war on drugs is a systemic failure, as more and more Americans continue to be hooked on these dangerous substances. Doctors have become the new drug dealers. Although addiction has always been an issue, more people are only now taking notice, given that the disease has claimed more white, middle-class American victims than ever before.

It bears repeating that addiction is not a moral failing. Addiction is a disease that comes to fruition through a combination of genetic and environmental circumstances  Substance abuse is likely a coping mechanism that develops as a result of trauma or maladaptive life experiences. Individuals with a genetic predisposition are more prone to developing said coping mechanism, increasing the likelihood of abuse and eventually addiction. Scientifically speaking, addiction rewires the brain and completely overrides an individual’s ability to exert impulse control. The power of choice over the addiction is lost.

As a disease, addiction should be treated as a public health issue. However, as evidenced by the war on drugs, addiction has historically been treated as both a criminal and political issue. Current prevention and harm reduction measures are negligible at best. Despite considerable evidence that addiction is a treatable public health issue, it continues to be treated like a criminal problem. It is a problem that will continue to worsen, until our measures to fight the disease are course corrected on a systemic level.

According to CNN, “Prevention remains elusive. Although every state has a Prescription Drug Monitoring Program (PDMP), which aims to identify and prevent prescription drug abuse, only 16 states require medical providers to use PMDPs. PMDPs are a top-down approach to the crisis, but more can be done to educate from the bottom up. More than 92 million Americans—38 percent of the population—were prescribed opioids in 2015, where an average of 5 percent of adults were misusing the drugs. Many times, doctors have no idea that their patients are more naturally susceptible to abusing opioids, and some patients have no idea until it is too late.”

America is pill-happy. Immediate gratification—the idea that a pill can take away pain, emotional or physical, is extremely appealing en masse. The instant relief brought about by these medications is as alluring as it is dangerous.

Doctors are overprescribing highly addictive medications to a population that is drastically misinformed about the factual and systemic nature of addiction.  This week, another state has taken official action against Big Pharma. Alabama has filed a lawsuit against Purdue Pharma LP, alleging that the company failed to accurately report the risk and benefits of opioids. They argue that this misrepresentation has enabled many physicians to overprescribe the consequential medications.There are a few doctors who are thankfully intuned with their own responsibility and culpability.

According to Dr. Marty Makary, a John Hopkins health policy expert, overprescribing is commonplace for many physicians. “When I was taught to give every surgical patient a prescription for 30-90 opioid tablets upon discharge. The hundreds of excessive opioid prescriptions I wrote in 2015 alone (the last year for which national data are available) were a tiny part of the country’s 249 million opioid prescriptions filled that year, almost one for every American adult. Last year, America produced 14 billion opioid pills (40 for every U.S. citizen), mostly paid for by the American public in the form of tax dollars or increasing health insurance premiums.”

Prescriptions, of course, can be expensive for many Americans. Often, when addicts run out of their prescriptions, they will often turn to illicit opioids, such as heroin, to sustain the deadly habit. Today, a great deal of street heroin is cut with Fentanyl, a synthetic opioid medication 100 times more potent than morphine. This is yet another factor contributing to the rise in overdose deaths. In fact, overdose is now the leading cause of death for Americans aged 25-50.

Are doctors, pharmaceutical companies, or both, to blame for the opioid epidemic? While addicted individuals are surely responsible for their behaviors and action while under the influence, it is possible that big pharma does hold some culpability for perpetuating, strengthening, and sustaining the epidemic. This is not to place blame on one single entity. However, addressing the crisis with the appropriate tenacity will require all parties involved taking responsibility for the actions that have contributed to this public health nightmare.

“There is some significant evidence that pharmaceutical companies may have engaged in some activities that led to the opioid crisis. A Los Angeles Times investigation into Purdue Pharma, for instance, found that the drug maker, which marketed OxyContin as relieving pain for 12 hours, knew that the drug wore off before that time period. Since the drug didn’t last as long as promised, some patients suffered withdrawal, which led them to become addicted. (Purdue responded that OxyContin had been approved by the FDA as a 12-hour drug, and said it was working to “address our nation’s opioid epidemic.”),” writes Alana Semuels of The Atlantic.

Deceptive practices, such as the unethical actions of pharmaceutical companies like Purdue, are only part of the problem. Combating the opioid crisis will require a lot more than administrative changes in health care policy—not that the Trump administration has actually done anything to effectively manage or combat this issue.

According to Senator Edward J. Markey (D-MA), President Donald Trump’s administration has offered no plausible assistance for a crisis that continues to grow at record rates. “America is hemorrhaging lives by the day because of the opioid epidemic, but President Trump offered the country a band-aid when we need a tourniquet. Instead of a commitment to emergency funding for our state and communities, President Trump offered empty words and half-measures,” he said, in response to Trump's 2017 opioid crisis announcement.

Beating this crisis will require educating people on the legal and consequential dangers of prescription drugs and about more collaborative monitoring of prescriptions within each state and municipality. Destigmatizing and fighting this epidemic will require waging multiple wars—politically, economically and culturally.

Of course, appropriate access to affordable healthcare is an issue. America’s current treatment models are extremely expensive. Underinsured and low-income addicts are often unable to obtain proper access to treatment. Sadly, many of these individuals opt for incarceration, given that the criminal justice system does currently offer some modicum of access to treatment, as paid for by the city of the state. A reallocation of these resources into more efficient intervention without legal consequence would have a significant impact on this crisis.

We must continue to educate. Addiction is a disease; attempting to discredit this fact serves merely to sign the death warrant for the addicts who still suffer. We must insist that our government continue to fund effective prevention and treatment programs, to effectively help the growing number of Americans who silently suffer as a result of this catastrophic disease.  Abusing our criminal justice system to combat a public health issue will never successfully eradicate this problem. Last, but certainly not least, we need to insist that tighter controls (i.e., more pharmacy registries, fewer narcotic prescriptions written) be implemented to reduce the access to prescription medications, given that it is a leading contributor to the problem. A complete overhaul of current practices and standards is critical if we ever hope to quell this dastardly epidemic.