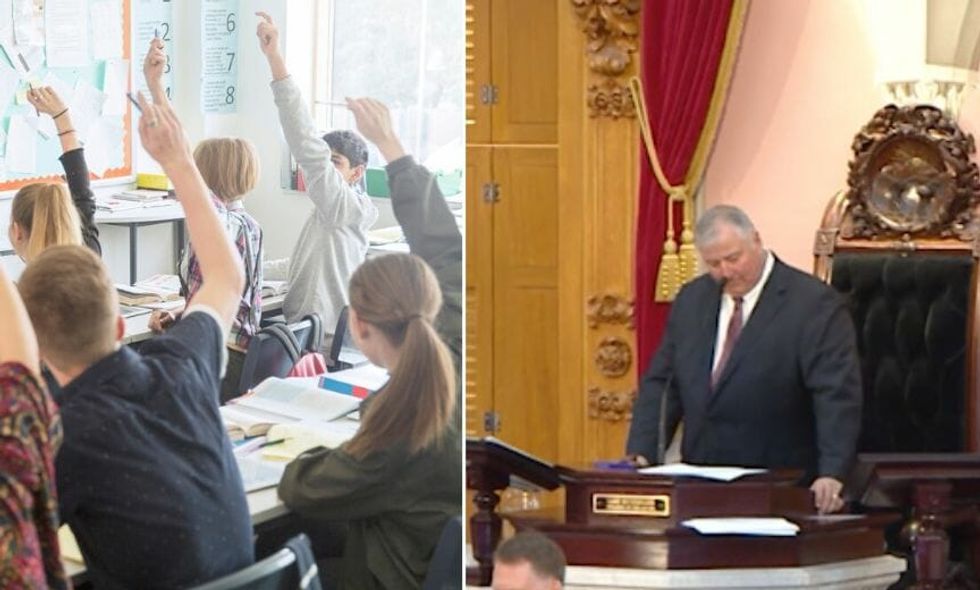 It's a common Republican talking point that students—especially those in universities—are coddled by their professors, prioritizing students' feelings and strongly-held beliefs over a well-rounded education.

Yet, in a stunning rejection of scientific facts, the Ohio House of Representatives passed H.B. 164, or the Student Religious Liberties Act, on Wednesday. The bill allows public school students to give inaccurate answers to scientific questions, as long as their inaccuracies are religiously based.

Every Republican in the Ohio House voted for the bill.

"No [public academic institution] shall prohibit a student from engaging in religious expression in the completion of homework, artwork, or other written or oral assignments. Assignment grades and scores shall be calculated using ordinary academic standards of substance and relevance, including any legitimate pedagogical concerns, and shall not penalize or reward a student based on the religious content of a student's work."

The bill's sponsor, State Rep. Timothy Gunter, assures that students would still have to reflect what they are taught, but critics say the policy is too broad to be implemented equally, with no guarantee that accuracy would outweigh doctrine.

Not sure when the Ohio GOP became the anti-science party, but here we are. 🤷‍♀️ Ignoring science and evidence never… https://t.co/SzGIA0alGW
— Rep. Allison Russo (@Rep. Allison Russo) 1573679877.0

Has America reverted to the dark ages? This is an abomination and an atrocity of a monumental scale to education.… https://t.co/wmrMBua05o
— Gerald Kutney (@Gerald Kutney) 1573820801.0

Science is science!!! This is insane. So if I make a religion that said that metaphase doesn't exist or the earth i… https://t.co/CVkrKeaiVy
— Rachel Dickinson (@Rachel Dickinson) 1573841379.0