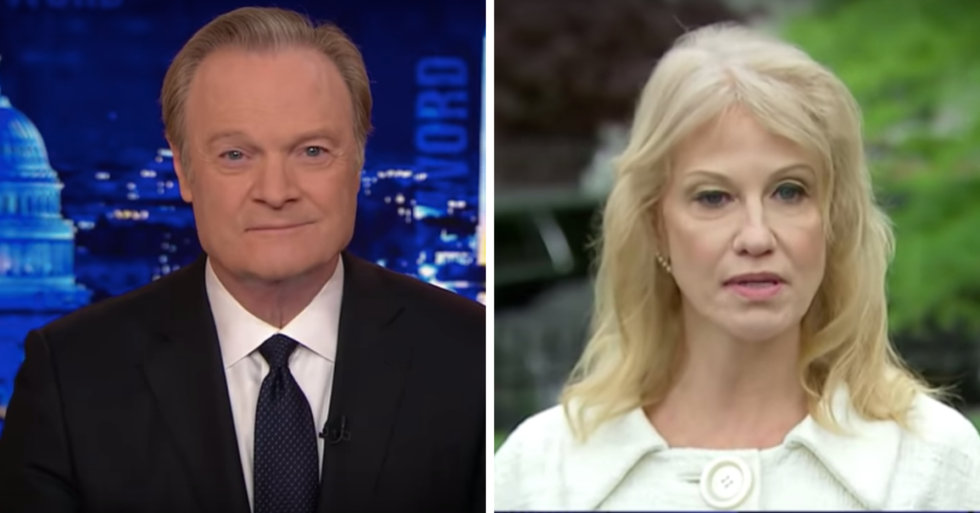 Lawrence O'Donnell accused presidential counselor Kellyanne Conway of breaking federal law when she disparaged Joe Biden in remarks to reporters on the White House lawn. O'Donnell, the host of MSNBC's "The Last Word," says Conway violated the Hatch Act, which prohibits government employees––the exception being elected officials––from using their official positions to influence the result of an election.

Conway made sarcastic remarks about Biden last Tuesday and Wednesday.

“Oh we must be worried about Biden,” Conway said. “Look at what Kellyanne said today, so thanks for the free commercial on all the things Joe Biden didn’t get done for the eight years he was vice president.”

“I do find it fascinating that the former Vice President Joe Biden said that he asked President Obama not to endorse him, do not endorse me. But we know he’s open to endorsement because he got it from the management of the firefighters," she said the following day. "Will be fascinating to watch the other candidates who are tied within a margin of error in most polls,” Conway continued. “I can talk about them too, if you’d like, no problem.”

“Yes problem, very serious problem,” O’Donnell said. “It is the problem of breaking the law.”

You can hear Conway's remarks and O'Donnell's commentary in the video below.

Conway has been accused of violating the Hatch Act before.

In March 2018, the Office of the Special Counsel (OSC) charged that Conway had violated the Hatch Act twice in 2017 when she campaigned for Alabama Republican Senate candidate Roy Moore and criticized Doug Jones, the Democratic candidate who ultimately won the election.

The OSC wrote that Conway “impermissibly mixed official government business with political views about candidates in the Alabama special election" and recommended “consideration of appropriate disciplinary action” by Trump, who has not enforced the law.

“She did it before, she got away with it when she trashed Doug Jones, and goes to the exact same spot trashing Joe Biden,” Painter said. “The presumptive punishment is firing. They should have fired her the first time. If President Trump will not remove White House officials who are clearly violating the law, he’s not doing his job and this would be yet another grounds for Congress considering impeaching and removing the president.”

Painter also pointed out on Twitter that Conway's comments on Biden come as polls show that Biden leads the Democratic primary field by 30 points."

No wonder @KellyannePolls trashed on Biden in an official interview on the White House lawn — in violation of the H… https://t.co/RCzjBtWgFz
— Richard W. Painter (@Richard W. Painter) 1557062921.0

Others have also called for Conway to face consequences.

Public employees are prohibited by the Hatch Act from working for a candidate and from making public comments. IT I… https://t.co/3QQTHk1MFq
— janetmoulton (@janetmoulton) 1556917549.0

In addition to her Hatch Act violations, Conway was once accused of violating a regulation from the Office of Government Ethics (OGE) that bans federal employees from endorsing products or companies and prohibits the use of public office for the personal gain of oneself or friends and relatives.

"Go buy Ivanka’s stuff is what I would tell you. I hate shopping. I’m going to go get some myself today… This is just wonderful line. I own some of it. I fully — I’m going to give a free commercial here. Go buy it today, everybody. You can find it online," Conway said on Fox News.

“Conway’s encouragement to buy Ivanka’s stuff would seem to be a clear violation of rules prohibiting misuse of public office for anyone’s private gain,” Don W. Fox, former general counsel and former acting director of OGE said at the time. “This is jaw-dropping to me. This rule has been promulgated by the federal Office of Government Ethics as part of the Standards of Conduct for all executive branch employees and it applies to all members of the armed forces as well.”