Alexandria Ocasio-Cortez Just Announced She's Planning to Come For Donald Trump's National Emergency Declaration, and People Are So Here For It 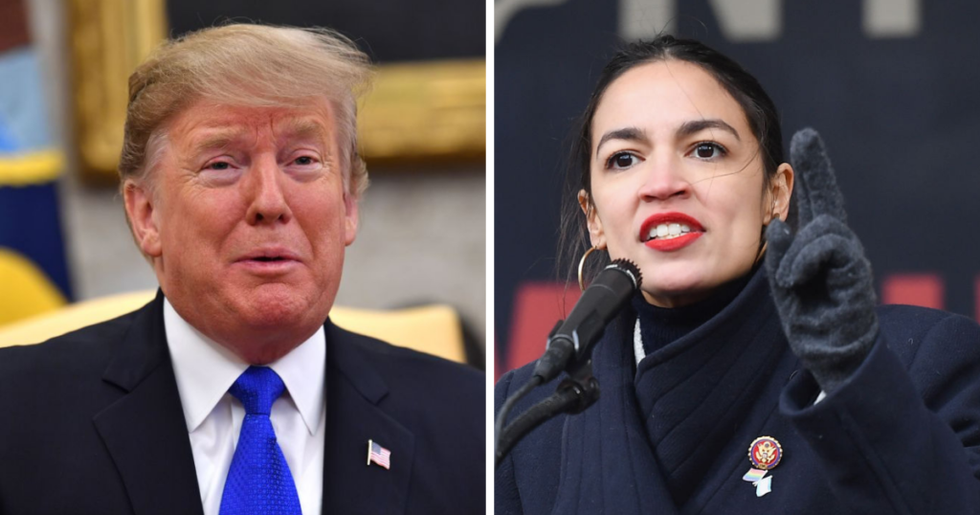 In response to the news, first reported by Bloomberg, Ocasio-Cortez promised that she and her colleague "aren't going to let the President declare a fake national emergency without a fight."

Details about the legislation are forthcoming. In a statement of his own, Castro signaled that the president will face a heap of legal challenges in response to the declaration, which the president will use to access billions of dollars to construct a wall at the U.S.-Mexico border after Congress denied his requests for funding.

As Castro noted in his statement:

The National Emergencies Act (NEA) includes a process by which Congress can terminate a national emergency through expedited legislative procedures by enacting a joint resolution. Under the NEA, a joint resolution to terminate a declared national emergency must be reported out of the committee of jurisdiction within 15 calendar days and considered on the floor within 3 calendar days after being reported. The joint resolution must then be referred to the appropriate committee of the Senate with an identical expedited process and timeline.

Many cheered the young Congresswoman and her cohort on as they sent the first of what are sure to be many challenges––legal and otherwise––to an announcement that was considered controversial well before it was formally made.

@AOC @JoaquinCastrotx The only national emergency for him is that the D's took over the House. Why wasn't this an e… https://t.co/5cxGcyplb0
— pangilinan (@pangilinan) 1550252217.0

@AOC @JoaquinCastrotx Thank you for being a rare voice of sanity in this time - your twitter feed is actually a muc… https://t.co/szEei3po4M
— Eastern Branch (@Eastern Branch) 1550243749.0

Earlier, Ocasio-Cortez joined many in Congress, including House Speaker Nancy Pelosi and Senate Minority Leader Chuck Schumer, in accusing the president of manufacturing a "crisis."

Aiding criticism that the crisis is fake: The president's own reasoning for declaring a national emergency in the first place.

“I could do the wall over a longer period of time,” he told NBC’s Peter Alexander when asked about his prior statements on the merits of executive orders, which he had long accused former President Barack Obama of using to circumvent the decisions of Congress. “I didn’t need to do this, but I’d rather do it much faster."

That statement alone has also opened up the president to criticism.

"Trump predicts that he will lose in court on his national emergency. Until it gets to the Supreme Court. Where he has appointed two justices with long track records of supporting expansive claims of executive power," said The Washington Post's James Hohmann.

Responding to the president's statement that he "didn't have to" declare a national emergency, Financial Times editor Edward Luce said: "Trump has just told the Supreme Court why to strike down his national emergency."

The news that Trump would declare a national emergency was first confirmed to reporters by Senate Majority Leader Mitch McConnell, who said Trump would sign the measure to avoid another government shutdown.

Although McConnell urged Trump not to invoke his emergency powers, he is standing by his decision anyway, a decision that did not escape the ire of conservative pundit Ann Coulter, who noted that declaring a national emergency would do nothing and that all Republicans, whom she accused of “selling out their constituents” would need to do is to pass a bipartisan spending bill with a veto-proof majority.

In a statement, McConnell called the president's decision "the predictable and understandable consequence of Democrats' decision to put partisan obstruction ahead of the national interest."

The GOP has continued to face heavy criticism for placating the president and claiming that House Speaker Nancy Pelosi and Senate Minority Leader Chuck Schumer’s unwillingness to negotiate had caused the shutdown.

In reality, the president preemptively accepted ownership of a then-possible shutdown.

The president has insisted that border security is unachievable without a wall at the southern border. He’s been quick to remind the American people this as the government shutdown over the wall’s funding rages on and continues to use his Twitter account to advocate for the wall’s construction.