Fox News Went After Alexandria Ocasio-Cortez for Insisting on a Living Wage for Her Office Staff, of Course, and AOC Just Clapped Back 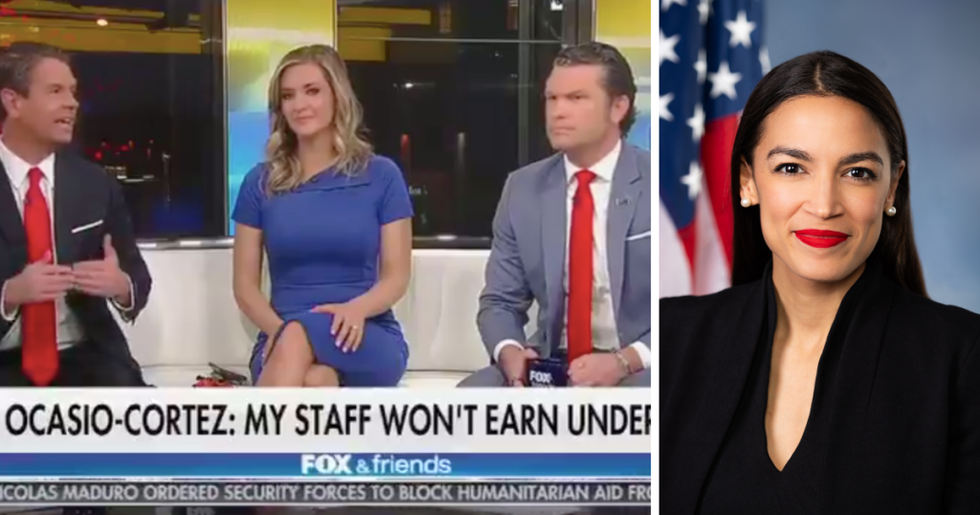 "Fox and Friends" co-host Pete Hegseth thinks Representative Alexandria Ocasio-Cortez (D-NY) is a communist because she pays her Congressional staff a living wage.

"It’s actually socialism and communism on display," Hegseth said in response to Ocasio-Cortez's decision to up the salary of her entry-level staffers to a living wage.

Ocasio-Cortez soon fired back, saying the GOP "is so disconnected from the basic idea that people should be paid enough to live," adding that calls of "socialism" are the GOP's "go-to attack for any common-sense, humane policy."

Many concurred with the freshman Representative...

Fox News has dedicated significant coverage to Representative Ocasio-Cortez, the self-described “democratic socialist” whose landmark election win made her the youngest woman to serve in Congress and unseated Joe Crowley, a longtime Democratic incumbent. Their coverage of her is so extensive, in fact, that it prompted CNN to declare that “Fox News has found a new ‘villain’ in Alexandria Ocasio-Cortez” in an op-ed dated November 25, 2018.

Criticisms of the Ocasio-Cortez have poured out of the network regularly.

In recent weeks, Fox News personality Laura Ingraham, the host of The Ingraham Angle, called on wealthy CEOs to defend their “way of life in this country” from the “latest socialist fad," a stern rebuke of Ocasio-Cortez's proposals to address economic inequality.

Ingraham made the remarks after conservative pollster Frank Luntz cited a poll that indicates “a majority of young people” prefer socialism over capitalism as an economic system.

“We have CEOs, Frank, that are running for cover,” she said. “I mean, these CEOs, who have been doing well in the Trump economy, they better get out there, get out from under their desks and start defending this way of life in this country or they’re gonna find themselves, I guess, running for the next plane to the Bahamas or somewhere else they can hide their money.”

Earlier this month, in response to Fox News’s own polling showing major support for taxing the wealthy, Charles Payne, host of Fox Business’ “Making Money” suggested that "the idea of fairness" is responsible for what Fox News anchor Sandra Smith called a “movement against capitalism":

“The idea of fairness has been promoted in our schools for a long time and we’re starting to see kids that grew up on this notion that fairness above all…and now they’re becoming voting age, and they’re bringing this ideology with them.”

The Fox News poll in question, conducted in late January, found voters “prefer increasing spending on domestic programs over cutting taxes and reducing spending, and their preferred way to finance that spending — is tax the wealthy. Among the poll’s other findings:

Fifty-one percent of voters want to spend more on programs such as infrastructure, national defense, education, and health care. That includes 63 percent of Democrats, 50 percent of independents, and 39 percent of Republicans.

At the same time, there is broad support for increasing taxes on the wealthiest families. Voters support tax increases on families making over $10 million annually by a 46-point margin (70 percent favor-24 percent oppose), and support a hike on those making over $1 million by 36 points (65-29 percent).

Ocasio-Cortez has suggested going back to a marginal tax rate of 70 percent on income over $10 million, which she says her critics have mischaracterized as a tax on all income.

“You look at our tax rates back in the sixties and when you have a progressive tax rate system, your tax rate, let’s say from zero to $75,000, maybe 10 percent or 15 percent, etc,” she said during an interview last month. “But once you get to the tippy-tops — on your 10 millionth dollar — sometimes you see tax rates as high as 60 or 70 percent. That doesn’t mean all $10 million are taxed at an extremely high rate, but it means that as you climb up this ladder, you should be contributing more.”