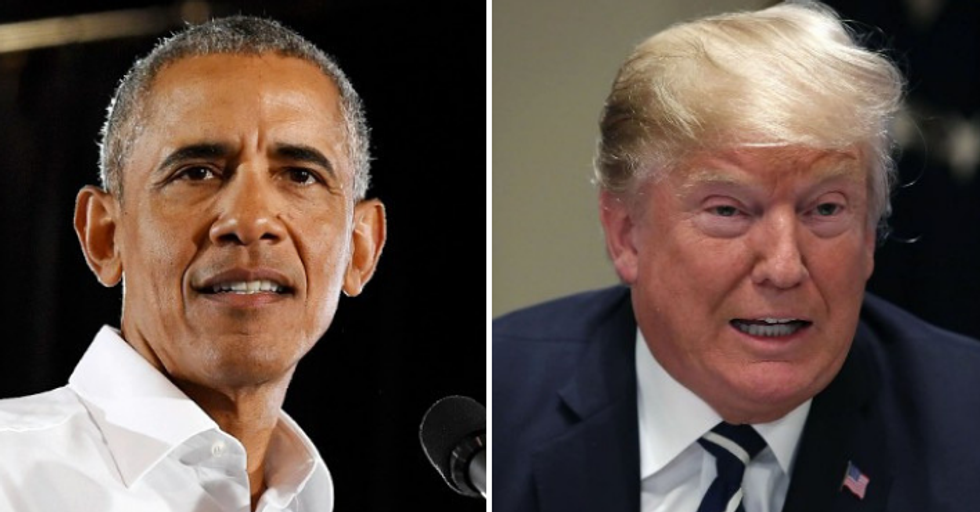 Under Trump, "our economy is finally working for ALL Americans," McDaniel wrote.

Under @realDonaldTrump, our economy is finally working for ALL Americans. Here's a 10-year challenge you haven't… https://t.co/wwuBKsgCus
— Ronna McDaniel (@Ronna McDaniel) 1548507781.0

@GOPChairwoman @realDonaldTrump We haven’t seen this before because no one else was willing to make such a stupid argument.
— Kevin M. Kruse (@Kevin M. Kruse) 1548524036.0

@GOPChairwoman @realDonaldTrump Does this idiotic person realize that as at January 26 2009, @BarackObama was in of… https://t.co/TyVtNqNOph
— Andre Bernard (@Andre Bernard) 1548523551.0

McDaniel made headlines over the weekend after she came to the defense of the Trump administration at the same time as airline traffic threatened to grind to a halt as a result of a 35-day government shutdown and as the president's former associate Roger Stone was arrested in connection with Special Counsel Robert Mueller's probe into Russian interference.

“This president and his administration continue to do incredible things for our country,” McDaniel said at the RNC's winter meeting. Although she did not acknowledge Stone by name, she did find time to refer to what she called “manufactured scandals and baseless allegations” against the president.

McDaniel also offered her audience a rather optimistic spin on the Republican Party's midterm election losses. Although the party lost 40 seats and control of the House of Representatives in November, she assured her listeners that the midterms were nonetheless a resounding success.

We minimized our losses in the House, in the face of a record 43 retirements,” she said, not mentioning that many of those same Republicans who retired did so because they feared they would not win elections in their districts due to Trump's unpopularity.

McDaniel's efforts to obfuscate the Obama administration's economic successes follows a long trail forged by the president himself.

Last year, for example, the president quoted Fox News contributor Peter Ferrara, who, in an appearance on “Fox and Friends”––the president’s show of choice––claimed that the nation’s economic recovery “got started on Election Day 2016.” Ferrara, an attorney and policy analyst, credited Trump’s “tax cuts and regulation cuts” for the healthy economy.

This claim was quickly shown to be incorrect. Digital strategist John Aravosis pointed out that the economy actually grew faster under Trump’s predecessor.

Similarly, in August 2018, in a tweet touting U.S. job growth under Trump, the White House accidentally put the strength of the economy into its proper context by amplifying a graph showing 94 months of consecutive job growth, going back to 2011.

When Obama was president.

Although Trump has often claimed that the economy has “never been better,” economists have warned that U.S. job growth is largely the result of government borrowing, and there will be more borrowing as the federal deficit rises because of the president’s tax cuts. This progress, unfortunately, is unlikely to be sustainable after a few quarters. And although the United States is on track to add 2.6 million jobs this year, an Associated Press investigation found that the boom favors Democratic strongholds, not areas which Trump won in 2016.