Barack Obama Just Took a Savage Swipe at Donald Trump In His Speech in South Africa, and the Internet Is Cheering 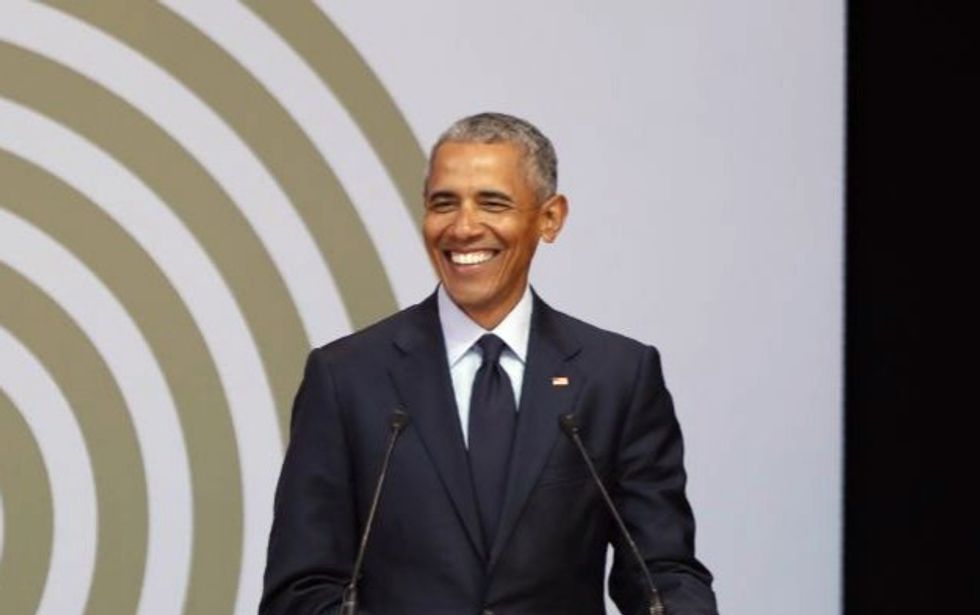 Former US president Barack Obama delivers the Nelson Mandela Annual Lecture, urging young people to fight to defend democracy, human rights and peace, to a crowd of 15,000 people at the Wanderers cricket stadium in Johannesburg on July 17, 2018, as the centrepiece of celebrations marking 100 years since Nelson Mandela's birth. (Photo by MARCO LONGARI/AFP/Getty Images)

With heightened national turmoil involving the current resident of 1600 Pennsylvania Avenue after President Donald Trump met privately with Vladimir Putin, many are looking to the man a recent poll cited as the President who has "done the best job" in their lifetime for words of wisdom. And President Barack Obama delivered.

President Obama spoke in Johannesburg, South Africa, Tuesday in a ceremony commemorating the 100th anniversary of Nelson Mandela’s birth. While he failed to mention anyone by name, his message seemed pointed and clear.

While much of his speech drew laughter, there were some important messages contained within about facts versus lies and love versus hate.

Video highlights from the nearly 90 minute speech can be viewed within this article.

Obama began his speech by characterizing the world as living in "strange and uncertain times" where "each day’s news cycle is bringing more head-spinning and disturbing headlines."

He then spoke of the bigotry that still plagues the world...

President Obama in South Africa: “It is a plain fact that racial discrimination still exists in both the United Sta… https://t.co/tQCMhNA8vo
— Keith Boykin (@Keith Boykin) 1531839886.0

...as well as economic inequality.

President Obama in South Africa: "There has been an explosion in economic inequality. A few dozen individuals contr… https://t.co/pFJLJOdbTf
— Keith Boykin (@Keith Boykin) 1531840088.0

"Look around," Obama then suggested. "Strongman politics are ascendant suddenly, whereby elections and some pretense of democracy are maintained, the form of it, but those in power seek to undermine every institution or norm that gives democracy meaning."

The former President also touched on the value of diversity as well as the commonality of shared hopes and dreams.

President Obama in South Africa: If you doubt the value of our diversity, “just ask the French football team that j… https://t.co/mxBtPxvuRq
— Keith Boykin (@Keith Boykin) 1531840947.0

And in a very pointed segment seemingly aimed at the Trump administration and their supporters, the former President took a jab at those who reject the truth and facts. Obama highlighted the differences between opinions, which can be discussed, and the rejection of truth, which leaves no room for discussion.

Obama further called out the current presidential administration for lying, then being caught in lies, only to lie more about the lies.

Too much of politics today seems to reject the very concept of objective truth. People just make stuff up...we see the utter loss of shame among political leaders where they're caught in a lie and they just double down."

The 44th President concluded his remarks with a call to reject hate and embrace love, stating,

Madiba reminds us that no one is born hating another person because of the color of his skin...People must learn to hate. And if they can learn to hate, they can be taught to love."

@CNN As a Canadian, Obama’s speech has given a sense of hope for the world. I wish every American could have witnes… https://t.co/AfnQSUn4DQ
— Deborah Richards (@Deborah Richards) 1531839547.0