Obama, Bloomberg Own the Night, Don't Hold Back Against Trump 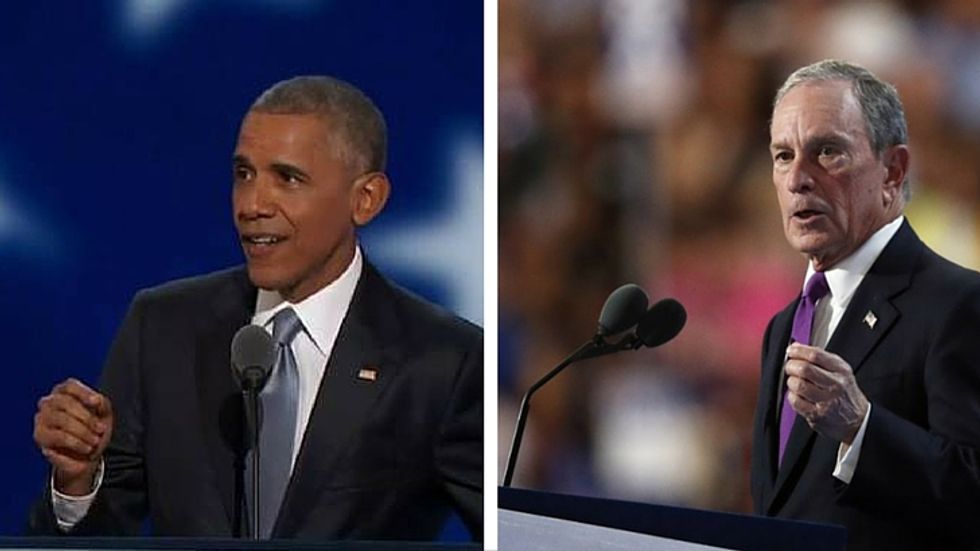 Democrats rallied around President Obama at the Democratic National Convention in Philadelphia last night as he endorsed Hillary Clinton for the presidency, acknowledging her as the only candidate capable of continuing his legacy. Though he largely refused to mention Donald Trump by name, his feelings on the billionaire tycoon’s incendiary politics were clear.

“What we heard in Cleveland [at the Republican National Convention] last week wasn’t particularly Republican—and it sure wasn’t conservative,” the president said. “What we heard was a deeply pessimistic vision of a country where we turn against each other, and turn away from the rest of the world. There were no serious solutions to pressing problems—just the fanning of resentment, and blame, and anger, and hate. That is not the America I know.”

By contrast, Obama argued, Clinton has an intimate understanding of what leading the nation requires. “Hillary’s been in the room; she’s been part of those decisions,” he said, in another attack on Trump’s credibility. “She knows what’s at stake in the decisions our government makes for the working family, the senior citizen, the small business owner, the soldier, and the veteran. Even in the middle of crisis, she listens to people, and keeps her cool, and treats everybody with respect. And no matter how daunting the odds; no matter how much people try to knock her down, she never, ever quits.”

Obama’s endorsement also drew a sharp contrast between Clinton and Trump’s respective leadership styles. Donald Trump, he said, is “not really a plans guy. Not really a facts guy, either. He calls himself a business guy, which is true, but I have to say, I know plenty of businessmen and women who’ve achieved success without leaving a trail of lawsuits, and unpaid workers, and people feeling like they got cheated… If you want someone with a lifelong track record of fighting for higher wages, better benefits, a fairer tax code, a bigger voice for workers, and stronger regulations on Wall Street, then you should vote for Hillary Clinton.”

As Obama concluded his endorsement, the crowd erupted into thunderous applause. “[And that’s why] I can say with confidence there has never been a man or a woman—not me, not Bill—more qualified than Hillary Clinton to serve as President of the United States of America,” Obama said. “And then,” he added, “there’s Donald Trump.” At the mention of Trump’s name, the crowd booed. Obama quickly called everyone

to order. “Don’t boo, vote!” he directed, in his speech’s defining moment.

Former New York City Mayor Michael Bloomberg also took the stage last night, and he did not hold back against Trump either. He urged Americans to cast their votes for Hillary Clinton because she is a “sane, competent person.” Trump, he said, is a “dangerous demagogue,” a comment which mirrored one made by late night talk show host Seth Meyers the previous evening.

Bloomberg’s speech emphasized the dangers of running the country as one would a business. Donald Trump “has left behind a well-documented record of bankruptcies, thousands of lawsuits, angry stockholders and contractors who feel cheated and disillusioned customers who feel ripped off,” Bloomberg said. “Trump says he wants to run the nation like he’s running his business? God help us.” In perhaps the most damning criticism of Trump’s business acumen, Bloomberg stated, “I’m a New Yorker, and New Yorkers know a con when we see one.”

Bloomberg, a billionaire business tycoon himself, said he understands “the appeal of a businessman president,” but cautioned his audience that Trump’s ascendancy and business plan would be “a disaster in the making.” Trump “would make it harder for small businesses to compete, do great damage to our economy, threaten the retirement savings of millions of Americans, lead to greater debt and more unemployment, erode our influence around the world and make our communities less safe.”

The former mayor has spoken openly of his disdain for the two-party system and has stressed that he is neither a Democrat or Republican. Despite being a member of the same establishment Bernie Sanders’ campaign vigorously denounced, his endorsement highlighted legitimate concerns that Trump's insurgency poses a threat to all aspects of American life.