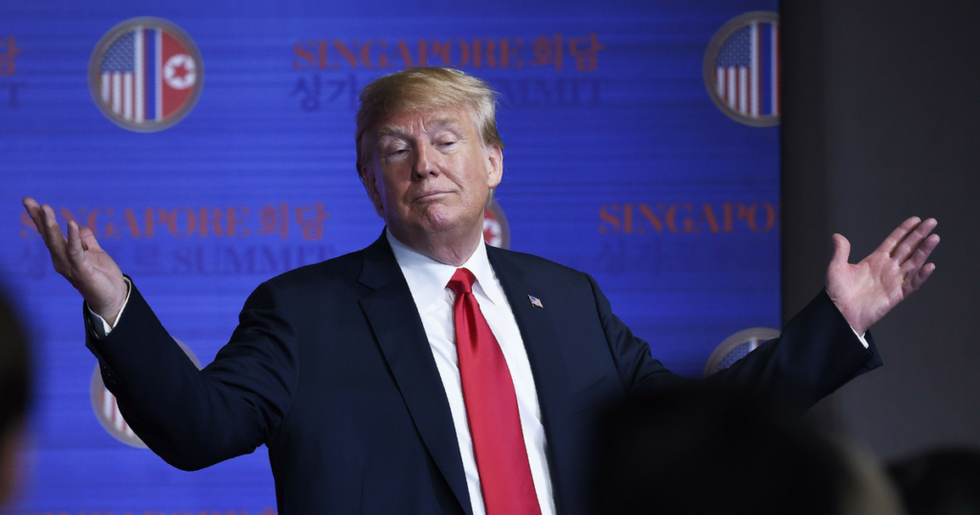 US President Donald Trump gestures after a press conference following the historic US-North Korea summit in Singapore on June 12, 2018. - Trump and North Korean leader Kim Jong Un hailed their historic summit on June 12 as a breakthrough in relations between Cold War foes, but the agreement they produced was short on details about the key issue of Pyongyang's nuclear weapons. (Photo by SAUL LOEB / AFP) (Photo credit should read SAUL LOEB/AFP/Getty Images)

Sources familiar with the intelligence say the North Koreas are working on "at least one and possibly two liquid-fueled ICBMs at a large research facility in Sanumdong," and that the missiles are a sign that Pyongyang's pledge to "denuclearize" may have been nothing more than a ruse.

"The Sanumdong factory has produced two of North Korea’s ICBMs, including the powerful Hwasong-15, the first with a proven range that could allow it to strike the U.S. East Coast," the Post's report says.

The latest intelligence indicates Trump was likely used as a propaganda tool for the North Koreans, despite his tweets and affirmations of a positive relationship with Kim.

Senior North Korean officials have discussed their intention to deceive Washington about the number of nuclear warheads and missiles they have, as well as the types and numbers of facilities, and to rebuff international inspectors, according to intelligence gathered by U.S. agencies.

“We see them going to work, just as before,” said one U.S. official.

U.S. President Donald Trump held a summit with North Korean dictator Kim Jong Un in Singapore last month, where the two spoke in private and signed a non-binding letter of intent to pursue a future Korean Peninsula free of nuclear weapons. Since then, however, there has been little indication that Kim has ordered a scale down of his country's pursuit of nuclear weapons.

The president was quick to praise Kim and himself in the hours after the summit. Following his return home from the meeting, Trump tweeted: "There is no longer a Nuclear Threat from North Korea."

Earlier this month, the president tweeted he had had "many good conversations with North Korea" and that the "fake news" was "complaining" about what was an obvious lack of effort on the part of Kim's regime to dismantle its nuclear weapons program. Trump also said that "we would now be at war with North Korea" if it weren't for him.

Dan Rather said "Kim Jong-Un was as convincing as Putin in his denials" about interfering in American elections, which Trump still has trouble accepting as truth.

The North Korea matter should remind you once again that Donald Trump is completely naive when it comes to the blan… https://t.co/n8Mf3q3XRm
— Rick Wilson (@Rick Wilson) 1532994700.0

Dealmaker-in-Chief boasted too soon that North Korea is not messing with their old missiles anymore. Rather they ar… https://t.co/ldprMjCTZE
— John Dean (@John Dean) 1533000568.0

"Who could have seen this coming? Almost everyone except President Trump."

And it wasn't just members of the media that were harshly critical of the president.

Twitter users were nearly unanimous in their lack of surprise.

@washingtonpost No one ever doubted they'd stopped. No reasonable person that is.
— Fyrecurl (@Fyrecurl) 1533040819.0

On Monday, before the Post story broke, Vice President Mike Pence said Trump had "secured a commitment" from North Korea.

Pence was referring to fallen American servicemembers whose remains are still in North Korea more than six decades after the Korean War. "We’ll see North Korea begin to follow through on the promise they made to President Trump," Pence tweeted.

But North Korea's promises appear to be vacuous and deceitful, as they have been for three generations, and the president is letting himself fall for it. The question is - now what?