North Korea Just Threatened to Cancel Trump's Summit With Kim Jong Un, and Trump Is Getting Mocked for Exactly the Reason You Think 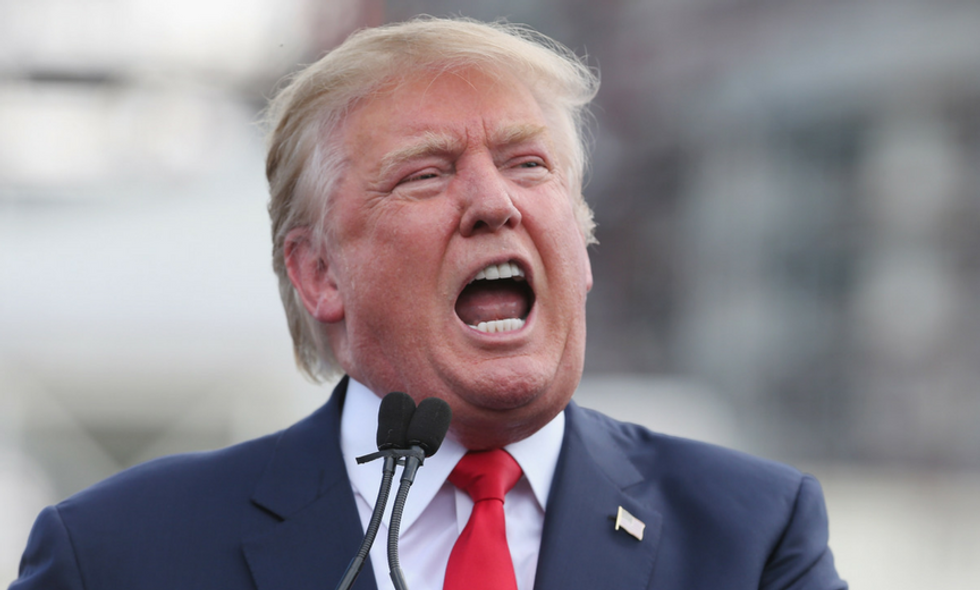 WASHINGTON, DC - SEPTEMBER 09: Republican presidential candidate Donald Trump addresses a rally against the Iran nuclear deal on the West Lawn of the U.S. Capitol September 9, 2015 in Washington, DC. Thousands of people gathered for the rally, organized by the Tea Party Patriots, which featured conservative pundits and politicians. (Photo by Chip Somodevilla/Getty Images)

Kim is also threatening to back out of the much-anticipated nuclear summit between Asian allies and the United States, which is scheduled for June 12 in Singapore.

Tuesday night that threat escalated with reporting that North Korea has no intention of denuclearizing.

The North Korean Central News Agency said on Tuesday that the "Max Thunder" drills between the South Korean and American Air Forces were a "provocation" that indicated a "rehearsal for [an] invasion of the North and a provocation amid warming inter-Korean ties."

This exercise targeting us, which is being carried out across South Korea, is a flagrant challenge to the Panmunjom Declaration and an intentional military provocation running counter to the positive political development on the Korean Peninsula. The [US] will also have to undertake careful deliberations about the fate of the planned North Korea-U.S. summit in light of this provocative military ruckus jointly conducted with the South Korean authorities.

Since the news broke earlier today, Twitter began lambasting President Donald Trump's prospects of receiving the Nobel Prize, which has been floated by Trump's supporters, the President of South Korea, as well as many members of the Republican House caucus, who nominated Trump for the 2019 award for his work on North Korean disarmament.

@sam__cooke @BBCBreaking I find it quite ironic how the South Korean president was nominating him for a nobel prize… https://t.co/25tROd2oZG
— Will Martin 🇬🇧 (@Will Martin 🇬🇧) 1526411972.0

On April 27, Kim Jong Un and South Korean President Moon Jae-in signed the Panmunjom Declaration for Peace, Prosperity, and Unification of the Korean Peninsula, marking an official end to the Korean conflict which began on June 25, 1950. The signing took place in the neutral territory known as the Demilitarized Zone, which sits on the 38th parallel of latitude between the two nations.

The United States and South Korea initially agreed to halt the aforementioned exercises as a way to encourage North Korea's participation in the 2018 Winter Olympics, which took place in Pyeongchang, South Korea in February. The "Max Thunder" exercises have been for defensive purposes only, American and South Korean officials have said, in the event of an external attack.

"We have no information on that," Under Secretary of State for Public Diplomacy and Public Affairs Heather Nauert responded. "Let's not get ahead of ourselves. We need to verify it." No further comment from the Trump administration is available at this time."

Other than that, the White House has been uncharacteristically mum, including canceling today's press briefing.

White House has canceled the on-camera press briefing for today, a day when the president is in town and working.
— Julie Davis (@Julie Davis) 1526400991.0

As of this writing, we've yet to hear anything from President Trump, Press Secretary Sanders or Kellyanne Conway about this news.