That wasn't in the signed agreement. 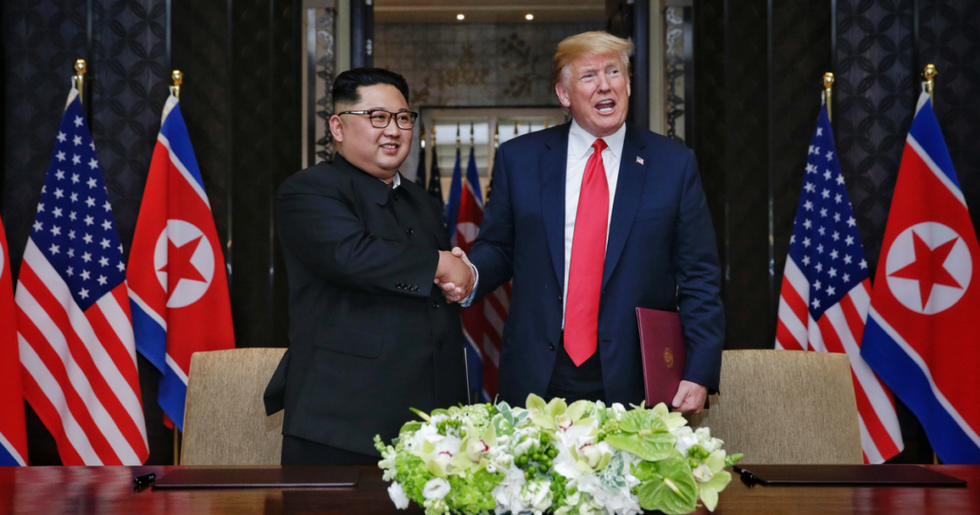 Following Tuesday's summit in Singapore between President Donald Trump and North Korean Dictator Kim Jong Un, North Korea state media has been reporting that Trump made a series of concessions to Kim that were not listed on a joint statement signed by the two countries.

North Korean state media have reported that President Trump made a raft of concessions to Kim Jong Un that were not… https://t.co/7XFKIdA6LE
— NPR (@NPR) 1528889562.0

The Korean Central News Agency (KCNA) reported that the two leaders promised to "abide by the principle of step-by-step and simultaneous action in achieving peace, stability, and denuclearization of the Korean Peninsula."

The KCNA report states: "Kim Jong Un clarified the stand that if the U.S. side takes genuine measures for building trust in order to improve the DPRK-U.S. relationship, the DPRK, too, can continue to take additional good-will measures of next stage commensurate with them."

This suggests more concessions are required from the United States, rather from North Korea, on the path to denuclearization.

A "step-by-step" process negates what Secretary of State Mike Pompeo has said, that "the model that we have laid forth is a rapid denuclearization, total and complete, that won't be extended over time."

KCNA claimed Trump promised to lift sanctions that have stifled North Korean economic growth, as well as offering security guarantees for Kim and his family, which Kim is believed to consider a non-negotiable term in discussing potential denuclearization.

What Trump had actually promised was to freeze any additional sanctions on North Korea, however current sanctions will remain in place.

"Sanctions are not an end in themselves," Chinese Foreign Ministry Spokesman Geng Shuang said, "the Security Council, through its actions, should support the current diplomatic negotiations." China has long sought to have sanctions eased on North Korea, as the two nations are close trading partners.

“The media should be cheering” Um no. Certainly if there is ultimately a denuclearized and peaceful Korean Peni… https://t.co/MRX2KFbz4J
— Jake Tapper (@Jake Tapper) 1528895934.0

The KCNA also reported that Trump promised to end annual joint U.S.-South Korea military exercises, which is something the North, China, and Russia have demanded for years. Trump unexpectedly announced his intent to cease these drills on Tuesday, following his closed-door meeting with Kim.

Trump referred to the drills as "provocative," and that stopping the "war games" would save the United States "a fortune." South Korean officials were reportedly unaware of Trump's intention.

Expressing his understanding of it, Trump expressed his intention to halt the U.S.-south Korea joint military exercises, which the DPRK side regards as provocation, over a period of good-will dialogue between the DPRK and the U.S., offer security guarantees to the DPRK and lift sanctions against it along with advance in improving the mutual relationship through dialogue and negotiation.

What specifically the two leaders discussed may never be known. Trump said notetaking wasn't necessary because he has "one of the great memories of all time."

Early Wednesday morning, Trump tweeted that North Korea is "no longer" our biggest and most dangerous problem." This is despite no concessions or formal promises from North Korea.

Before taking office people were assuming that we were going to War with North Korea. President Obama said that Nor… https://t.co/tA3JOYW9EE
— Donald J. Trump (@Donald J. Trump) 1528884100.0

Trump also tweeted on Wednesday morning that North Korea "is no longer a nuclear threat," despite no concessions from North Korea or any tangible plan to decnuclearize the reclusive country.

The agreement signed by Trump and Kim contains the weakest and least enforceable terms yet pursued by the United States in the decades-long effort to get North Korea to abandon its nuclear weapons program.

It contains no language establishing any inspections, verification, or demands for complete, unequivocal denuclearization, despite Secretary of State Mike Pompeo and other administration officials’ assurances of enforcing North Korea’s promise.

Of course, we’ve been down this road many times before, and North Korea has never kept its word.