Arizona Border City Is Demanding the U.S. Government Remove the Barbed Wire They Just Installed on The Border Wall in Town Or They'll Sue

They should know if it's needed or not. 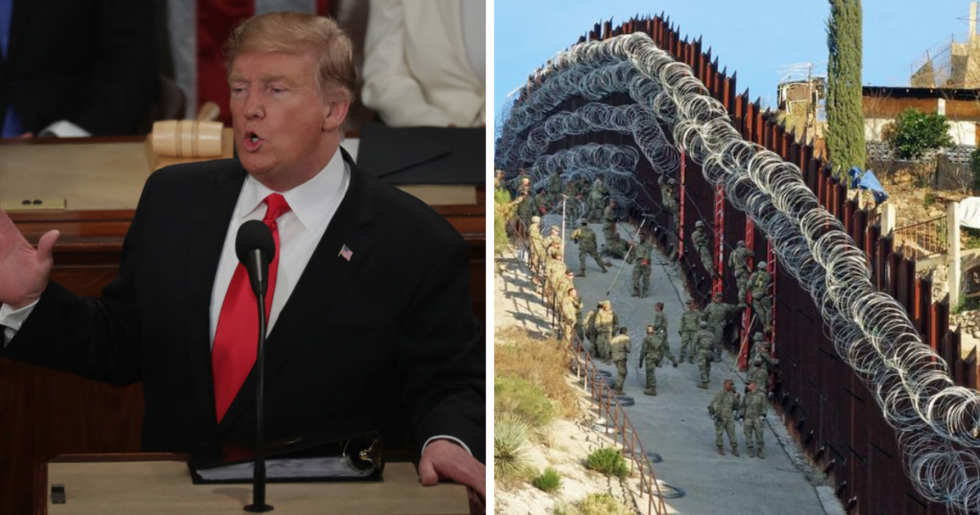 The City Council in Nogales, a small Arizona border city, passed a resolution threatening to sue the federal government should it fail to remove all concertina wire installed within the city limits.

The council's resolution says the barbed wire on the border wall, which runs through the downtown area, “is only found in a war, prison or battle setting” and would harm or kill any person or animal that might attempt to scale it.

The council's resolution says placing concertina wire along the wall is “not only irresponsible but inhuman.”

US troops are seen installing concertina wire in Nogales, Ariz., days after the Pentagon said it will deploy an add… https://t.co/V43SxoiMGZ
— MSNBC (@MSNBC) 1549406400.0

Nogales, which sits on the border with Nogales, Mexico, is home to 20,000 people.

The city's economy is dependent on Mexican shoppers and cross-border trade. Illegal crossings in the area have seen a significant drop in the last few years.

The downtown area is partly residential, with homes mere feet from the border fence.

Earlier this week, speaking to the Nogales International paper, Garino said, “That wire is lethal, and I really don’t know what they’re thinking by putting it all the way down to the ground."

Images of the wall in Nogales have sparked an outcry.

Look what the US military deployment did to the border fence in downtown Nogales, Arizona. This makes us look like… https://t.co/phJcB8rwzN
— Adam Isacson (@Adam Isacson) 1549379461.0

The council's resolution came only a day after President Donald Trump during his State of the Union address stressed the need for a border wall and announced that he has ordered 3,750 troops to prepare for what he referred to as a "tremendous onslaught":

As we speak, large, organized caravans are on the march to the United States. We have just heard that Mexican cities, in order to remove the illegal immigrants from their communities, are getting trucks and buses to bring them up to our country in areas where there is little border protection. I have ordered another 3,750 troops to our southern border to prepare for this tremendous onslaught. This is a moral issue.

The lawless state of our southern border is a threat to the safety, security, and financial well-being of all Americans. We have a moral duty to create an immigration system that protects the lives and jobs of our citizens. This includes our obligation to the millions of immigrants living here today who follow the rules and respect our laws. Legal immigrants enrich our nation and strengthen our society in countless ways.

Border Patrol made over 1.6 million arrests in 2000. At the time, there were just 9,600 agents nationwide. As the government has devoted more time and resources to staffing, surveillance technology, and fencing, that number has dropped steeply. 19,000 Border Patrol agents made 310,000 arrests during the last fiscal year.

This isn't the first time a city council has retaliated against the president's signature campaign proposal.

In September 2017, the San Diego City Council declared that border walls would be “damaging symbols of fear and division that will increase tensions with Mexico, one of the United States’ largest trading partners and a neighbor with which communities such as San Diego in the border region are inextricably linked culturally, physically, and economically.”

The council added that Trump's proposal “could destroy the vitality of U.S.-Mexico relations and act as a separation to our unique, diverse, and beautiful region.” The resolution passed 5-3, with Democrats in favor and Republicans opposed.

“We have a fence here. The fence is fine. It does what it’s supposed to do,” Margo said at the time.

“I hear the term wall, I think of the Berlin Wall. I think it’s pretty detrimental to the relationships that have lasted more than 400 years.”