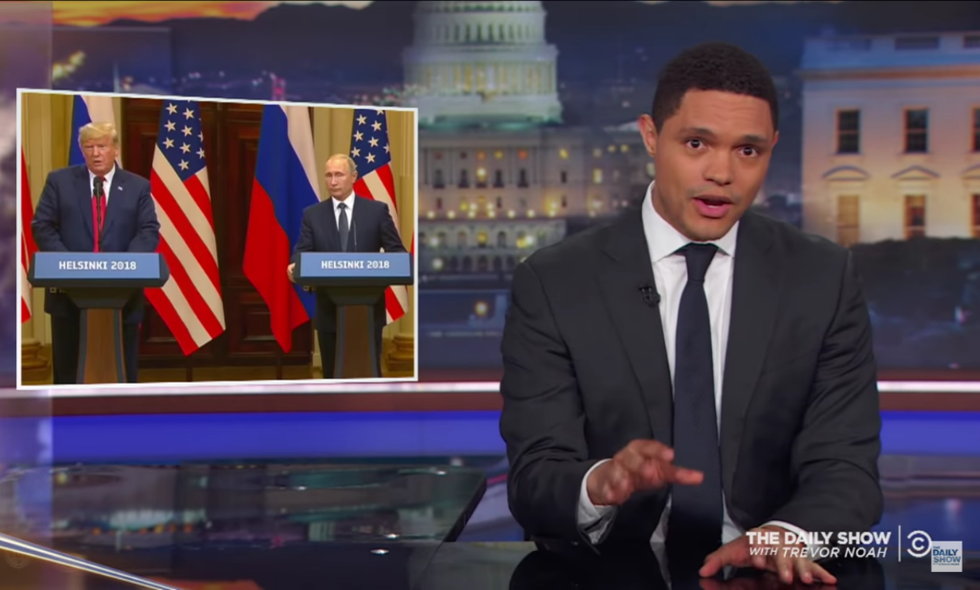 President Donald Trump returned to Washington, DC, Monday night after his trip to the United Kingdom and then Helsinki, Finland, for a closed door meeting with Russian President Vladimir Putin. But damage control for remarks the President made during that trip dominated the agenda on Tuesday.

Trump drew harsh criticism for his repeated statements —on Twitter and during a highly criticized press conference which earned the hashtag #TreasonSummit— against the United States and favoring Russia. But Tuesday he attempted to walkback his remarks, focusing on only one of his many comments, by claiming he was simply confused by the words "would" and "wouldn't."

Tuesday afternoon, the President attempted to explain everything away by claiming he had "a full faith in our intelligence agencies" —immediately after which in a bizarre coincidence the lights briefly went out in the White House. Trump went on to state when he said, “I don’t see any reason why it would be” Russia, he actually meant to say, “I don’t see any reason why it wouldn’t be” in regards to Russian hacking and interference in the 2016 presidential election.

The President's critics however, were not buying it. And one of those very vocal critics, Trevor Noah, host of Comedy Central's The Daily Show provided his own spin on Trump's linguistic confusion excuse.

"After President Trump threw America under the Russian bus, everyone stateside lost their shit and I do mean everyone," Trevor Noah began his assessment of Trump's recent trip overseas. "...They all came down hard on Comrade Trump."

"President Trump is no stranger to criticism, said Noah, "but it's not often that even his closest allies slam his actions."

So just like after Trump praised the Charlottesville Nazis, today, the President was forced to come out and pretend to believe something different than what he said."

"And I don't know if you guys believe in omens, but watch happens," Noah said before showing footage of the lights going out during Trump's walk back briefing with the press.

Noah then pointed out the President's body language after the lights came back on, noting the President asked if everyone was okay, but had gone from an open posture to hugging himself in the moments the lights were out.

"But that was insane," Noah continued.

Trump tried to claim he believes the intelligence agencies and then the lights went off. It's like even electricity is tired of Trump's bullshit."

After a joke about gravity eventually being done with Trump some day too, Noah proposed the White House has a special version of the infamous product, the Clapper, installed. But instead of clapping to turn lights on and off, Trump lies.

"Okay, so just like Trump's presidency, today's press event got off to a horrible start," Noah continued then showed footage of the President's remarks.

During those remarks Trump first states he believes the U.S. intelligence reports that Russia meddled in the 2016 presidential election.

But then Trump immediately backpedals and claims it "could be other people also, uh, there's a lot of people out there."

"What are you doing!" Noah exclaims, stating all the President needed to do was state Russia interfered in the 2016 elections and not make any further excuses for them or try to shift blame elsewhere. But, once again, Trump did not.

Noah goes on to point out that despite sort of endorsing his own country's intelligence agencies over the word of a foreign dictator with a host of human rights violations, just 24 hours earlier, the President sang a very different tune in Helsinki.

Noah then showed footage of the joint press conference with Trump and Putin where, in response to a reporter's question about the known Russian interference into the 2016 election, Trump said he asked Putin if he did it.

But because Putin was "very strong in his denial," Trump said he did not "see any reason why it would be" Russia. But on Tuesday, the President claimed he misspoke.

According to Trump he meant to say he did not "see any reason why it would be" Russia. Which has no bearing on any of the rest of the separate denials he made or the rest of his answer to the reporter's question.

And Noah called him on that fact.

You know what? That makes sense. I actually believe Trump on this..."

Noah then appeared to check his notes in a copy of the President reading from his own notes during his statement, then added,

"Are you serious?" Noah asked.

The president and his team had 24 hours —24 hours!— to come up with a reason why Trump took Russia's side against America and the best they could up with was, 'Nuh-uh'."

Regarding the double negative, Trump told reporters they could "put that in, and I think that probably clarifies things."

But Noah thought one thing was very clear after the President's attempt to walk back his Helsinki remarks, stating,