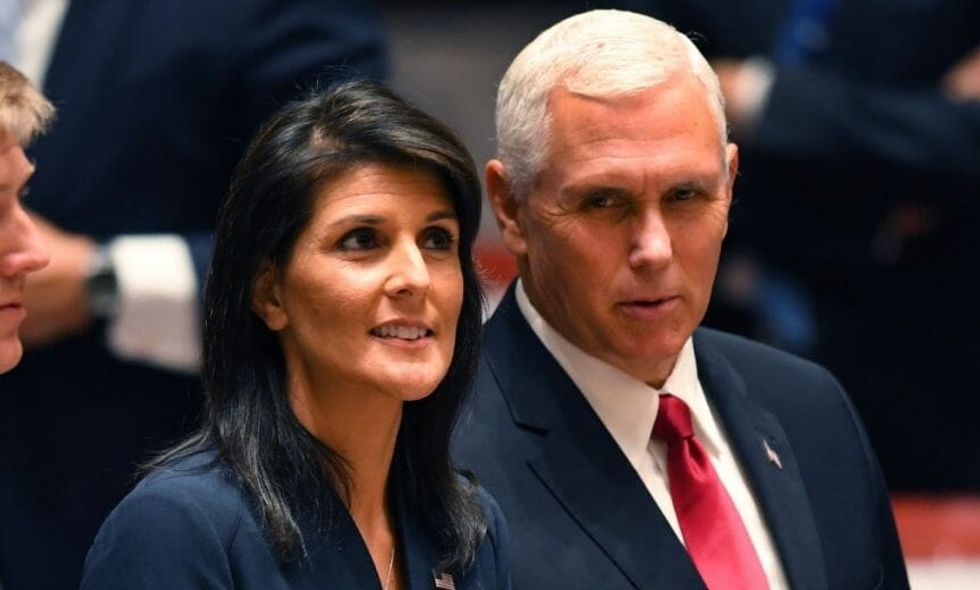 US Vice President Mike Pence (R) and Ambassador to the United Nations Nikki Haley attend a meeting of the UN Security Council on peacekeeping operations, during the 72nd session of the General Assembly in New York on September 20, 2017. / AFP PHOTO / TIMOTHY A. CLARY / Getty Images

Considered one of the more moderate Republicans who've worked for Trump, many have speculated that Haley, a former governor of South Carolina, will inevitably take a higher office. Perhaps high enough to be a heartbeat from the presidency.

Wall Street Journal opinion columnist Andrew Stein urged Trump to replace Pence with Haley on the 2020 ticket back in June. Oprah Magazine referred to her as Trump's "rumored 2020 Vice President." For his part, Trump has repeatedly assured that Pence will be under him on the 2020 ballot, and flat out said that Haley wouldn't be his VP nominee.

Now, months later, Haley addressed the rumors herself in a tweet.

But in attempting to dispel the rumor, she ended up reviving it, as many pointed out.

@NikkiHaley Fastest way to build steam for a rumor is to tweet about a rumor nobody knew existed. Do tell.
— Carl Spackler (@Carl Spackler) 1566419295.0

Besides, the picture the tweet accompanied doesn't exactly give off the vibe of a "dear friend."

@NikkiHaley Thank you for saying this while posting a photo that looks like two parents only staying together for the kids
— Mike Drucker (@Mike Drucker) 1566419143.0

Not to mention, Haley criticized Trump's Twitter rants about the city of Baltimore, Maryland and its Democratic Congressman, Elijah Cummings, last month. It's likely disqualifying because, as we've learned with Scaramucci and other Trump administration members, only unflinching loyalty will keep one in Trump's good graces.

Not to mention, the two have had their beef in the past, as evidenced with this 2016 tweet.

But if there's one way to spread a rumor it's to insist it isn't true. We'll see how it works out for Haley.