Donald Trump's Homeland Security Head Just Referred to Trump's Border Wall in the Most Creepy Way, and People Are Dragging Her Hard 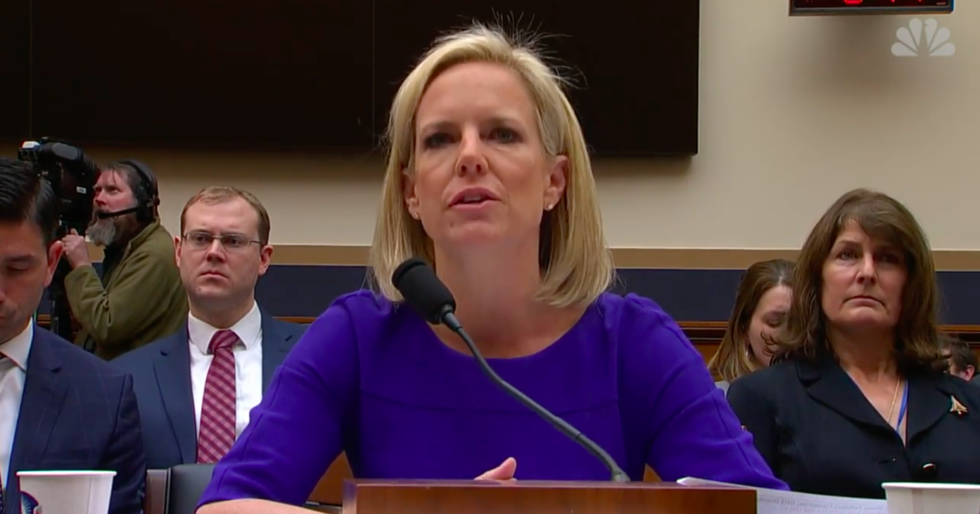 Things did not go smoothly for Nielsen who needed to account for the death of a 7-year-old girl who spent two days in DHS custody before dying of dehydration and exposure. Jackelin Caal of Guatemala died December 8, while held by DHS separate from her father with whom she came to the United States.

Then things took a bizarre turn when Nielsen appeared to forget the English language. While speaking to Republican Representative Tom Marino of Philadelphia, Nielsen stated:

"From Congress I would ask for wall. We need wall."

this is an actual quote from the secretary of homeland security of the united states, and not the incredible hulk.… https://t.co/jOp37OaLpJ
— Oliver Willis (@Oliver Willis) 1545333771.0

You see, this isn't the first time DHS has used this odd turn of phrase. In a DHS memo—titled Walls Work—released December 12, the same language was used, saying:

But by December 14 DHS revised the memo to reflect proper grammar. In the interim, many people stated it sounded like the Incredible Hulk or Cookie Monster now worked for DHS.

While Bruce Banner and Cookie Monster are keeping their day jobs, where did this language choice originate?

White House officials want the article "the" removed from references to Trump's wall. It must be referred to as "border wall" or just "wall."

And while language and phrasing choices can have a profound subliminal effect on others, the point of this particular choice remains lost on the masses however. Nielsen mostly got mocked and memed.

@owillis Hahaha. When I read the ridiculous text on the DHS website the other day I figured some syntax-challenged… https://t.co/EJioSvByl8
— Denell (@Denell) 1545336619.0

The full fallout from today's hearing may not be known until Congress reconvenes in January, at which time Democrats will control the House. Until then, the Trump administration may want wall, but will they get wall?