Trump's Homeland Security Secretary Questioned Nancy Pelosi's Reason For Delaying Trump's State of the Union, and Pelosi Just Shut Her All the Way Down 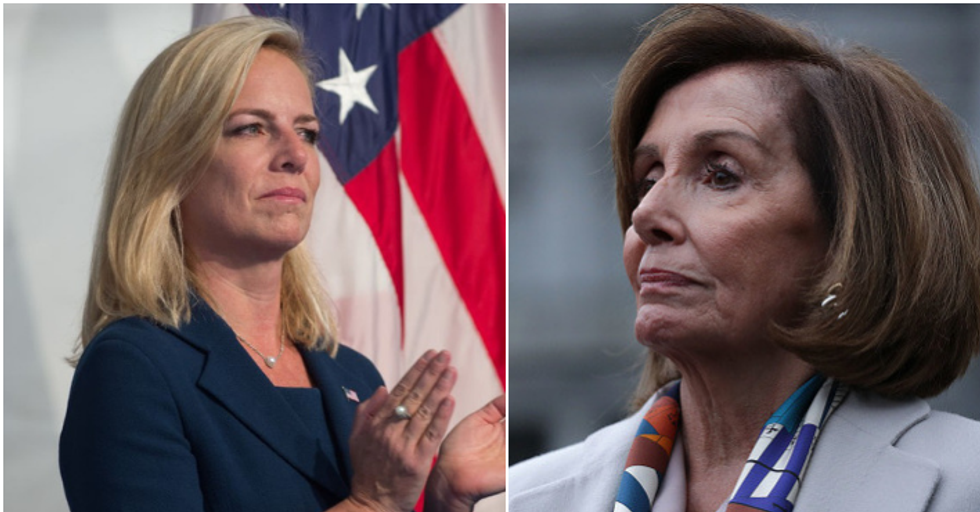 Speaker of the House Nancy Pelosi of California asked President Donald Trump to reschedule his State of the Union (SOTU) address due to the current government shutdown. One of the concerns the Democratic Speaker cited was security.

Latching on to just one issue, Trump appointee Secretary Kirstjen Nielsen of the Department of Homeland Security stated there was no merit to Pelosi's request because:

"The Department of Homeland Security and the US Secret Service are fully prepared to support and secure the State of the Union. We thank the Service for their mission focus and dedication and for all they do each day to secure our homeland."

However Secretary Nielsen forgot one important issue. But Speaker Pelosi reminded her.

While speaking to reporters, Pelosi stated:

"I’m saying let’s get a date when government is open. Let’s pay the employees. "

"It isn't a question of 'are they professional enough?' Why'd we even take it there? The question is they should be paid, and as secretary of any agency, that person should be advocating for her employees to be paid instead of saying it's okay for them to work without pay."

Because a Republican-controlled Congress and White House failed to approve the funding appropriations for nine departments in the 14 months they could have done it without Democrat's cooperation, Nielsen's Secret Service agents are not getting paid. The SOTU requires extra staffing and longer hours from multiple law enforcement agencies.

@politico The defense of Homeland Security to Pelosi's comment that the government should be open to ensure safety… https://t.co/FPLrwq9Vk1
— Wade Tharp (@Wade Tharp) 1547743091.0

But most of those agencies are not being paid if they are working or are currently furloughed without pay. Here are the nine agencies former Republican Speaker Paul Ryan, Republican Senate Majority Leader Mitch McConnell and the Trump White House failed to pass fiscal year 2019 budgets for from October 1, 2017 to January 3, 2019, when Democrats took over control of the House:

In addition to the Secret Service, Immigration and Customs Enforcement (ICE) and Customs and Border Protection (CBP) agents for which Nielsen failed to secure fiscal year 2019 budget appropriation from a GOP-controlled Congress, the National Parks Service rangers and Federal Bureau of Investigation (FBI) agents who assist when added security is needed at events in Washington DC are also not being paid.

And Speaker Pelosi does not think that is a good thing. She suggested Trump make the SOTU “from the Oval Office” or submit his speech in writing. While the invitation to present before Congress is a tradition, it is not a requirement nor has it always been a tradition.

And Pelosi is not alone in her opinion that Nielsen missed the bigger picture.

Nielsen's message of assurance received considerable pushback from more than just Pelosi. Many called into question the DHS Secretary's record overseeing the agencies under her command.

Others reminded Nielsen of her responsibilities to not just the people in her agents' custody, but to her agents.

@SecNielsen ok cool thanks for the reassurance, but the fact remains that they haven't been funded for 25 days
— marisa kabas (@marisa kabas) 1547668561.0

@MarisaKabas @SecNielsen It seems like you’d want to pay the people whose job it is to take a bullet for you... but what do I know
— suzanne zuppello (@suzanne zuppello) 1547668763.0

@SecNielsen Don't you get it? You're disinvited. Send your people to the border. Consider it your contribution to T… https://t.co/irx2r5DehH
— Sister Euphemia (@Sister Euphemia) 1547699555.0

@SecNielsen You know a really nice way to thank people? Paying them for the work they do for you.
— Liberal Quilter (@Liberal Quilter) 1547733879.0

Although a few fervent Trump supporters blamed Democrats. But they were quickly corrected.

And some thought the State of the Union was already known.

President Trump declared he would refuse to sign any measures to reopen the government until Congress agreed to give him billions of dollars, even for those eight agencies unrelated to his border wall. At the time, Trump stated he would be proud to do it and would take full responsibility for a shutdown.

Since then the President and members of his administration are now blaming Democrats for the government shutdown.