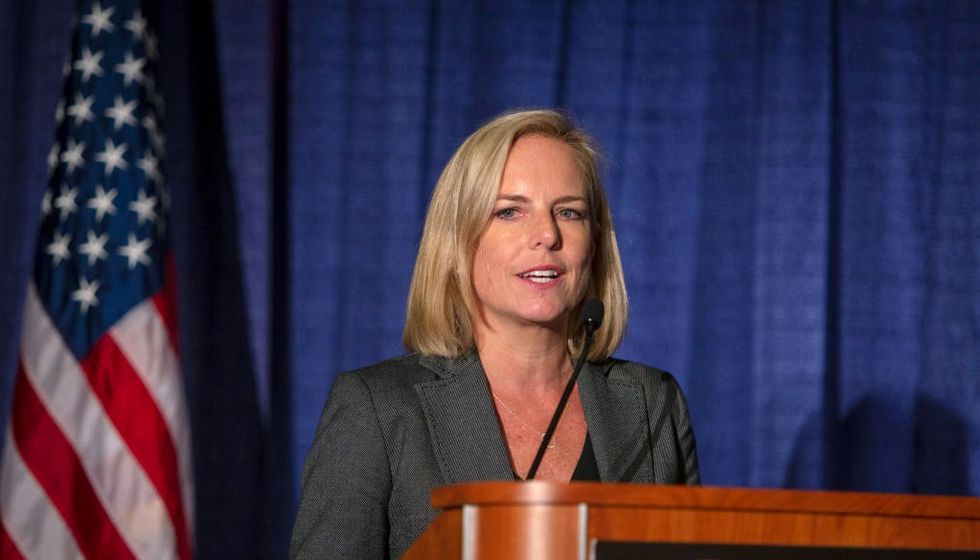 However the DHS Secretary spun a different tale of what the invited and gathered media looked at.

According to Nielsen, the open bollard style fence constitutes a wall. And not just a wall, but the border wall from President Donald Trump's campaign and rally promises.

But yeah, that's a fence.

The President specified in his campaign that a wall would be built, not a fence. And when reporters asked about the fence, Nielsen reiterated the fence was a wall.

I’m next to the #border fence in Calexico with dozens of other media outlets. @SecNielsen will be having a press co… https://t.co/JOM05S1H6U
— Rafael Carranza (@Rafael Carranza) 1540567668.0

When asked if the 30-foot tall fence of steel bollards was a fence, Nielsen said:

"It's different than a fence in that it also has technology. It's a full wall system. It's a wall, this is what the president has asked us to do. It’s part of a system."

But the prior fence that Trump deemed inadequate also utilized additional technology beyond just fencing. However the new fence is taller.

The Trump administration contracted for and tested eight border wall prototypes at a reported cost of $20 million. However all of the prototypes failed in testing.

Back in March, Trump tweeted that old photos of another section of replacement fence was his wall under construction, but was quickly corrected. This time Nielsen faces the brunt of the pushback over passing a fence off as a wall.

During the presidential campaign and subsequent rallies, Trump promised a "big, beautiful wall" that would definitely not be a fence. He also promised Mexico would pay for it.

Neither campaign promise came to fruition yet.

But despite the obvious fence visible in the background, Nielsen persisted in talking about the first section of Trump's border wall being completed. And workers even welded a plaque to the fence to commemorate the event which was livestreamed.

Despite repeatedly calling the fence a wall, people online disagreed with Nielsen.

@RafaelCarranza @SecNielsen So more of the tactical infrastructure the Obama administration budgeted in 2016 for Na… https://t.co/pSzDtDnjIw
— Paul Ingram (@Paul Ingram) 1540579785.0

@FoxNews @realDonaldTrump This looks nothing like the ones trump inspected earlier this summer. Could it be the fen… https://t.co/S8rzj4FwmY
— streetmedic (@streetmedic) 1540572328.0

Others took exception with the plaque.

Both the wording and its inclusion on the fence bothered people.

Years from now (if the rising temps don't get us) whatever museum is built to remember the atrocities of the Trump… https://t.co/QYaezDUY45
— Gregg Kilday (@Gregg Kilday) 1540584944.0