Donald Trump Straight Up Lied to the Press About a Supposed Spy in His Campaign, and a Republican Strategist Just Called Him Out 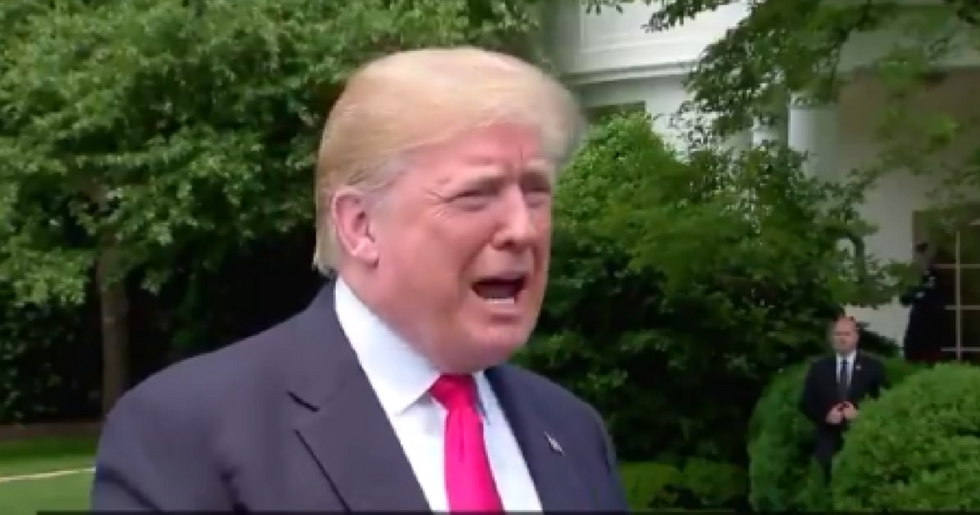 "[The President's] meandering comments include lies about the nature of the surveillance of his campaign as well as smears on the former FBI director Jim Comey, also a key witness in the Mueller investigation," Wallace said. "Attacking Comey, we understand, is the Trump legal team's entire strategy for defending the president in the obstruction of justice investigation, which hinges, at least in part, on questions about Comey's firing."

Wallace then assailed Trump's latest conspiracy theory, "spygate," which is a claim by the president that the FBI planted spies in his presidential campaign. "We also want to tell you that his new bumper sticker, spygate, is based on a lie. There is no evidence that anyone was spying on the Trump campaign."

Neither the FBI nor the Obama administration planted spies in Donald Trump's presidential campaign.

Yesterday, Trump spoke to a gaggle of reporters on the south lawn of the White House, responding to questions about what evidence he has to back claims that spies infiltrated his presidential campaign.

Spoiler alert: he doesn't have any. Here's what Trump said:

All you have to do is look at the basics and you'll see. It looks like a very serious event but we'll find out. When they look at the documents, I think people are gonna see a lot of bad things happened.

I hope it's not so, because if it is, there's never been anything like it in the history of our country.

Trump then claimed that James Clapper, former Director of National Intelligence under President Obama, admitted that there were spies in his campaign. This is wholly untrue. As Wallace pointed out, the reason there was a counterintelligence investigation into Trump's campaign was that "the good guys, American law enforcement, were watching the bad guys, American adversaries like the Russians."

FACT CHECK: Clapper told The View: "No, they were not. They were spying—a term I don’t particularly like—on what th… https://t.co/qzeTFQytMV
— Peter Alexander (@Peter Alexander) 1527167346.0

"The reason Trump's campaign is in the mix is that they ended up in close enough cahoots with Russians to raise suspicions," Wallace explained. Clapper has confirmed this to be the case.

The president continued speaking to reporters, calling his firing of Comey "a great service to this country." It was this firing that prompted the Department of Justice to appoint Robert Mueller as special counsel to investigate if, in firing Comey, Trump obstructed justice. Later, the president ignored questions over whether he still has confidence in Deputy Attorney General Rod Rosenstein, a Republican Trump appointee who oversees the Mueller investigation.

In a way @realDonaldTrump is right. #SpyGate & will be the worst scandal in US history. TRUTH: Russian spies conspi… https://t.co/cajIcYtNaJ
— Malcolm Nance (@Malcolm Nance) 1527132248.0

On Thursday morning, the president lashed out at Comey on Twitter, alleging that agents within the FBI "starting to speak out against Comey," whom Trump called a "terrible and corrupt leader."

Mueller is also probing whether Trump campaign officials colluded with Russians in an international criminal conspiracy to influence voters in the 2016 election. Now in its second year, Mueller's investigation has, so far, resulted in 22 indictments and five guilty pleas.

Three of the people who pled guilty to lying to investigators - George Papadopoulos, Michael Flynn, and Rick Gates - were all Trump campaign operatives. Paul Manafort, the former Trump campaign chair with numerous known ties to Russian and Ukranian business interests, faces a slew of charges, including bank fraud, money laundering, and tax evasion. Trump has consistently called the probe a "witch hunt."

All of this is fallout from Trump's demand that the Department of Justice releases the name of the FBI informant who relayed information from the Trump campaign. DoJ officials are scheduled to meet with Congress today.

Indeed, these actions constitute a perilous deviation from standard operating procedure. The president's meddling in DoJ affairs, including demands that names of informants be released, sets a dangerous precedent.

Weaponizing the Justice Department in a systematic effort to target political adversaries and "investigate the investigators" is not only a descent into authoritarianism; it's a coordinated effort by Trump and his allies to erode public trust in our institutions.

Listen up, @realdonaldtrump: There is ONE Spygate; there will only ever BE one Spygate. Spygate is TAKEN as a name… https://t.co/AMADZuf0ea
— Seth Abramson (@Seth Abramson) 1527137379.0