The NFL's New Anthem Policy Sounds Like It Was Written by Trump, and the Players' Union Just Clapped Back 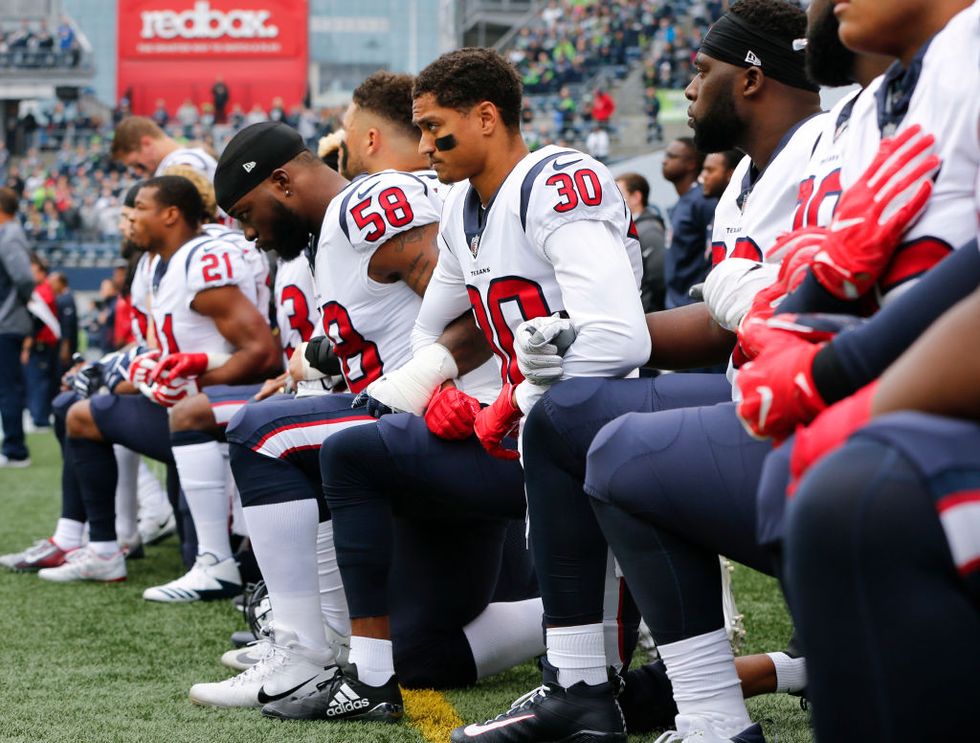 SEATTLE, WA - OCTOBER 29: Members of the Houston Texans, including Kevin Johnson #30 and Lamarr Houston #58, kneel during the national anthem before the game at CenturyLink Field on October 29, 2017 in Seattle, Washington. During a meeting of NFL owners earlier in October, Houston Texans owner Bob McNair said "we can't have the inmates running the prison," referring to player demonstrations during the national anthem. (Photo by Jonathan Ferrey/Getty Images)

NFL owners have unanimously approved a new national anthem policy that would require players to stand if they are on the field during the performance. If the players do not stand, their team will face fines.

NFL Commissioner Roger Goodell said in a statement that the policy was approved "in concert with the NFL's ongoing commitment to local communities and our country."

"We believe today's decision will keep our focus on the game and the extraordinary athletes who play it––and on our fans who enjoy it," he continues.

NFL Commissioner Roger Goodell said during a news conference that teams whose players and personnel do not stand an… https://t.co/6TliONoPVZ
— CNN (@CNN) 1527100916.0

The complete statement is below.

"The NFL chose to not consult the union in the development of this new 'policy.' NFl players have shown their patriotism through their social activism, their community service, in support of our military and law enforcement and yes, through their protests to raise awareness about the issues they care about," the statement read.

Adding that they would "review the new 'policy,'" the NFLPA said the vote by the owners "contradicts the statements made to our player leadership by Commissioner Roger Goodell and the Chairman of the NFL's Management Council John Mara about the principles, values and patriotism of our league."

The NFL's announcement was met with praise from the White House.

Vice President Mike Pence tweeted the news along with this simple caption: "#Winning."

But the move was quickly met with heated criticism.

Cameron Kasky, a survivor of the February mass shooting which took place at Marjory Stoneman Douglas High School in Parkland, Florida, said that the policy is "a great way to address the terrible brain diseases torturing former players to death." (Kasky was referencing studies which have revealed the link between football and traumatic brain injury, particularly one which found that the overwhelming majority of deceased NFL players had chronic traumatic encephalopathy (CTE), a degenerative brain disorder associated with repetitive head trauma.)

I’m glad the @NFL is no longer allowing kneeling during the national anthem. That’s a great way to address the te… https://t.co/yk6uEbulDi
— Cameron Kasky (@Cameron Kasky) 1527102714.0

"The NFL is about 70% black. If united and didn’t take the field at all, it would upset a lot of people and a lot of executives," wrote Dominique Hamilton, a defensive tackle with the New York Giants. "Today the NFL went backwards not forward. The NFLPA was not made aware of this new policy."

Previous NFL policy required players to be on the field for the anthem but did not mandate them to stand. In 2009, NFL players began standing on the field for the national anthem before the start of primetime games. Prior to 2009, "players would stay in their locker rooms except during the Super Bowl and after 9/11," according to Axios.

But NFL players standing during the national anthem only became a hot-button issue after former San Francisco 49ers quarterback Colin Kaepernick chose to kneel during the 2016 season, sparking a national conversation on the perils of systemic racism and police brutality.

When asked why he refused to stand, Kaepernick replied: “I am not going to stand up to show pride in a flag for a country that oppresses black people and people of color. To me, this is bigger than football, and it would be selfish on my part to look the other way. There are bodies in the street and people getting paid leave and getting away with murder.”

Kaepernick later filed a grievance with the NFL for collusion to keep him out of the league. The filing alleged the NFL and its owners “have colluded to deprive Mr. Kaepernick of employment rights in retaliation for Mr. Kaepernick’s leadership and advocacy for equality and social justice and his bringing awareness to peculiar institutions still undermining racial equality in the United States.”

Internal team documents unearthed this week in the collusion case against the league revealed that NFL teams view Kaepernick as a good enough player to be a starting quarterback in the league. Despite this, Kaepernick has not started a game since the 2016 season with the San Francisco 49ers.

The NFL's policy change has come under attack for appearing to cave to President Donald Trump's relentless criticism of players––particularly Kaepernick––who lean during the national anthem.

“I watched Colin Kaepernick, and I thought it was terrible, and then it got bigger and bigger and started mushrooming, and frankly the NFL should have suspended him for one game, and he would have never done it again,” Trump told Fox News’s Sean Hannity in an interview conducted before an audience at the Harrisburg Air National Guard Base last year, shortly before Kaepernick filed his grievance with the NFL.

Last spring, the president took credit for Kaepernick's failure to be signed by an NFL team since breaking from the 49ers.

“There was an article today…that NFL owners don’t want to pick him up because they don’t want to get a nasty tweet from Donald Trump,” the president told a crowd at a rally in Louisville, Kentucky at the time. “You believe that? I just saw that. I said, ‘If I remember that one, I’m gonna report it to the people of Kentucky because they like it when people actually stand for the American flag.’”