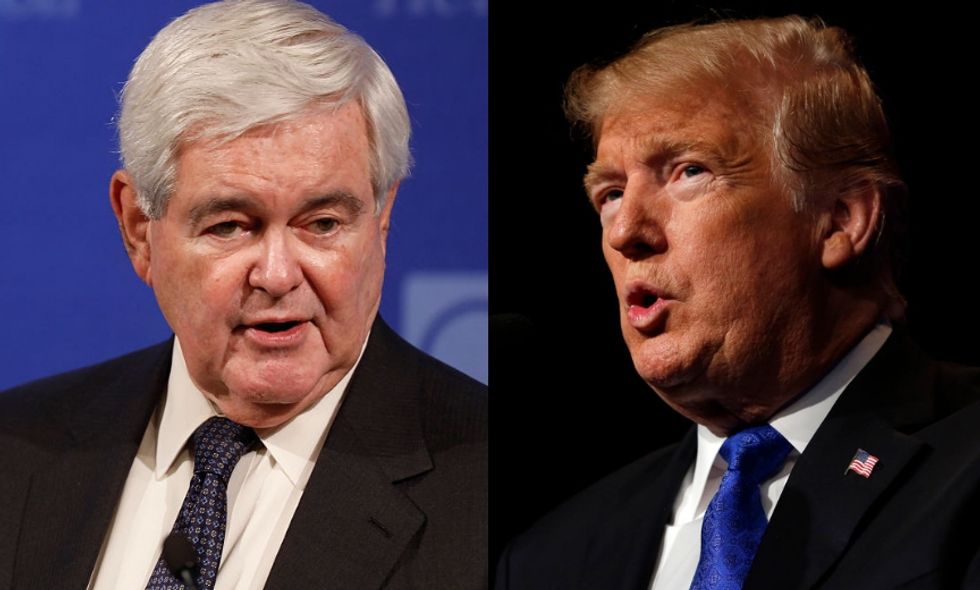 After weeks' worth of leaked White House schedules revealed that President Donald Trump has spent 60% of the last three months having "executive time," Americans were chiding the President for remaining in the residence to tweet and watch television all day.

As a result, Trump allies are frantically praising the President's productivity, with White House Press Secretary Sarah Huckabee Sanders insisting that "the results speak for themselves."

The distortions of the hate Trump movement are never more obvious than in the reaction to the President’s leaked sc… https://t.co/XqU87eKpWD
— Newt Gingrich (@Newt Gingrich) 1549282687.0

Presidential schedules(like all leaders) should be based on achievement not activity. Reagan spent every August at… https://t.co/nlzh1RDz7F
— Newt Gingrich (@Newt Gingrich) 1549285081.0

Gingrich then promptly resorted to the talking points.

His assertions on Churchill weren't entirely accurate. The Prime Minister was reported to have slept from 3:00 am to 6:30 am, with a nap from 4:30 pm to 6:30 pm. Unlike Trump, he hardly used 60% of his time in unstructured solitude.

Churchill did not sleep late. He awoke about 7:30, and read newspapers and documents while in bed. More broadly, ap… https://t.co/WBWnQxLvXr
— Jeff Greenfield (@Jeff Greenfield) 1549294919.0

What's more, many didn't appreciate the comparison of Trump to one of the greatest leaders of the 20th century.

@newtgingrich Churchill was good at his job, and also he wasn't a dimwitted fluorescent tangerine feeb with a tangl… https://t.co/TycyMc8WYc
— Jeff Tiedrich (@Jeff Tiedrich) 1549287396.0

@newtgingrich Your audacity to compare Trump to Churchill makes you an even bigger ignoramus than I originally thou… https://t.co/nsxBOe9d4T
— Nancy Lee Grahn (@Nancy Lee Grahn) 1549307516.0

@newtgingrich Churchill didn’t spend most of his day ranting on twitter about stuff he saw on the TV
— Venerable Bidet (@Venerable Bidet) 1549287089.0

They had a lot to say regarding the President's accomplishments as well.

They were quick to correct some of those assertions as well.

@newtgingrich You left off record deficit explosion! That will be remembered by those who have to fix it in the future.
— Wendy Lueker (@Wendy Lueker) 1549302345.0

Gingrich couldn't get a break after using Churchill to defend the President. Not to mention, Trump himself resents comparisons to Churchill. Maybe Gingrich should have read up on his history first.